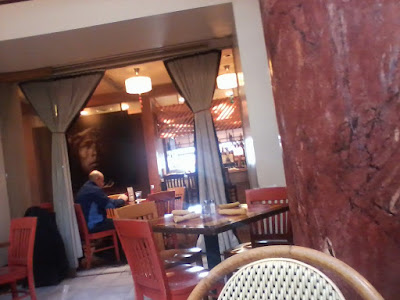 
As a brief Saturday night update, I just want to relate that I had a wonderful time with my mom yesterday. I took her to Trade, Commissary (at the bar), Floriana (where we had dinner and then a drink downstairs in the grotto bar, although it was quite crowded at that point), and then on to Larry's Lounge (where Dave J. and Gary showed up). Earlier, we also had lunch at Thunder Grill at Union Station (I took off the afternoon from work).
She stayed at the Embassy Inn on 16th Street so everything was walkable close. She is back home now. 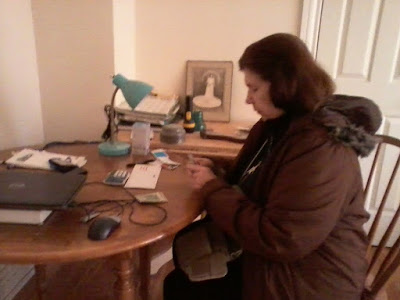 My mom in my apartment in the Hampton Courts, Washington, D.C., 4:20PM December 18, 2015.
This was the first time she had ever been in my apartment -- or, for that matter, any of the four separate apartments in which I've lived in D.C. back to early 2001.
Two items: (1) the wedding picture just beyond her is of my maternal grandmother on her wedding day in about 1947; (2) the lamp and box next to it (with a general-purpose 60W-equivalent LED "bulb") is my "White Elephant" gift that I'm bringing to a holiday party tonight. The bulb cost almost as much as the lamp ...
******* 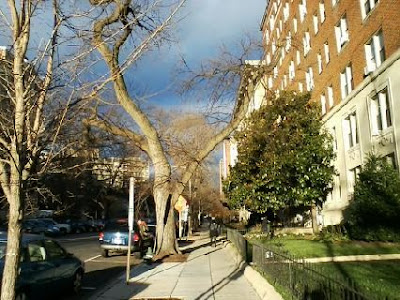 
Today, I went to the gym and I'm doing a load of laundry. Tonight, as alluded to above, I'm going to Jake and Matt's party later in Ballston / Arlington.
Tonight actually feels wintry cold but record warmth is forecasted or Christmas Eve day (72F for a high in D.C.) and 60F+ warmth on Christmas Day. As I mentioned here, the Buffalo trip is off due to a total lack of any snow, but I still owe the $$$ for it.
OK, that's all for now. Jukebox Saturday Night entry to follow shortly.
--Regulus
Posted by Regulus at 8:24 PM