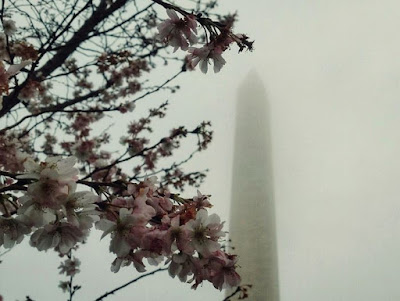 The Washington Monument seen in the fog with cherry blossoms in full bloom earlier today, December 9, 2015.
This picture was taken by Flickr user gypsybug and posted here and featured in this CWG entry.
I'm unsure what type of blossoms are these. They might be an actual fall-blooming sort rather than ones that have blossomed because of the warm weather. Unsure.
*******


Apologies for lack of an entry last night.
It was a non-gym night and instead I went out with some co-workers who were in D.C. from our Denver office as well as the head of our company. We went to Chinatown, which was mobbed ahead of a Capitals game at the Verizon Center, and met at Clyde's, which was also mobbed. We managed to find a seat in the bar area, although an Eastern European waiter came over and yelled at us for sitting there without seeing the hostess.
Two of our party of seven stayed for the Capitals game and the rest of us walked to Old Ebbitt Grill (yes, I realize Clyde's and Old Ebbitt are owned by the same company), where we had a nice dinner. Thereafter, we walked past the White House and down to the Mall and joined up with one of the other two who had gone to the hockey game.
We walked to the base of the Washington Monument, at which point the decision was made not to continue on to the Lincoln Memorial via the Vietnam Memorial or, alternatively, the Korean War Memorial. The others got an Uber and I was able to get a perfectly timed cab where the Mall intersects 17th Street. They headed back to Rosslyn where they are staying and I went to Larry's Lounge, where I met up with Dave and Gary for a bit.
As for tonight, tonight is a non-gym night as well. I'm going to go on Thursday instead, which is a far better way to roll into Friday and the weekend. My weekend is a bit up in the air since I'm unsure if I will be going to a funeral in Delaware or not on either Saturday or Sunday.
As for the gym, I am still annoyed by Monday night's episode with the trainer and that frickin' hip hop rap music that he tried to put on. It's so wildly inappropriate. I hate that instant hot-head behavior of young men such as that, and the fact that I have to engage in those kinds of encounters. He isn't a frickin' DJ and he does not own the gym. It's also a YMCA and that kind of music is just not appropriate for the place.
The fact that the same set of two dozen or so songs has been played for 2 years is actually a direct consequence of this having been a problem with previous trainers. (I'm not crazy about all of them but they aren't offensive.)
The weather today is unexpectedly foggy, gray, and chilly with temps. around 46F in lieu of the way-above normal sunshine and warmth that is being so eagerly anticipated by so many, esp. for this weekend.
We continue to have not a sign of winter weather in the offing, and while everyone at the CWG is thrilled with that fact, I find it annoying. I have been reduced to looking at the Day 10 to Day 16 "fantasy panels" of the deterministic GFS (the easiest for me to find) to see if there is any pattern change that would make the Buffalo Christmas trip worth while.
It continues to be disappointing with the occasional promising model run replaced by a subsequent model run showing nothing.
Meanwhile, in western Washington state, storm after storm is hitting the region with heavy coastal / lowland rains and tremendous amounts of snow in the mountains, in particular on Mount Rainier.
Here is the current NWS point-grid forecast for Mount Rainier through Saturday:

NWS icon and text forecast for the grid point of Mount Rainier, Washington, for the period Dec. 9 - 12, 2015. Click on image for larger / legible version.
So, yes, dear children, that is to 116 to 154 inches of snow forecasted just through this coming Saturday afternoon, and, no, I would not want anywhere near that amount of snowfall.
*******