The Monkey of Mons, Bats in the Belfry, and Getting Back Into SHAPE -OR- On Again Giving Birthday Thanks in Suburban Maryland 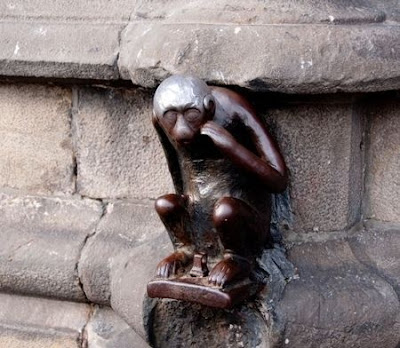 
So here I am in Millersville somewhere in suburban Maryland (Anne Arundel County) at my mom and Ray's place for Thanksgiving (also coincidentally by birthday) and part of Friday. (I really don't like having a birthday that is always subsumed into the Thanksgiving holiday -- even when it isn't specifically on Thanksgiving, though this year it is.)
For starters, I'm a bit annoyed that I failed to go to the gym last night because my next planned visit won't be until Saturday, owing to the holiday visit here. I was going to go to the gym last night but my Monday night workout was quite good and I was sure that anything I did would be mediocre. 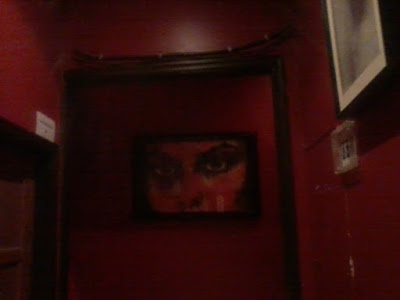 
Alas, instead of a mediocre workout, I had a night of way-too-much drinking excess that included stops at Commissary, No. 9, Local 16 (where I met Dave J.), and then, yes, Larry's Lounge where things just sort of descended into a haze. I do recall Gary driving me the short distance home. (A lot of my going out stories seem to end up that way.) 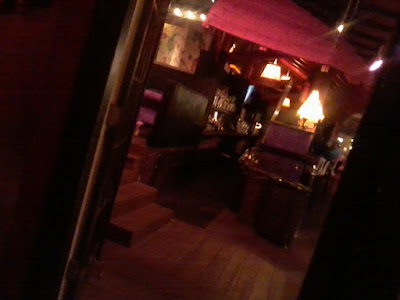 
Now I just feel flabby, or at least like I'm going to put on weight rapidly -- never mind the 30 miles I jogged between Monday, Nov. 16th and Monday, Nov. 23rd in five (5) distinct gym visits (including one during my brief Pittsburgh work trip), along with all the weightlifting, and the core workouts, plus some swimming.
All the gain disappears in a flash, or so it feels, what with my 46th birthday arriving tomorrow, plus the body type that I have. It's a one-way journey this trip through life. (That reminds me -- I have to change my age in the "About Me" section on the right of this blog.)
Oh, and I'm flat broke until Friday when I am supposed to get paid. 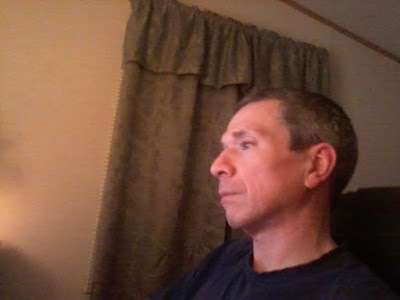 
Anyway, my shortened day (we had early work dismissal) was very hung over but I turned in a draft presentation on V2X technologies. I got over to mobbed Union Station and was able to quickly get a MARC train to Odenton. The train was also, predictably, mobbed and I had to stand the whole way, but it is a quick ride. 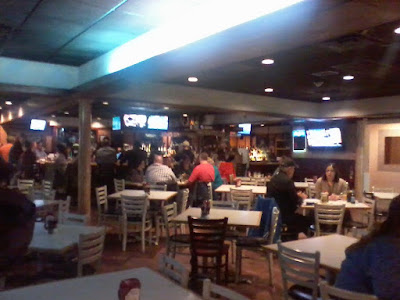 
My mom and Ray met me at Odenton and we drove to Millersville, stopping at an unusual place I had not before been on my very intermittent trips to visit them in Anne Arundel County. We went to a place called Hellas Restaurant and Lounge, a combo Greek restaurant and large suburban saloon. We sat on the saloon (bar) side. 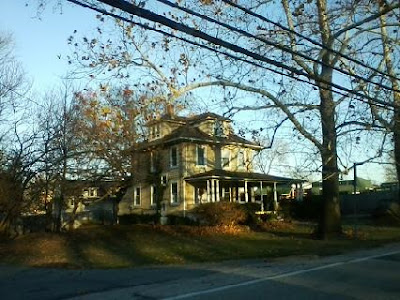 
I'm now back at their place in Rolpark ensconced in the back (front) room of the little trailer. The place is quite cozy. They've been here for over a decade now. This over-55 trailer park is located off Veterans Highway in a sort of Anne Arundel County suburban no-man's land and under the flight path to and from nearby BWI Airport. They are in main room watching Christmas movies on Hallmark Channel (a very benign choice compared to what some families watch). 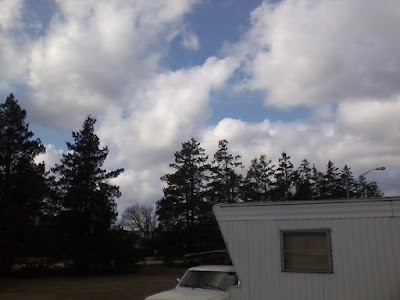 
My mom and I went through some old photo albums, and I now have an additional 15 photos to scan and post. Several of them are from where she and Ray lived in the old Casteau Homes* just outside the SHAPE NATO headquarters in (or very near to) Mons, Belgium. They lived there from Jan. 1976 to Dec. 1979. I lived there for the first three months before being sent back to New Jersey to my dad and paternal grandparents. (I was six at the time.) I visited in the summers of 1977 and 1979.
*This should not be confused with the village of Casteau. 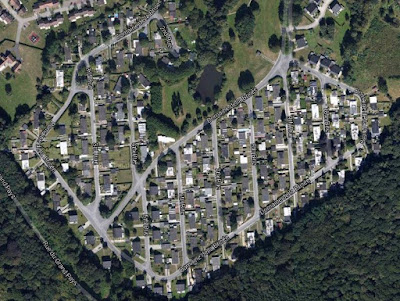 Google aerial view of Casteau Homes right outside of the SHAPE installation, Belgium.
*******


The reason I mention this is because we were looking at Google aerial and street view images of the U.S. miliSHAPE and of Mons and except for a few spots in Mons -- including the ancient Belfry of Mons, the town square, and (pictured in the lead image) a monkey statue by the City Hall building that everyone rubs for luck -- she didn't remember anything. (SHAPE stands for Supreme Headquarters Allied Powers Europe, although the joke back then was "Super Holiday At Public Expense". It is either in the City of Mons or the village of Casteau.) 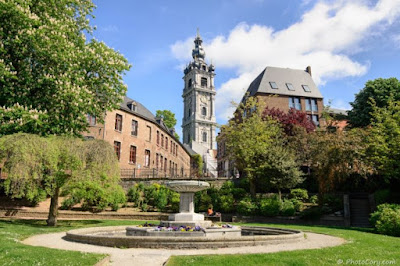 The Belfrey of Mons, Belgium, in a photo taken April 2014 by PhotoCory.
This site has some lovely images of Mons.
The Belfry was designated a UNESCO World Heritage site in late 1999.
*******


However, thanks to what my mom jotted down on the back of one image -- "#164 Casteau Homes Obour CT" -- and a guess on the Google aerial image followed by a street view, plus a fortuitously placed mail box with "164" jotted on it -- we were able to ascertain that the squat, one-story residential structure located at 164 on what is now called Domaine de la Brisée was probably where we lived, although the hedge around part of it was not there in the late 1970s. 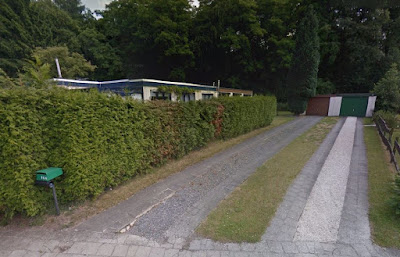 
Oh, and I saw on the same street view the house catty-corner to it where we lived and in front of which I was -- during the 3 months I lived there in 1976 and attended school -- was mercilessly bullied by the British school children until one morning my mom saw that and thereafter she rode me to school until I left to return to the States. 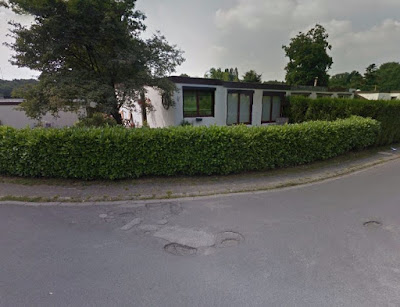 
As for Mons, she recalled we stayed at a place called the Hotel Raymond (no longer there) and ate at an Italian restaurant nearby -- where I got locked in the bathroom and let out a shrieking scream (that's a story for another time, esp. how the little Italian waiter went flying across the restaurant into the bathroom and yanked open the stall door -- I'll never forget the look on his face). 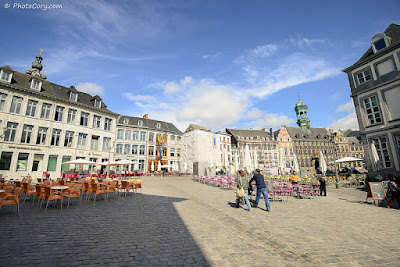 
I also promptly got diarrhea from the water and had an accident (probably the last one ever since) riding a bus. I remember later being in the hotel room bathtub.
I was 6 years old, OK?
Anyway, I'll post scanned images at a later time. 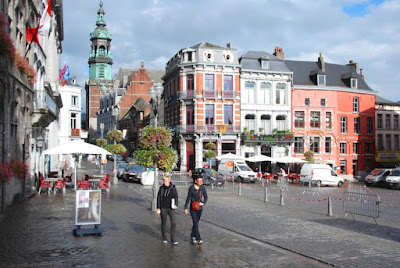 Central city square, Mons, Belgium (in what is probably a recent photo).
*******


Oh, yes, there was the following exchange in the car (and "Bon" is short for "Bonnie"):
Ray (pointing at Veterans Highway): "Bon, remember when there used to be that building down there. It was supposed to be a whorehouse."
Mom: "Ray, how would I know that?" 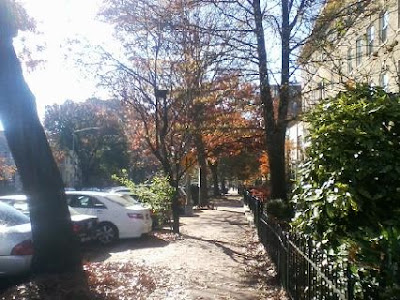 
For tomorrow, it is Thanksgiving dinner at the American Legion Post 175 in Severna Park, and on Friday during the day, I think we are going into Annapolis (at least my mom and I and Ray if his health permits). My plan is to take a MARC or Amtrak back to D.C. on Friday evening.
There is a full Moon tonight -- the Beaver Full Moon. The full Moon technically occurred at 5:44PM EST, so not quite on Nov. 26th (my birthday).
OK, I'm going to try to post my Pittsburgh pictures in a subsequent entry either later tonight or tomorrow.
Just as a concluding thought, it's so pleasant here with my mom just watching / listening to a jazzy Christmas music channel in the other room. I'm composing this entry and doing some nips of stuff I bought (mini-Riesling and two teeny Absolut Citrons).
Happy Thankful Birthday.

I am a former resident of Casteau, Belgium as my Dad was stationed at SHAPE from 1967-1973. May I use a couple of photos from this post, the aerial view of Casteau and the photo of the house surrounded by the hedge? I will list your post as my source.

Thank you for visiting my blog and asking for permission and you are certainly welcome to use them. However, I'm not really sure that it makes sense for you to give me permission as source of the images insofar as these are just Google ones -- a satellite aerial and two street-view pics.

Bottom line: The images really belong to Google, not to me. I guess if you like, you can say these are "Google street images via Regulus Star Notes blog, Nov 2015." Otherwise, you can just say "Google street images," although I can't give you the date they were actually taken, especially if Google has since updated them.

This entry is already nearly 5 years old. It doesn't seem at all like it was five years ago.

As for your time at Casteau, it's an odd thought to think that we missed each other there by three years. In fact, I didn't live there long -- just for three months between Jan - March 1976, and was sent back to New Jersey to live with my dad and grandparents. (I was only 6 and didn't adjust well there.) Instead, I mostly visited my mom when she and my stepdad were living there in the summers of 1977 and 1979.

Again, thank you for stopping by. I hope the images brought back pleasant memories for you.