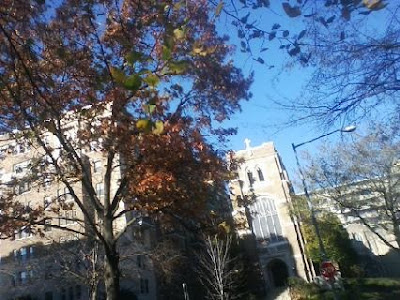 
This is just a brief personal update.
By way of explanation, I started to post my jukebox Saturday night entry, but it includes two Paris-themed songs, which naturally led me to start discussing the attacks. However, that didn't seem appropriate for that entry. In addition, I included this "brief update" at the end of it that ended up running too long.
When I moved the Paris attacks update entry into this entry, I also included this personal update -- but that seemed even more inappropriate.
As a result, I broke everything into three separate entries with this one the second.
Here is the update ...
Last night, I went to Floriana, where Dito was bartending the downstairs grotto bar. He made me this really delicious drink that I want to get again. I also want to say that Dito is just brilliant when it came to talking about Hillary and, when his regulars break into political conversation, brooks none of that typical fearful Democratic voter mewling and deep-down wussiness that basically involves having long since internalized the entire Republican Party narrative and Washington Beltway pundit-journalist conventional wisdom.
He is so correct on that. And the part about how a Dem will them run to his or her computer and -- "EEK!" -- post something "on the internet" (!) rather than doing anything else -- the way Republicans have that has allowed them to take over the entire machinery of state and local governments outside our holed up urban enclaves -- is also so true.
In short, it is so refreshing for me to hear this profoundly different narrative, since I too end up sucked into the vortex of the frickin' Inside-the-Beltway Gang of 500 political conventional wisdom whereby Dems are always in disarray, collapsing, while Hillary is always 1 minute from being indicted and we're the next election away from 1,000 years of total GOP hegemony, all because we assume the voters -- the very people we ostensibly want to help -- are so stupid that we take for granted the Republican will win.
Much of it goes back to the Bush v. Gore historical tragedy of 2000 and the Bush v. Kerry forgettable farce of 2004. (Only the Obama in 2008 was the exception that rule, but that had its own disastrous outcome in the years that followed precisely because we/he didn't grasp the sort of times in which we live. Hillary does.)
I want to write a lot more on this topic, but this isn't the entry to do it. (Oh, yes, there is a Democratic presidential debate tonight. Unlike the unwatchable Republican sideshows, I can actually watch those, but I'm not sure that I will.) 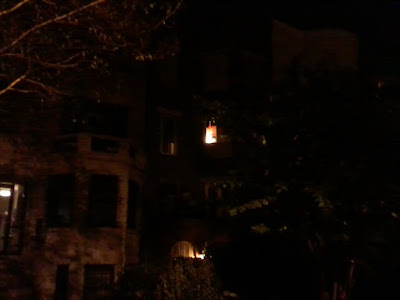 This hopelessly blurry picture shows a lamp in a window of a second floor room of a row house in the 1800 block of 16th Street NW, 2:26AM November 14, 2015.
I took it because in that room -- visible through another window that is located just to the left of the window with the lamp as seen from this perspective and, judging by the light cast by that lamp, is in the same room -- is a picture of the Madonna and Christ Child (or at least just of the Virgin Mary) on a wall that is visible. It intrigues me who put it up and that room.

The actual row house might be 1827.
To be clear, I have NEVER been in ANY row house along 16th Street in my neighborhood -- the people who live in those places live in a different world than I do -- and I am unlikely ever to do so even if I stay in D.C. until I finally drop dead, whenever that is.
*******


As for today, I had a really gym three-part workout that lasted nearly 3-1/2 hours and included 6.78 miles on the treadmill, weightlifting, and a swim.

Tomorrow, I am planning on going to Macy's (probably the one at Ballston) to buy some clothes and a new pair of shoes (including for this upcoming Pittsburgh work trip from Wednesday to Friday).
About next week, I'm very apprehensive given how much I have to do and where I am now. OK, that's all for now. Again, I'm unsure how much blogging I will be doing after tomorrow for the remainder of the week.
OK, that's all for now. Jukebox Saturday night entry to follow ...
--Regulus
Posted by Regulus at 8:43 PM