Late Night Update and with Sunday Photos Along the Avenue (New Hampshire Avenue, that is ...) 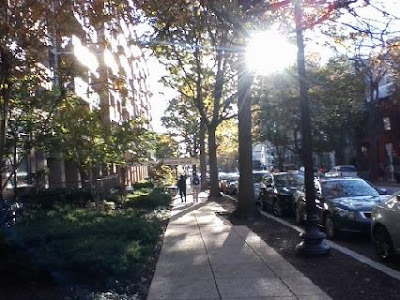 The sidewalk in the 1200 block of New Hampshire Ave next to the Hamilton House, Washington, D.C., 3:15PM November 15, 2015.
The New Hampshire Avenue images in this entry were taken on Sunday by myself as I walked to the Foggy Bottom Metro (see below).
*******


Late Monday night, although it will be early Tuesday by the time I post this entry.
I'm back from the gym, where I had a good workout -- jogging, weightlifting, and a swim, although I skipped the for-me-seemingly-ineffectual core routine. This followed a hectic day at work that started late because of last night's Larry's Lounge corner pub-turned-speakeasy-turned-sideshow excesses. I had to get a press release out and actually learned how to do the whole Business Wire uploading process. 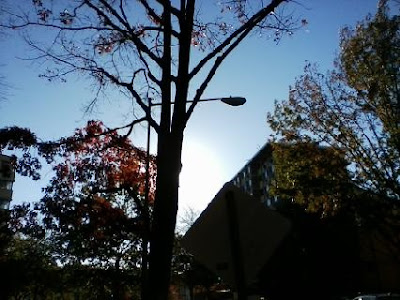 
Now for the rest of the week, it is all client work including both having to be at Forrestal all day tomorrow starting by 9AM (!) and Wednesday morning and then a road trip with two co-workers to Pittsburgh for a two-day conference. Because of all of this, I need to get to bed by 1230AM 1120AM -- so I only have an hour to post this blog entry.
No 230AM posting of entries and 245AM bedtime tonight. 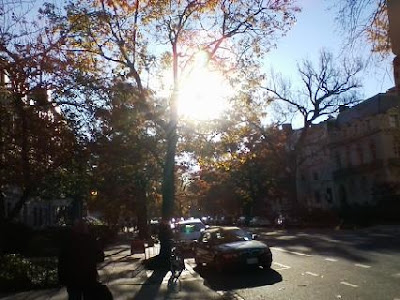 
I also may try to go to the gym again tomorrow (YMCA Anthony Bowen) since I'm unsure if I'll be able to go again before Saturday, although the hotel where I'm staying on Thursday night is quite a nice one and had a gym and pool.
Alas, I am not going to get much of a chance to see Pittsburgh itself. I've never actually been there. We return on Friday. 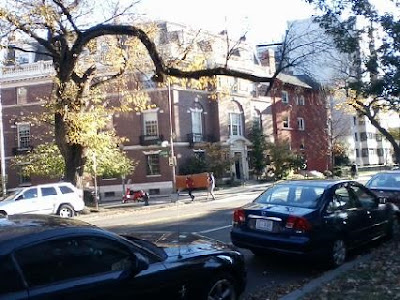 1600 block of New Hampshire Ave NW, Washington, D.C., 3:04PM November 15, 2015.
There were three young people toting an orange sofa across the avenue and down Corcoran Street. (As an aside, that stretch of Corcoran Street is lined with the female ginkgo trees and it reeks for a few months of the year when that nasty "fruit" they drop fall and are squashed open. It's disgusting.)
*******


As an update since my multiple Saturday evening entries, on Saturday night, I walked over to Connecticut Avenue to get dinner at Bistro Bistro but the place was already closed. On the walk there, I happened to meet Craig M., who was parking his old pick up truck on S Street.
I hadn't seen him in a while -- and, honestly, the last few times I had sort of tried to ignore him but I don't really want to go into that. In this instance, it was nice to see him and we ended up going to dinner at that place Sette Osteria at R and Connecticut. 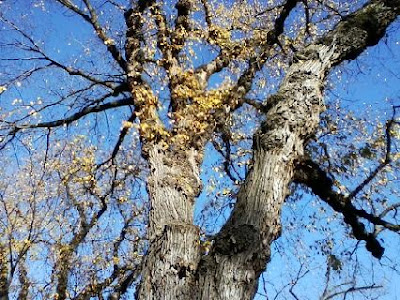 
Sette Osteria is a bit overpriced but the experience was nice (with a very attentive and friendly waitress), and it was genuinely pleasant seeing and talking to Craig, catching up, even with the one harrowing story he told me but I won't go into that now. I will say that Craig is tremendously intelligent and it's always enjoyable talking to him. (I've known him for almost 20 years.)
Craig still has an "IMPEACH BUSH" bumper sticker on the rear window of his pickup truck. I told him he might as well have a Nixon-Agnew one at this point. 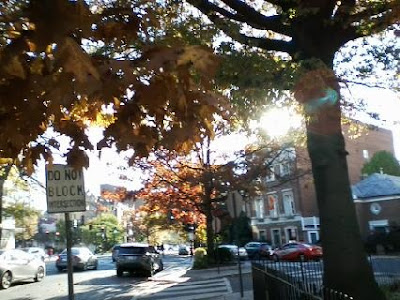 
Later, I went to Larry's Lounge, where I met Gary and Howie, and then LP and his friend Rob showed up. That was actually a fun night.
It was on Sunday that things were, well, odd. For starters, my trek to the Ballston Macy's was actually very successful -- I got three pairs of button-down shirts, a new pair of Dockers pants and a pair of dress slacks, new shoes, and a six-pack of socks all for just under $214. 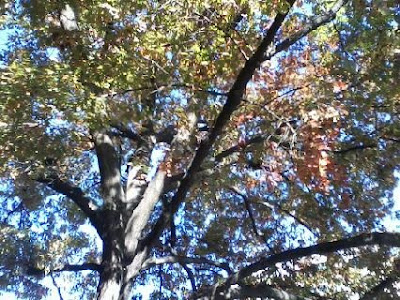 
As an aside (and as I alluded to above), the pictures in this entry along New Hampshire Avenue were mostly taken while I was walking from home to the Foggy Bottom Metro to get a Metrorail to Arlington).
I hurried back home to unload all my stuff and then went back out, first to Commissary, which has a wonderful bar-only happy hour menu of food and drink that also applies on Sunday. I then went to No. 9, where I met Roger and, subsequently, Andrew joined us. 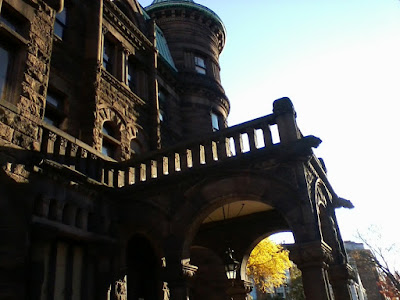 The Heurich House Museum just south of Dupont Circle, Washington, D.C., 3:13PM November 17, 2015.
At one time at least, it housed the Historical Society of Washington, or as a long-ago friend and local historian Paul used to call it, the Washington Hysterical Society.
*******


As ever, Roger and I had a really good conversation. It was after this that I went to Larry's Lounge where it devolved into the usual chaotic shit-show and, as I've pointed out before, the particulars of how the customers engaged each other there create a situation that is always well-primed for me to have occasional un-pleasantries. The irony is that this occurs precisely because the place is so festive. And to be clear, I seem to be the one with the issue. I need to be honest about that. It doesn't seem to happen with others. 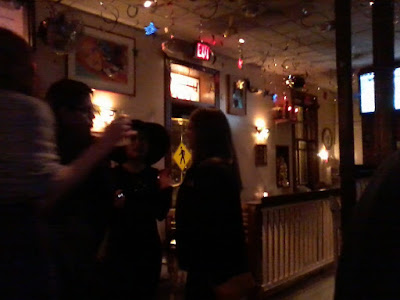 
Beyond that, though, so much goes on there at those times but, unfortunately, I really cannot relate the particulars of the behaviors of people. It's quite a story including with people I know well.
Anyway, I got home but did not get to work on time this morning. I didn't even think I'd be able to go to the gym tonight, but in the end I did and feel much better. 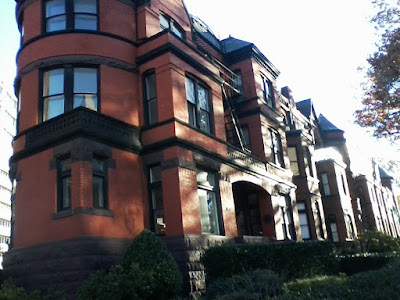 
It was a warm, tranquil day with temps. reaching 70F at KDCA, KBWI, and KDMH and 68F at KIAD. Those weren't daily records but they were well above the Nov. 16th normal highs of 58F (KDCA), 56F (KBWI), and 57F (KIAD). (KDMH doesn't have a full 30-year climate normal base period, although its partial-record normal high for Nov. 16th is 58F.)
Tonight is actually kind of chilly -- at least it felt that way to me walking the short distance home -- but otherwise tranquil.
A strong storm system is moving out of the Rockies into the Great Plains. There are multiple, widespread weather advisories in effect including blizzard warnings in parts of Colorado (including Metro Denver), winter storm warnings, tornado watches (and a few warnings), and a variety of high wind watches and warnings. 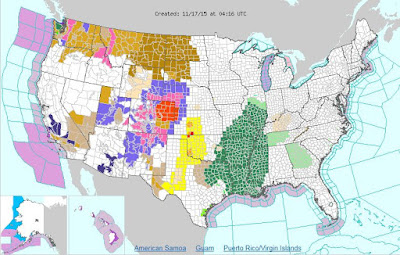 
At one point today -- although, unfortunately, I didn't do a screen capture of it -- parts of western Kansas around Goodland had BOTH a tornado watch and a blizzard warning in effect (for earlier today and tonight, respectively).
The storm system is progged to move across the U.S. and bring rain to Baltimore/Washington region by Wednesday and into Thursday as a strong cold front associated with it punches across the Eastern Seaboard.


Prior to that, though, a backdoor front that is sagging in from the northeast tonight, courtesy a sprawling high pressure over central Quebec, will be ushering in significantly cooler temps with thickening low clouds and maybe a touch of drizzle as well as some upslope showers along the Blue Ridge and Allegheny Front. 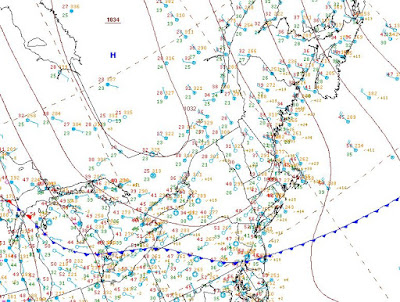 Portion of the NWS high-resolution surface weather map showing the northeastern quadrant of the U.S. and the Canadian Maritimes, valid 03Z Nov. 17, 2015 (10PM EST Nov. 16, 2015).
This shows the backdoor front and the ridging from the high over Quebec.
*******


There is also a potent storm system hitting the Pacific Northwest with copious coastal and low-land rains and multiple feet of snow in the Cascades, although the snow level is forecasted to rise to 6,000' with milder Pacific air. The severe drought that western Washington state was in seems to be over.


We're definitely starting to set up a classic major warm ENSO winter pattern -- but with no Eastern U.S. cold air courtesy a negative AO/NAO -- although, I suppose, the "fire hose" of the subtropical jet hasn't really gotten going at this point with a parade of storms hitting California (every one of which Californians should welcome before the next multi-year drought sets up). There is also the issue of whether the current major warm ENSO is a "Modoki" variety.
OK, that's all for now. I'm probably not going to update the blog tomorrow night, which means my next entry will not be until during my Pittsburgh trip. I am bringing my computer, so it will be a function of available time and internet connectivity.
Signing off now. 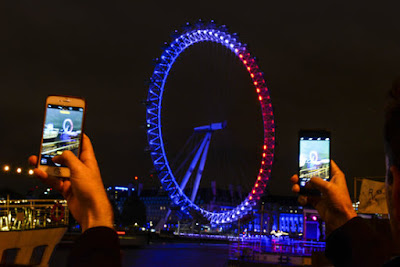 Peace out. And Peace for Paris. We're with you. 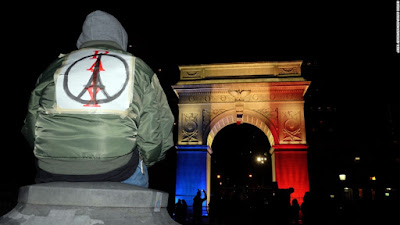 A man wears the "Peace for Paris" symbol on his jacket while looking at the Washington Square Park arch illuminated in the French tricolors of the French flag in New York City on or about Nov. 15, 2015.
*******


OK, that really is all for now. I'm already 50 minutes later signing off than I intended.
--Regulus
Posted by Regulus at 1:18 AM