Falling Through This November: Part 2, Friday Edition -OR- The Pig and The Manhattan 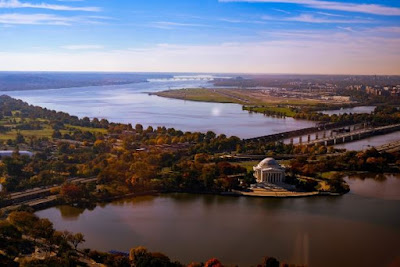 The view on a fall day from the top of the Washington Monument looking south beyond the Jefferson Memorial toward National Airport and down the Potomac River past the Wilson Bridge, October 31, 2015.
This picture by Flickr user xmeeksx appeared in this CWG entry.
*******


Apologies for no new entry last night. It was a non-gym night and I ended up at three different bars so that by the time I got home, I just needed to go to sleep.
Actually, it was a rather nice night although it ended in a characteristically and suitably weird way with Mark D. I have a very odd relationship with him, or perhaps I should say, interaction with him when I see him. It's just weird and is so for complicated reasons all the way back to when we met that night at JRs in January 1995.
Enough said. 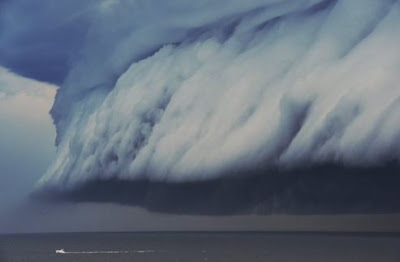 An almost apocalyptic-looking shelf cloud over the ocean near Sydney, Australia on Friday, Nov. 6, 2015.
This picture was taken by Nick Moir and is featured in this CWG entry(link embedded): Massive 'cloud tsunami' stuns Australians. The cloud formation was associated with a powerful thunderstorm that swept across Sydney.
*******


Anyway, the brief synopsis of the night is as follows:
I left work with my friend and co-worker MM and we went to the Vie de France bar in the little food court complex at 600 Maryland Ave. SW where we had a couple drinks and a very nice time. I then headed on the Metro to McPherson Square and walked to The Pig, where a former co-worker, K., was having a happy hour in celebration of her 30th birthday (!).
A number of former co-workers were there including my very good friend Andrea. Also where was my current co-worker R., and we had a really good conversation on matters political and policing.
A very D.C. thing, I know. Oh, and The Pig ain't cheap.
Actually, I have my current job ultimately because of R.'s initial assistance, and I've always been grateful to him for that.
After having a Manhattan* at The Pig that Andrea kindly bought me, she and I headed over to Larry's Lounge, where I met up with Mark D. The Hitchcock movie "The Birds" was being shown on one of the TVs. I really don't like that movie. And, as noted, I had a characteristically weird time with him.
*I asked for a Staten Island, but nobody thought that was funny. As for the Manhattan, it was quite good but dark liquor really doesn't agree with me come the next morning.
Eventually, I made it home and to sleep. 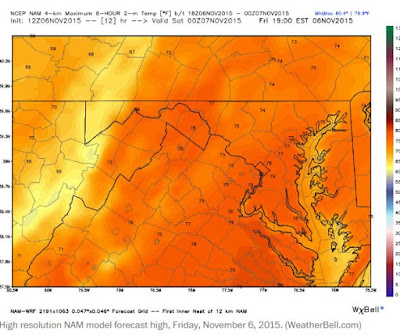 
It's ridiculously warm today for November with temps around 74F at the 11AM hour and forecasted to flirt with daily records. The high is forecasted to be 79F, which would eclipse the 78F KDCA daily record set in 1948. The KBWI and KIAD daily records are 77F and 78F, respectively.
It hasn't reached 80F in November at KDCA since, I believe, 2003 (although I need to verify that).
A front is supposed to roll through tonight and bring a chance of rain showers. Tomorrow is forecasted to be much cooler (highs in the lower 60s Fahrenheit) with a chance of needed rainfall.
I'll try to update the blog tonight, but if not, I will certainly do so over the weekend.
--Regulus