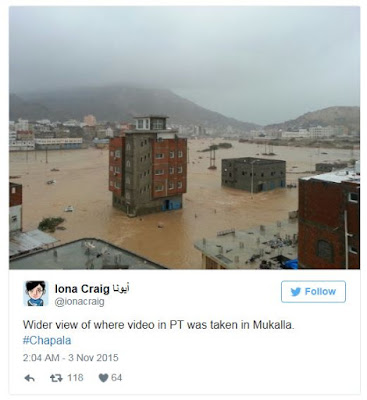 The scale of the flooding in Al Mukalla, Yemen due to Cyclone Chapala is evident in this image tweeted by freelance reporter Iona Craig at 2:04AM*, Nov. 3, 2015.
*Unsure of time zone.


The images in this entry are from a Capital Weather Gang entry and a Weather Channel website slideshow (both linked below). I've marked the slide show ones as Nov. 3rd although the website caption -- a generic one -- had it listed as Nov. 2nd, which does not make sense for the actual coastline strike. (Socotra was hit on the 2nd.)
******* 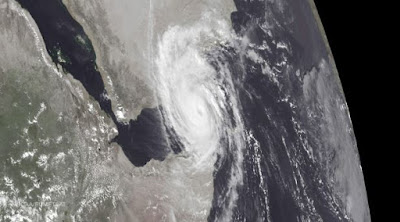 
I'm feeling guilty because I have a particular entry that I want to post, but I really don't want to ignore what happened in Yemen as a result of the basically unprecedented tropical cyclone (hurricane) strike two days ago near the coastal city the Al Mukalla.
I talked about Cyclone Chapala at length in this entry just before it made landfall in coastal Yemen. 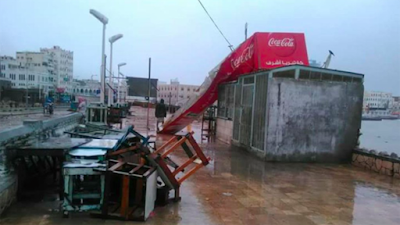 
I mentioned in my previous entry this Capital Weather Gang entry (link embedded): Historic Cyclone Chapala ravages coastal Yemen with catastrophic flash flooding.
(There was only 1 comment in that entry -- from yours truly. Compare that to any stupid political story on Yahoo and the 8,748 comments, all pure shit, that result.) 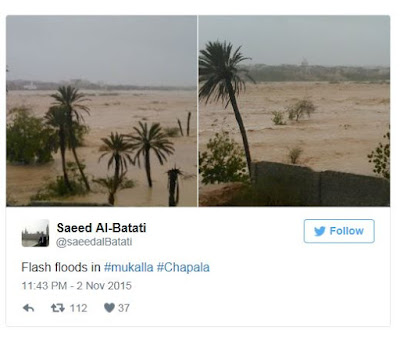 A tweet from 11:43PM* Nov. 2, 2015 by Saeed Al-Batati showing catastrophic, mud-thickened flooding in and near Mukalla, Yemen from Cyclone Chapala.
*Again, unsure of time zone.


I also included one image (reposted directly above) of a tweet showing two images of the raging torrents of water. However, that is not enough to capture what happened as anywhere from 12 to 24 to 30+ inches of rain plus coastal storm surge -- in a land that gets, on average, 2 to 4 inches of rain a year. 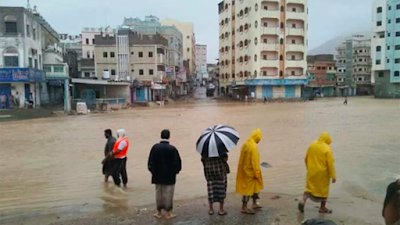 
We're talking 5 to 10 years' worth of rain in just a few days in a war-ravaged land and centered on an ancient seaside city with, at best, a Third World infrastructure and surrounded by usually bone-dry mountains primed for catastrophic mudflows in the extreme rainfall. We're talking about a city of 300,000 people totally lacking any emergency response capabilities to prepare for and handle an event that is unprecedented in the modern era. We're talking about a city controlled by some al-Qaida offshoot that couldn't begin to do anything sane and rational by way of preparations, evacuations, or anything else of the sort. 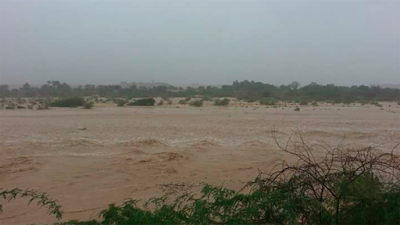 Raging floodwaters from Cyclone Chapala in or near Mukalla, Yemen, November 3, 2015.
The combination of 1 to 2+ feet of rainfall in an arid mountainous terrain created these torrents of basically liquefied mud.
*******


Bob Henson of the Weather Underground hit on some of these themes in this excellent entry. 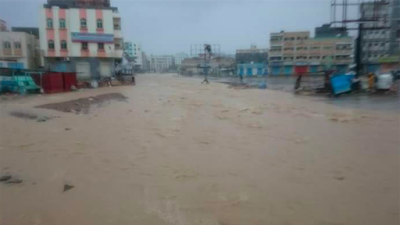 
Henson also gives a good overview of the details of Cyclone Chapala's actual strike in this follow-up entry.
He writes:


According to the Indian Meteorological Department (IMD), Chapala made landfall near 14.1°N, 48.65°E between 01Z and 02Z Wednesday (4:00 - 5:00 am local time, or 8:00 – 9:00 pm Tuesday EST). This location is about 40 miles southwest of the coastal city of Mukalla (Al Mukalla), which was slammed by Chapala's right-hand eyewall and some of its heaviest rains. Infrared satellite imagery shows a pronounced burst of convection (showers and thunderstorms) near and just west of Mukalla as Chapala made landfall.

Map and four-hour animated loop overlay of Meteosat-7 infrared imagery of Cyclone Chapala between 21Z 11/2/2015 and 1Z 11/3/2015. This shows the burst of heavy convection discussed above (due, almost certainly, to the rugged terrain).
*******


Continuing with the excerpt:
IMD estimates Chapala's peak winds at landfall as 65-70 knots (75-80 mph). India uses 3-minute sustained wind speeds, as opposed to the 1-minute average used by the National Hurricane Center. Guidance from NHC suggests that Chapala's peak 1-minute winds would likely be several percent higher. Supporting the idea that Chapala made landfall at hurricane strength, the weather station at the Riyan airport, located about 20 miles northeast of Mukalla (Al Mukalla), recorded top sustained winds of 73 mph, gusting to 89 mph, before the sensor stopped reporting. 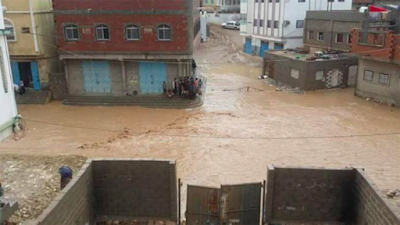 A group of people huddle on the exterior steps of a building above the floodwaters in central Al Mukalla, Yemen during Cyclone Chapala, Nov. 3, 2015.
*******


Concluding the excerpt:
Winds at Riyan were still increasing at the time, suggesting that hurricane-force winds probably occurred at some point in Chapala's path during landfall. The nation experienced a destructive tropical depression in 2008 and a tropical storm-strength cyclone in 1960, but there are no hurricane-strength landfalls on record. Satellite records extend back to 1990, while a separate IMD database goes back to 1891. 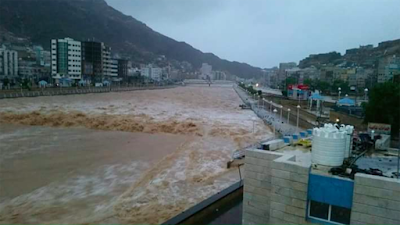 A dramatic image of the raging torrents filling a canal that runs through Al Mukalla, Yemen as a result of Cyclone Chapala, Nov. 3, 2015.
I couldn't find a name for this canal -- and I'm calling it a canal since it appears to be part of the shipping port that extends inland to the base of nearby mountains. I don't think it is an actual river of any sort (it's much too dry there for that). It might have a dry channel (wadi) extension in the mountains above the city.
Also, I cannot tell if this water is rushing in from the Gulf of Aden or is flooding down from the mountains. I have no idea of directions here. I would assume the latter, though.
******* 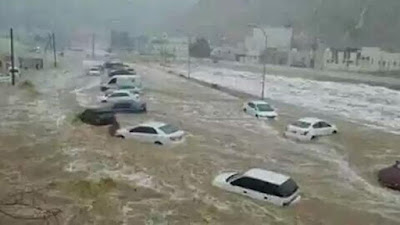 A raging torrent engulfs the cars along a roadway in Yemen in Cyclone Chapala, Nov. 3, 2015.
The cars are all so small -- although in a flood with moving water, vehicle size doesn't matter.
I'm unsure whether this is in Al Mukalla or on the island of Socotra. The Weather Channel slideshow from which it came stated it was Socotra, but the captions were very generic and were wrong with the date for the Mukalla images (all of which had to be on Nov. 3rd, not Nov. 2nd). If the image is in fact from Socotra, then it was taken on Nov. 2nd.
******* 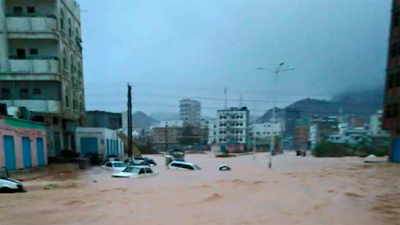 
As for images in this entry of the destruction caused by Cyclone Chapala in Yemen, the above-linked CWG entry and this Weather Channel website photo slideshow contain numerous pictures from Al Mukalla (as well as Aden and Hadramaut) -- mostly taken by individuals with access to social media accounts such as Twitter and Facebook where they posted the images. I did not seek out these original social media sources of them. (Also, predictably, the Weather Channel's slideshow is interrupted incessantly by ads that you have to skip over.) 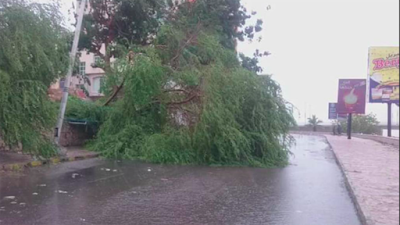 Downed trees in Al Mukalla, Yemen in Cyclone Chapala, November 3, 2015.
I didn't think Al Mukalla had that many trees given how arid is the climate (2 to 4 inches of rain a year, which qualifies as hyper-arid).
******* 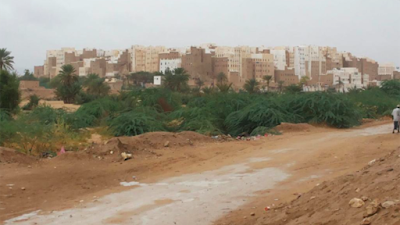 
There are no reliable reports of casualties -- fatalities or injuries -- but the scenes from Al Mukalla suggest it is high. On Socotra, where the tropical cyclone was reportedly the first hurricane-strength one since 1922 -- there were at least 3 deaths, but that seems really low given (to paraphrase Bob Henson's entry, rarity and gravity of the event).
Parts of Somalia, in particular, Puntland and its lawless coastline were also affected by the storm. 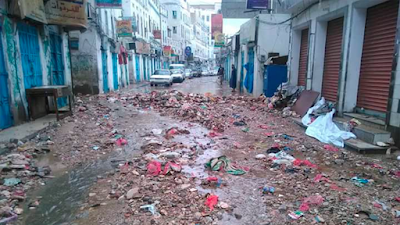 
At this point, I suspect the storm has mostly dissipated but there is residual rainfall across southern parts of the Arabian peninsula, in particular, in the mountainous terrain of the far southwestern corner. There is also enhanced convection over parts of Somalia. 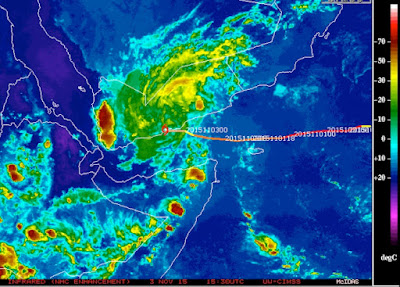 
The remainder of this entry features three images from Socotra on Nov. 2nd, 2015: 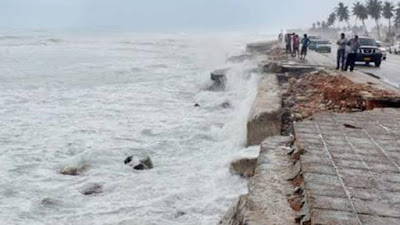 The wildly turbulent surf resulted in the partial destruction of a pedestrian promenade along a coastal road on Socotra Island, Yemen during Cyclone Chapala, November 2, 2015.
******* 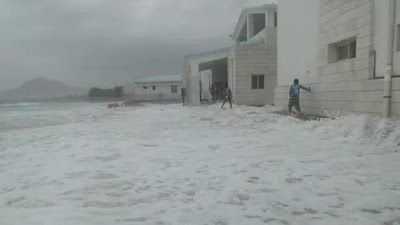 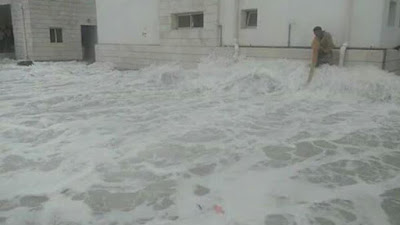 An individual gets dangerously close to and appears to be trapped by the raging surf on Socotra Island, Yemen in Cyclone Chapala, Nov. 2, 2015.
There are bad ideas, fellow, and really bad ones. Doing what you're doing falls squarely in the latter category.


OK, this concludes the entry. I'll post additional details on the storm's effects as they become available in future entries. As for the actual entry I planned to write tonight, well, I guess it's sort of nixed given the time it is now and my need to go to sleep.


I made it to the gym tonight after work, although it wasn't the best workout by any means. Oh, and it actually clouded up it's actually (briefly) a showery night here in D.C., my previous entry statement on the forecast notwithstanding. As the above animated gif radar loop image shows, the rain showers are actually moving due south-to-north and are confined to the Metro D.C. and Baltimore areas. It is still supposed to be way too damn warm on Friday (possibly record-breaking around 80F for highs).
I'll try to update the blog tomorrow.
--Regulus
Posted by Regulus at 2:04 AM