Cyclone Chapala Makes Unprecedented Strike on Yemeni Coast; Catastrophic Flooding Likely With 5+Years' Worth of Rainfall; "It Is Difficult to Overstate the Rarity and Gravity of This Event" 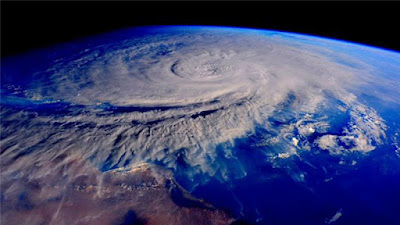 Tropical Cyclone Chapala as seen at local sunset on October 31, 2015 from the International Space Station (ISS) in a photo by NASA astronaut Scott Kelly. The southern edge of the Arabian peninsula is visible at the "top" of the picture with the Arabian Sea extending off to the south southeast.
*******

A list of all category 5 tropical cyclones* in the northern Indian Ocean since 1990 (when accurate satellite record-keeping began there) as put together and tweeted by Philip Klotzbach of Colorado State University.
This list appeared in the Chris Mooney Energy & Environment blog entry linked below.
*That is, tropical cyclones with winds of 135 knots (155 mph) or greater.
*******


Needless to say, Yemen is not a country that has any capacity whatsoever to handle an unprecedented tropical cyclone strike -- in terms of timely warnings, evacuations, and recovery from what is likely to be disastrous, indeed, catastrophic flooding and deadly mudflows in such an arid *and* mountainous place. 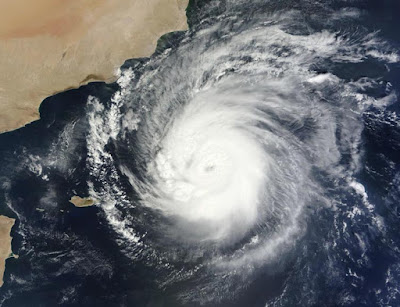 Cyclone Chapala as seen in a MODIS image from NASA's Aqua satellite on the morning of Oct. 31, 2015.
When this satellite picture was taken, Chapala was packing sustained winds of at least 135 mph, making it a very dangerous category 4 tropical cyclone.
*******


The city of Al Mukalla with a population of 300,000 is apparently al-Qaida controlled, or rather, by something called Al-Qaida in the Arabian Peninsula (AQAP), so that makes the situation much, much worse in terms of the consequences of the storm. 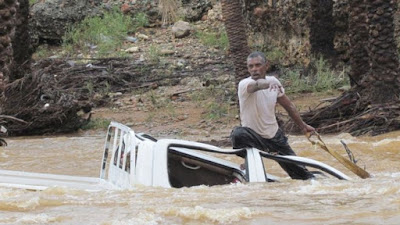 A man tries to escape from his truck after it was engulfed in flood waters on the island of Socotra as a result of Cyclone Chapala, Nov. 2, 2015.
*******


Bob Henson of Weather Underground put it well:
It is difficult to overstate the rarity and gravity of this event: a hurricane-strength storm striking near a large, ancient city, situated near mountains, with no modern experience in dealing with tropical cyclones. Although Hurricane Patricia got much more media attention, Chapala may end up bringing more damage and misery by far. The ongoing civil war in Yemen can only exacerbate the suffering of those affected and complicate relief efforts. 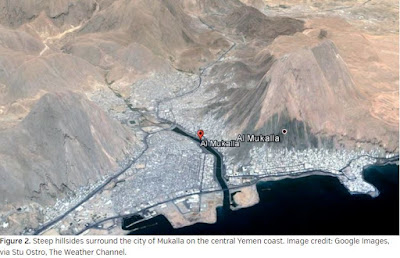 A Google aerial view of Al Mukalla and the mountains around it. Image via Stu Ostro of The Weather Channel.
This image and the two directly below come from Henson's Nov. 2nd entry (linked directly above).
*******


An excerpt of Henson's piece appeared in this excellent summary by Chris Mooney of the Washington Post's online Energy and Environment blog (link embedded): In a wild El Nino year, another rare extreme: Tropical Cyclone Chapala nears landfall in Yemen.
And here is a good Capital Weather Gang entry by Angela Fritz (link embedded): Chapala to make landfall in Yemen as first hurricane-strength cyclone on record. 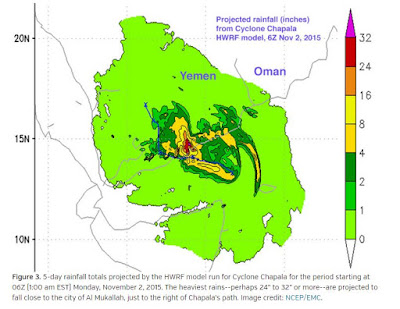 Projected 5-day rainfall total from Cyclone Chapala starting 6Z (1AM EST) 11/2/2015. The legend is inches. The highest amounts -- 24+ inches of rain -- are near the city of Al Mukalla.
These are phenomenal amounts of rainfall -- and would be in any place, but all the more incredible in a place that averages under 4 inches of rainfall a year:

A map of the average annual rainfall for Yemen in inches.
The CWG entry cites this U.K. Met Office item that this part of Yemen typically gets less than 4 inches of rain per year.
Bottom line: Cyclone Chapala will likely bring at least five years' worth of rain to parts of Yemen in less than 5 days and the consequences will be catastrophic.
******* 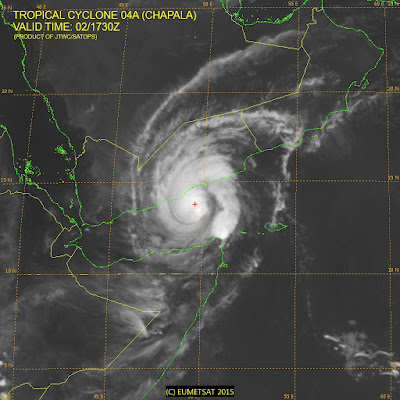 Satellite picture from Eumetsat and the JTWC satellite operations (SATOPS), 1730Z (1230PM EST) Nov. 2, 2015.
I just can't over how unusual of a satellite image this really is. It's like seeing a hurricane barreling into Los Angeles.
*******


Here is a BBC News account of the strike on Socotra (link embedded): Yemen island hit as Cyclone Chapala heads for mainland. (Note: The article headline changed at least once and may do so again.) 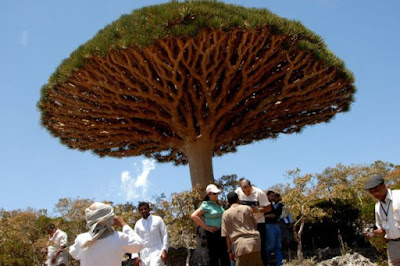 
Socotra is known for these really funky-looking (indeed, outright alien-looking) Dragon blood trees that grow only there (see above image). (Socotra consists of a main island and four tiny islands (plus some human-uninhabited rocks) are located at the entrance to the Gulf of Aden. They are not far from Cape Guardafui, which is the very Horn of Africa on the lawless Somali coast.

Topographic map of the Socotra archipelago. Click on image for larger version.
*******


There were some effects from the tropical cyclone in western Oman including the coastal city of Salalah where heavy rain fell.
Speaking of Oman ...


... here is our meteorologist friend from this entry -- I really wish I knew his name -- from Oman Meteorology / Directorate General of Meteorology -- doing a weather forecast from earlier yesterday (Nov. 2nd):
A new co-worker of mine who is from Saudi Arabia and speaks Arabic as his native language kindly watched this and gave me a general synopsis of what he is saying. I had asked him the following: "What I am curious in the video of the young Omani meteorologist is how 'excited' he is about such an unusual weather event and what is he saying ..." 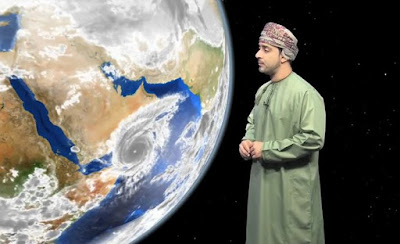 My co-worker wrote back:
"It was a very typical weather report, talking about the storm, its strength, direction, amount of rain, 10 meter waves at the sea. He said that it hit the Yemani island of Suqatra.
"He talked about where it will hit Yemen and when, and at what strength. He said that it will hit the southern part of Oman with sea waves expecting to reach 7 meters high.
"Then he talked about the expected weather and temperatures for tomorrow in several cities in Oman." 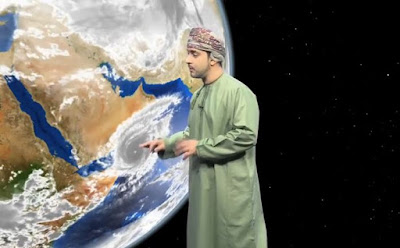 I have to say: That's awesome outfit he has on. And the satellite image is just meteorologically bizarre.
*******


OK, I'm going to sign off for now. I'm not sure how many images or news stories will actually be available from the cyclone strike zone, but I'll do my best to have a follow-up entry.
I had an OK day at work and I made it to the gym tonight. Our own weather here in the D.C. area is just dull and soon-to-be-warm (70F+ all week for highs) with no rain in sight. In short, it sucks.
--Regulus