Back from a Short and Kinda Stressful Pittsburgh Trip: Interim Update (Plus Adorable Brady Pic) 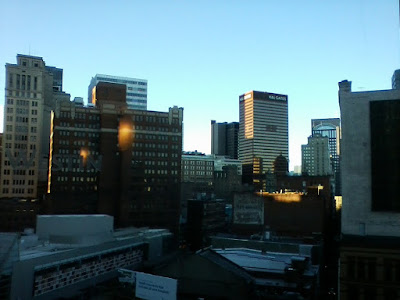 Downtown Pittsburgh, Pa., as seen from the 8th floor of the Westin Hotel and Convention Center, 7:57AM November 20, 2015.
Weather Note: It was sunny both days that I was there. As with my Buffalo trip last December, I pick a traditionally cloudy and inclement-weather city with significant wintertime snowfall and visit it when it is totally clear. Most people would love that. I'm not like most people in that respect.
*******


I've just returned from Pittsburgh (my first time there).
It was a hurried and ultimately frustrating work-related trip that included two major traffic snarls in the immediate D.C. area -- as we left on Wednesday afternoon and as we arrived back earlier this evening.
The whole trip was very rushed and included basically 10 hours in the car going and coming. Returning tonight was especially frustrating as we were in a hurry to get back to the car rental place at L'Enfant Plaza by 6PM (which we did on the button).
I would have gone a different way back but I was not the driver. However, my co-worker got us there and back safe-and-sound and was not an aggressive driver, and was doing the best he could, so I should keep that in mind. 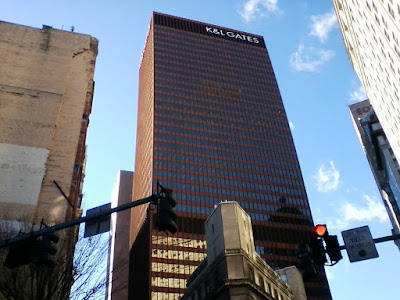 The K&L Gates skyscraper, downtown Pittsburgh, Pa., 10:56AM November 19, 2015.
All the skyscrapers in Pittsburgh have names atop them. They are also located on a warren of crisscrossing streets in an old city that make Pittsburgh appear like a jacked-up, hillier version of Buffalo. At night, all their colorful lights make them look like some futuristic city -- above a very American urban present.
*******


I'm really not in the best mood right now, and I'm not going to try to update this blog tonight in any meaningful way. I have about 40 pictures from Pittsburgh that I'll try to post but, of course, my record on posting pictures is crappy (including my last two Wildwood Jersey shore summer visits).
Pittsburgh was an interesting city -- especially the skyline as seen from the "central business district" where I was holed up the whole time -- but I'll safe that for a subsequent entry.
I just have to post this picture of Brady ... 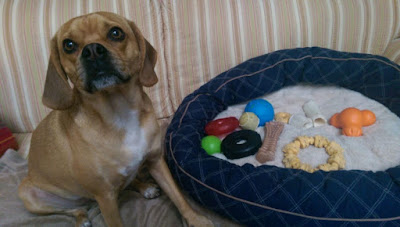 
I'm going to try to get my haircut tonight, although I might wait until Sunday. It's getting on my nerves its so bushy and the frickin' styling gel (yes, gel) I use feels awful. Maybe I'll revert to the pomade -- except it hardly works.
Tomorrow, I am planning to go to the gym and then I'm having dinner with Damon (if only because his wife and children are out of town -- that's how these meeting-up-with-straight-male-friends usually work).

Speaking of the gym, I managed to go to the hotel gym last night and even jogged a bit over 5 miles, weightlifted (a bit), and swam (in the small but pleasant 4th floor pool.
Tonight, probably just the usual Friday night stuff. I'll try to post a jukebox Saturday night entry tomorrow. The Pittsburgh update would not be until next week.
--Regulus
Posted by Regulus at 7:56 PM