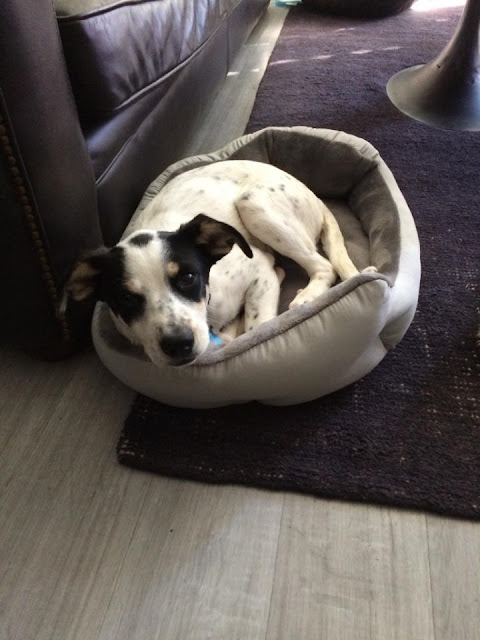 Finn rises and shines Or maybe taking an early afternoon nap ...
This entry contains pictures of my friend Chris T's dog Finn, which happens to be short for Finnegan Wakefield Bertram Shortcake.
To be clear, the pictures are topically unrelated to this brief Friday night update, although I find the images calming. (I also promised Chris I would post them.)
*******


For starters, I'm not even going to try to delve into the horrific series of Paris terrorist attacks of bombings, shootings, and hostage-taking tonight (likely perpetrated by any one of a number of radical Islamic elements) that have reportedly killed 120 people and has sent France virtually into a military lockdown. Here is a current New York Times account.
In lieu of that -- as least for tonight -- this is just a brief update. 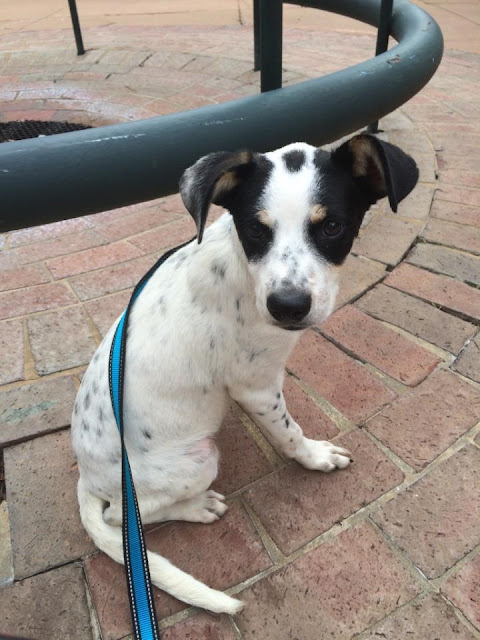 
For starters, I'm home on this gusty, cool, lovely November Friday night in my little apartment in D.C. somewhere near the triple point of Shaw, Dupont Circle, and the U Street Corridor. I have the windows open and cool air is pouring in on the intermittent, screen-rattling gusts. I'm doing my laundry (three loads) and making dinner. I rode my bike to work today and then back in the early evening darkness. Alas, the bike itself is nearing a point where it is just unrideable. 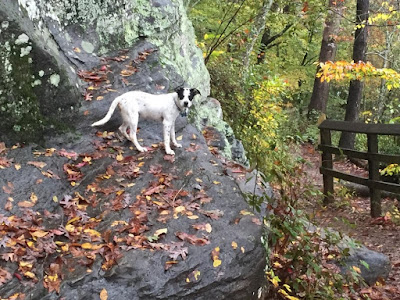 Finn in the Island Ford unit of the larger Chattahoochee River National Recreation Area (CRNRA) along the Chattahoochee River not too far from where Chris lives.
If I ever have a drag act or a Grindr handle, I'll use a variation of that name, namely, Chatta Hoochie Coochie. But neither will ever happen. Ever.
*******


Looking ahead, the weather is forecasted to be sunny and pleasant, although some more rain would be nice, followed by a warm up next week to, once again, well above normal temperatures next week with highs almost to 70F by Wednesday (and, thereafter, perhaps some rain showers in time for my 2-1/2 day Pittsburgh work trip. 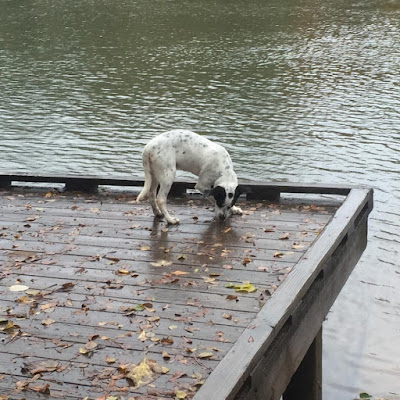 Finn shows his riparian canine curiosity.
If he decides to swim in the river doing the doggy paddle, we'll have to dub the picture "Finnegan's wake" (with an apostrophe).
*******


There are signs that this winter, at least the early part, will play out in classic big, warm ENSO style (and discounting any warm/cold PDO phases), at least in terms of increasing wetness in the Western U.S. that is beginning to make a dent in California's long-term drought, in particular, in the size of the hitherto-scary-depleted Sierra snow pack.
Whether it gets wet here in the mid-Atlantic with an energized subtropical jet stream remains to be seen. As for a cold winter courtesy a negative AO/NAO or some iteration of the PNA teleconnection pattern, or whatever, that really doesn't seem to be in the offing with the Western U.S. trough / Eastern U.S. ridge that is continually reestablishing itself, at least for now. 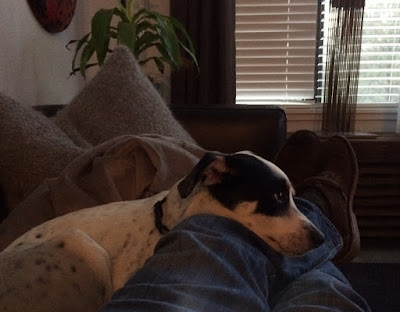 Finn resting with Chris at night at home. Life is good.
Chris used to live in D.C., but moved to Alabama several years ago for a job opportunity. Subsequently, he found an even better one in Atlanta. However, we went back to Alabama where he found Finn in a shelter in Wetumpka. Where he was from isn't clear but he was just a puppy.
As for Chris, I don't think he's ever coming back to D.C. You see, unlike Wall-P, he ... OHHHHH, never mind... As for, I'd like to go down to Atlanta and visit him and Finn for a few days in the spring -- and see a better part of Atlanta than that one and only disastrous visits in January 2004 that set my life on its current path.
*******


As for me, I have at least two significant things to complete before Wednesday, in addition to having to be on client site all day Tuesday and part of Wednesday at DOE Forrestal (something I rarely have to do).
For tonight, I think I'll just go to No. 9. I'm planning on Larry's Lounge tomorrow night. I still have that $10 card from Nellie's since this month is my birthday. I've not used the past 3 years' worth that I've gotten (and, eventually, threw out). Tomorrow during the day I plan just a regular gym Saturday afternoon. As for Sunday, I'm not really sure. My bike really isn't that good to ride much. 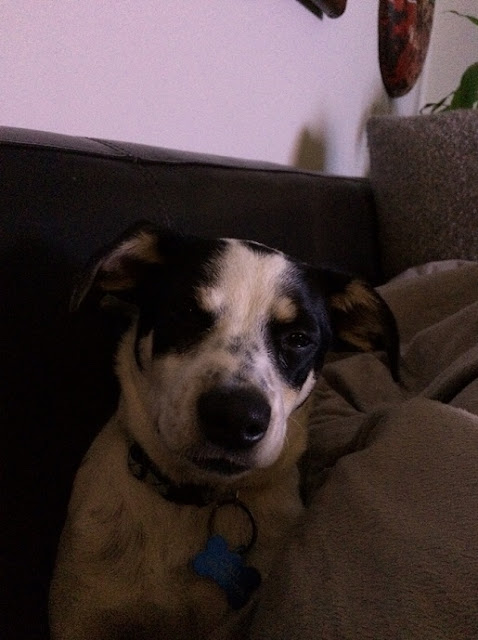 Time for beddy-bye, Finn. It's a good life.
As an aside, for reasons I can never figure out, sometimes the images come sideways and the only damn way to fix them is to copy the entire image from Paint and put it in a new Paint file as a sort of "screenshot." That forces the picture to be right-side up.
*******


OK, that's all for now. I intend to update the blog tomorrow at least for the jukebox Saturday night, but otherwise, blogging might be thin this week and will definitely will be sparse next week.
--Regulus
Posted by Regulus at 10:37 PM