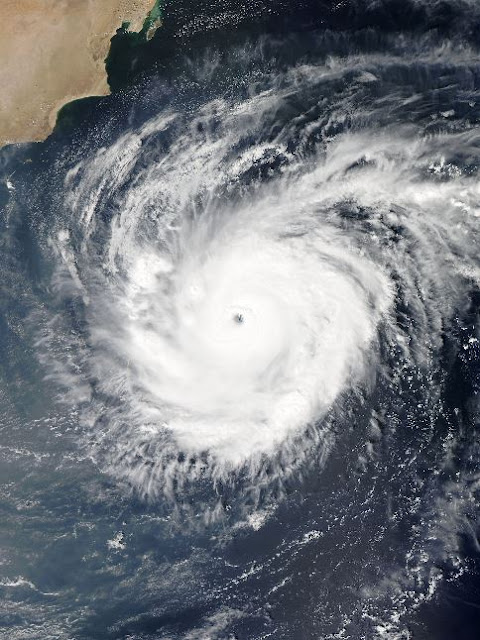 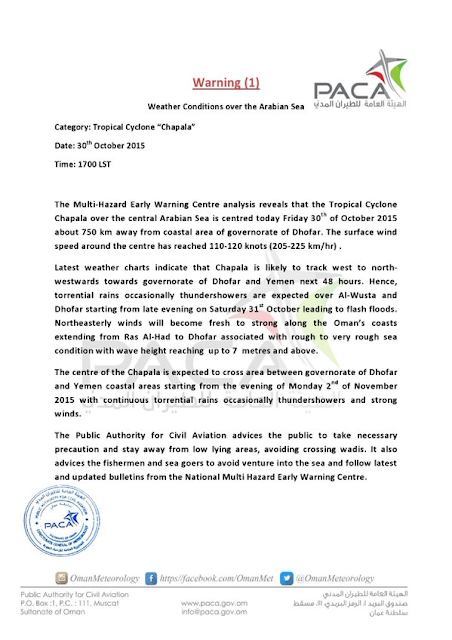 Warning from Oman Meteorology / PACA for Cyclone Chapala issued 1700 local standard time (LST) [9AM EDT] October 30, 2015.
This is something kind of awesome to read.
The warning is from the Oman Meteorology twitter account of the General Directorate of Meteorology in the Public Authority for Civil Aviation for the Sultanate of Oman. The specific link is here.
*******


As a follow-up to my earlier blog entry about the almost unprecedented impending tropical cyclone strike of the Arabian Peninsula by Cyclone Chapala, below is a reposting of a New York Times article with other relevant images (including those form Cyclone Gonu that caused so much damage in Muscat, Oman) that are interspersed to break up the text.
Cyclone Chapala, Gathering Strength, Heads Toward Oman and Yemen
By Liam Stack
Oct. 30, 2015
The New York Times
Source here.


A cyclone gained strength rapidly on Friday as it spun westward through the Arabian Sea, becoming one of the most powerful storms ever recorded in the region and threatening the coasts of Yemen and Oman with a potentially destructive landfall. 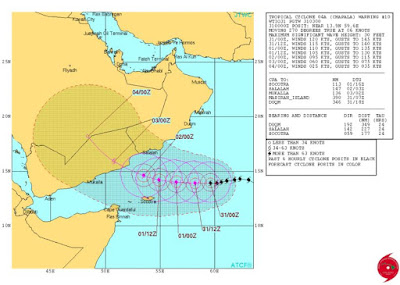 
The storm, called Chapala, intensified to the equivalent of a powerful Category 4 hurricane on Thursday and Friday, packing maximum sustained wind speeds of almost 150 miles per hour and gusts of over 180 miles per hour, according to the Joint Typhoon Warning Center, a project of the United States military based in Hawaii. 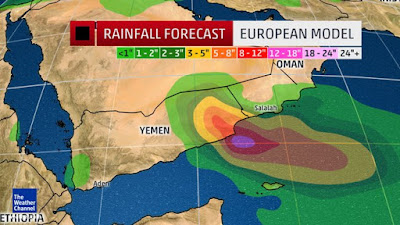 ECMWF (Euro) model's rainfall total forecast for the Arabian peninsula from Cyclone Chapala via map from The Weather Channel.
I do not know what time run this is of what I am assuming is the deterministic "Euro" run (rather than the ensembles), nor through what time period.
*******


Clare Nullis, a spokeswoman for the World Meteorological Organization, a United Nations agency, told Reuters that the storm would bring "very high gale force winds in an area that is just not used to seeing this," and said its greatest threat was the possibility of torrential rain. "The winds are a threat, but we expect the biggest impact will be from the very, very, very serious rainfall," she said. "I've seen some reports that the area might get the equivalent of more than a year's worth of rainfall in a couple of days."
Blog Editor's Note: Certain places might get a lot more than that, esp. just inland from the coast. We're talking 10 to 20 years' worth of rain in a couple of days (if the storm holds together). (BTW, what exactly does the WMO do?? I mean, other than come up with lists of tropical cyclone names??) 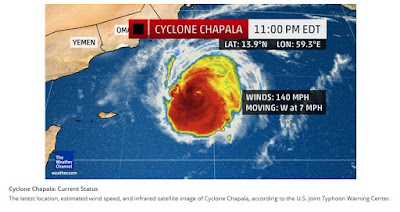 
Those rains are likely to cause flooding, mudslides and damage to buildings and other infrastructure along the coasts of both Arabian Peninsula countries, which are two of the most arid in the world, the meteorological agency said in a statement. "The forecast rainfall would represent an extremely unusual event for the area and it is highly unlikely that the natural water courses and drainage systems would be able to cope with this amount of rain," the agency said. 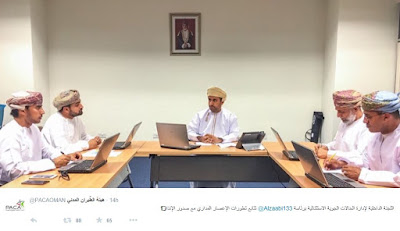 Meteorologists with the Oman Meteorology / General Directorate of Meteorology at a morning briefing in a tweet sent out at 730AM (local time), Oct. 30, 2015.
It might be the case that the guy on the far left is the same one in the YouTube video and screenshot image below near the bottom of this entry, but I can't quite tell.
******* 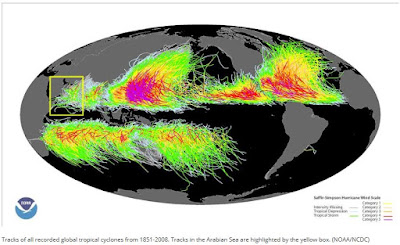 The tracks and intensities of ALL known tropical cyclones on Planet Earth from 1851 to 2008 with the Arabian Sea area highlighted in the box on the far left.
*******


On Friday night, the storm churned over the open water about 875 miles west of Mumbai, India, and 480 miles south of Salalah, Oman, according to the India Meteorological Department, a government agency in New Delhi. It predicted the storm would make landfall in the early hours of Monday morning. 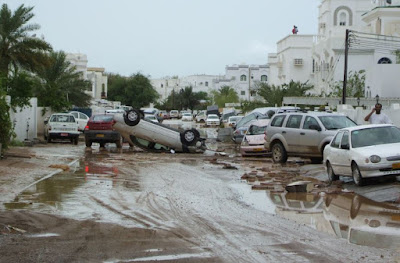 
Officials in Oman watched the approaching storm closely. In 2007, a similar storm, Cyclone Gonu, killed at least 50 people and caused as much as $5 billion in damage when it struck the country, knocking out power to the capital, Muscat, and briefly halting oil exports. This time it is another of Oman’s largest cities, Salalah, that lies in the path of the storm. 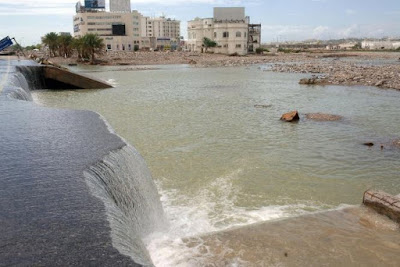 Destroyed and flooded streets in Muscat, Oman in the aftermath of Cyclone Gonu, June 7, 2007.
For all the damage with loss of life that Cyclone Gonu did to Oman, in particular, Muscat, it looks as though its center just barely brushed the easternmost tip of the Arabian Peninsula.
******* 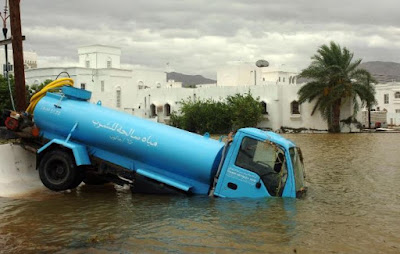 
In messages posted online in multiple languages on Friday, Oman's state meteorological agency warned residents of its southern and central provinces of torrential rains, thunderstorms and flash floods that it predicted would begin on Saturday, as well as rough seas and waves over 20 feet high. It urged residents to avoid low-lying areas and to avoid crossing rivers during the storm. It also advised fishermen to avoid venturing into the sea.
Yemen's largest cities and most of its infrastructure are in the west of the country, which faces less danger from the storm than its largely isolated east. 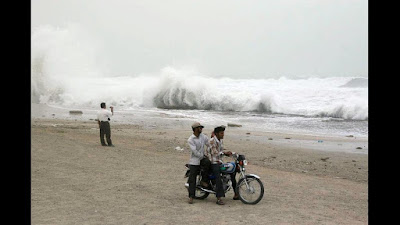 
The weather forecast from Oman Meteorology / General Directorate of Meteorology on October 30, 2015 discussing Cyclone Chapala:
The guy in this video is a sort of TV weatherman in Oman.
Here is a screenshot from the above video: 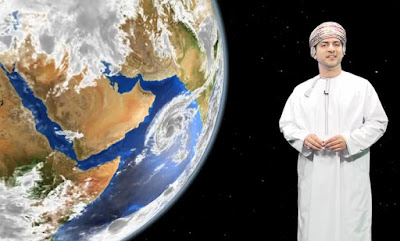 A few thoughts ... First, who is this guy?? I'm kinda curious. (God, I'm such an American.)
Secondly, it's all simultaneously so very similar and yet so totally alien.
Thirdly, only indirectly related, I had this weird dream years ago -- one of many involving family members in disturbing relations that continue -- in which I was with my late paternal grandfather in some seaside desert place with rocky terrain falling down to the ocean that was in some extreme theocracy with severe limits on all behavior. 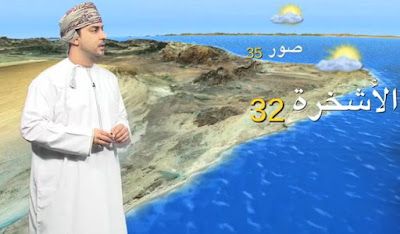 
That aside, returning to Cyclone Chapala, it looks as though the bulk of the storm will hit the far western part of the country and into sparsely populated eastern Yemen. But where it hits, if anything like 6 to 12 to 18+ inches of rain falls, the results will be catastrophic -- a fast-moving, wet cement-like slurry of mud and water that destroys everything in its path. 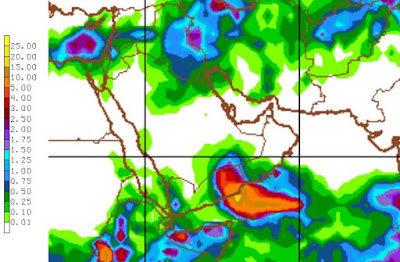 The 0Z 10/31/2015 operational (deterministic) GFS showing precipitation totals for the Arabian peninsula and adjoining regions through hour 163 / valid 18Z 11/6/2015.
It bears repeating: This is an extremely unusual forecast.
Note, as well, how much precipitation falls over other parts of the Near and Middle East from northeastern Egypt to Iraq and Iran, not to mention Afghanistan. Not sure if that is "real" or some weird feedback loop in the model physics. (Honestly, I haven't really previously paid much attention to the Africa domain run.)
*******


OK, that's all for now. I intend to update the blog later this Saturday. As for my Friday night, I went out with Andrea and Imara after work to this place called Mai Thai on 19th Street near Dupont Circle and then to Floriana before heading home.
--Regulus
Posted by Regulus at 2:59 AM