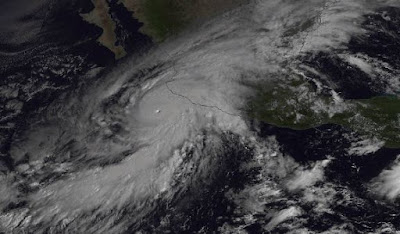 
I really need to note this historic and scary weather event happening tonight along a fortunately remote and sparsely populated stretch of the Pacific coast of Mexico:
Hurricane Patricia made landfall a short while ago at 6:15PM local time (that would be Central Daylight Time) in the seaside resort community of Cuixmala about 55 miles WNW of Manzanillo or 135 miles SW of Guadalajara somewhere near the boundary of the Mexican states of Colima and Jalisco. 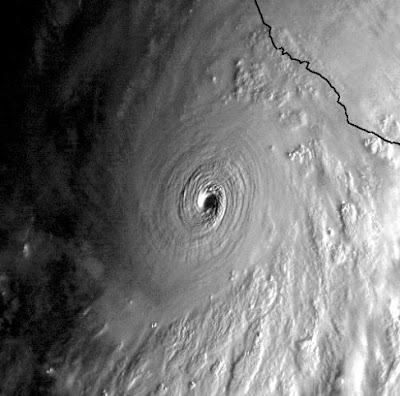 Hurricane Patricia as seen at local sunrise, October 23, 2015.
The "stadium effect" inside such a tiny eye-wall must have been totally surreal, esp. with the low-angled sunlight.
*******


For the record, Hurricane Patricia at landfall had maximum sustained winds of 165MPH and a central barometric pressure estimated at 27.29" (924mb). This represents a significant weakening from the incredible 200MPH sustained winds and central barometric pressure of 880mb (25.99") earlier today that made it the strongest hurricane ever in NWS National Hurricane Center's area of responsibility (the Atlantic and eastern North Pacific basins). However, the weakening is probably not enough to avoid major loss of life and catastrophic destruction in the affected zone. 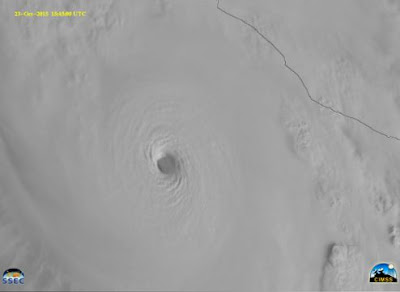 
Thankfully, the eye-wall itself is extremely small (less than 10 miles across) and hurricane force winds extend only out 35 miles from the center. Puerto Vallarta was probably most spared real devastation. 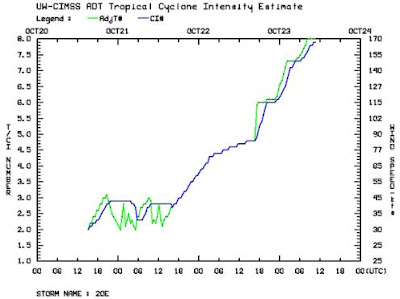 Chart showing the intensification of Hurricane Patricia between Oct. 20 and 23rd with wind speed on the vertical axis (right side).
*******


As the above chart shows, Hurricane Patricia underwent a phenomenal intensification in less than 36 hours, fed in part by the tremendous warm water sea surface temperature (SST) anomalies along the west coast of Mexico. 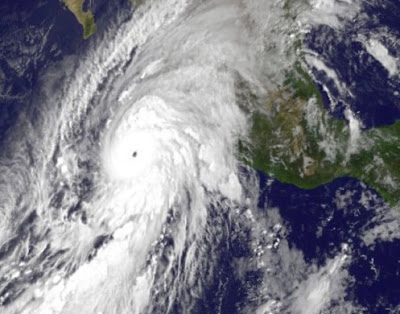 
As this CWG entry -- which has been updated throughout the day with info from the National Hurricane Center -- noted:
Patricia experienced a historic rate of intensification between Wednesday night and early Friday morning when its peak winds increased by 140 mph. It morphed from a loosely organized conglomeration of thunderstorms to the planet's strongest and most wicked class of storm.
"Patricia is estimated to have intensified 85 kt [100 mph] in the past 24 hours," the National Hurricane Center said in its 11 p.m. update Thursday. "This is a remarkable feat, with only Linda of 1997 intensifying at this rate in the satellite era." 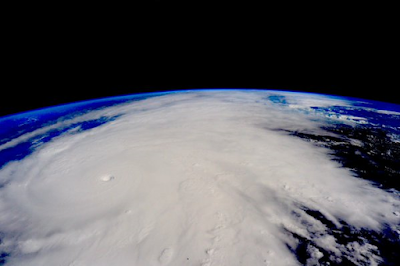 
The major warm ENSO ("El Niño) event underway contributed. Again, from the CWG entry:
Fueled by one of the strongest El Niño events since 1950, Patricia has become the 9th hurricane in the eastern Pacific to achieve at least category 4 or 5 intensity, which is the most on record.
It is the 22nd category 4 or 5 storm to form in the Northern Hemisphere this year, which is also the greatest number ever recorded.
And, yes, all these major warm ENSO events are very much linked to climate change caused by humans. 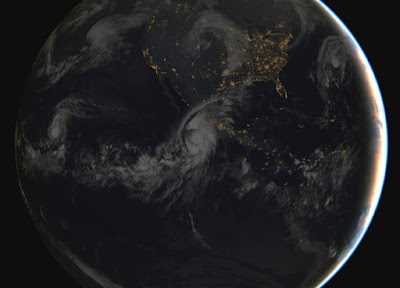 It's kind of hard to explain this picture but basically it is a composite satellite image of part of the Western Hemisphere at night with Hurricane Patricia front and center. The "composite" part is infrared data from EUMETSAT and NOAA geostationary satellites with an overlay of computer-generated model of the Earth, containing NASA's Blue Marble Next Generation imagery. Source here.
Thus, it's a real and fake image at the same time.
*******


Here is one more CWG entry (link embedded): Ten unsettling views of Patricia, the strongest hurricane in recorded history.
I took a number of the images from this entry and the other one.


Patricia will weaken very rapidly over the rugged terrain of Mexico as the circulation tracks north-northeastward. The remnant moisture is forecasted to move over Texas and the Gulf of Mexico, possibly facilitated the development of a hybrid tropical/extratropical system in the next few days. The moisture may eventually make it to the eastern U.S. along a cold frontal boundary by late next week and give us (here in the D.C. area) some needed rainfall.
--Regulus
Posted by Regulus at 9:12 PM