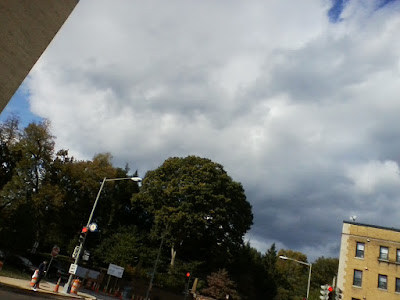 
As a brief update, last night, I went to Floriana (where I had two glasses of chianti at the downstairs bar) and unexpectedly met LP and Peter, who showed up briefly following a birthday dinner for Peter. I ended up in a conversation with WRC Channel 4 news reporter Tom Sherwood, who was there having some dinner. Sherwood is sort of a D.C. institution as a TV and newspaper reporter who covers local government affairs.
He told me a few times how he is "an agnostic," which, naturally, led to me relating my understanding of Gnosticism, to which he replied (repeatedly), "Why does anyone need to believe that?"
Thereafter, I went to Old Ebbitt Grill (taking a cab instead of walking, since it was already after 11PM). I had dinner at the Old Bar but I was unhappy with the bartender server (he wasn't the usual fellow, L., who serves me and that I like, nor was the lady bartender, A., I also like there). The service was crummy (yes, I realize he was busy) and he kept calling me "young man," which I found patronizing.
Also, a very rude blond woman with her boyfriend put a final touch on the night by coming up to me and asking in a almost belligerent tone if I were done using "these three stools." To be clear, there were two next to me that had just been vacated by another couple, and I was using the third one.
Already in a bad mood, she really pissed me off and I stormed off. I paid L. (he was down at the other end of the bar*) and walked up 16th Street back home. (I told L. that the service from the other was "like Burger King," L. apologized for that (rather than trying to defend it), and the other guy (who had walked over there by that point) heard that and remarked that he used to work there. I ignored it and left.) 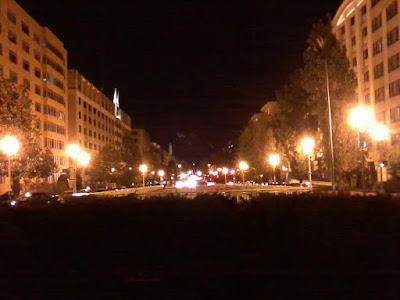 Night view from Scott Circle looking south along 16th Street NW, Washington, D.C., 12:41AM October 17, 2015.
That's the Washington Monument visible poking up on the middle left. You can also see the White House, although it's not visible in this low-resolution images, esp. since it was mostly quite dark. There were lights on in the upstairs rooms, which was an odd thought: The President and his family's personal living space.
*******


*To be clear, I had sat at the part of the bar where I saw L. working and there happened to be a spot, but he quickly moved to the opposite end and I was stuck with the bartender I did not like.
As for today, following nearly 11 hours of sleep, I had a really good, extended gym workout -- 1 hour of jogging (6.64 miles including 5 minute cool down or 65 minutes in all); weightlifting; some core workout; 5 minutes in the steam room (that's all I can stand); and 15 minutes in the swimming pool.
The weather was variably cloudy, breezy, and cool today. It reached 60F at KDCA, 58F at KIAD, 57F at KBWI, and 56F at KDMH.

The fact that National touched 60F when it was in the 50s most of the day while the other three climate stations did not is a very typical and, if I can anthropomorphize it, passive-aggressive spiteful thing it does. Invariably it will do the very thing that is the most annoying whether on temp. or precipitation, and OF COURSE on snowfall when it is always far, far, far below the other spots. Well, to be clear, KDMH doesn't report snow.) 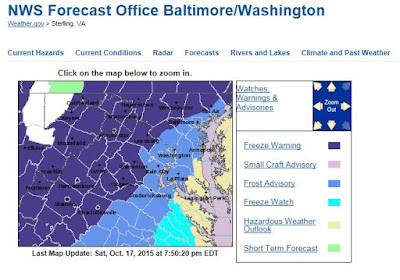 
Anyway, there is actually a frost advisory for tonight for the immediate Baltimore/Washington corridor including the District itself and a freeze warning over a widespread area to the west and north including the Piedmont of Maryland and Virginia, the Potomac Highlands of West Virginia, and the Allegheny Front (see image directly above). Garrett County, Md., and Preston County, W.Va., are not included simply because the growing season has already ended there.
To be clear, even with this frost advisory, there isn't the slightest chance that KDCA itself is going to get within 6F of freezing. The actual low at KDCA is forecasted to be 39F tonight and tomorrow night, which will more or less mimic what we have in this part of D.C. where I live.
As for tonight, as soon as I post my Jukebox Saturday Night feature, I am going to try to do another solo dinner tonight. I think I'm going to walk over to Maxime's. It's a bit of a walk to the edge of Georgetown (half hour or so) but I'd like to give it a try. I will then go to No. 9 before heading home.
For tomorrow, I'm supposed to have lunch with Wendy and then I'll take a bike ride, provided I can get air in my tires. It is supposed to be a breezy, cool, mostly sunny day with highs around 53F. Perfect autumn weather. There is still no rain in the forecast for the next week, which isn't good.
OK, that's all for now. I might not post another entry (after the Jukebox Saturday Night one to follow) until Monday night or, owing to my planned gym schedule, possibly Tuesday.
--Regulus
Posted by Regulus at 8:30 PM