Reposting the Oct.14, 2015 APOD: A Gegenschein Lunar Eclipse In the Startlingly Starry Night Sky of the Namibian Desert -OR- Celestial Soda Pop Dreams Beneath the Tropic of Capricorn 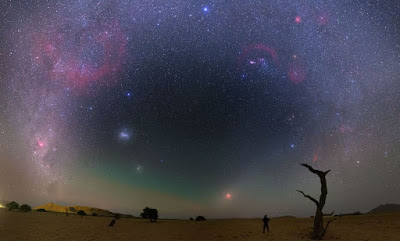 The Oct. 14, 2015 Astronomy Picture of the Day (APOD) featuring a truly spiritually beautiful night sky image taken during last month's total lunar eclipse (Sept. 27/28, 2015) as seen from Namib-Naukluft National Park in Namibia. It also features and a roll-over image showing the entire, stunning Celestial Soda Pop treat* labeled in all its glory ...
*I'm so posting this piece and its video in my next Jukebox Saturday Night entry.
******* 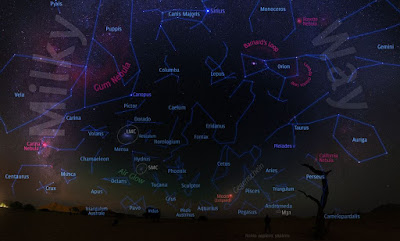 Labeled sky features; click on and/or download image for larger version.
The Southern Hemisphere night sky is just so celestially richer than the Northern Hemisphere one.
*******


Below is the full caption to the APOD image. I'm not going to include the links embedded within the text, but if you want to see them, visit the 10/14/2015 APOD page.
A Gegenschein Lunar Eclipse
Image Credit & Copyright: Petr Horálek; Rollover Annotation: Judy Schmidt


Explanation: Is there anything interesting to see in the direction opposite the Sun? One night last month, there were quite a few things. First, the red-glowing orb on the lower right of the featured image is the full moon, darkened and reddened because it has entered Earth's shadow. Beyond Earth's cone of darkness are backscattering dust particles orbiting the Sun that standout with a diffuse glow called the gegenschein, visible as a faint band rising from the central horizon and passing behind the Moon. A nearly horizontal stripe of green airglow is also discernable just above the horizon, partly blocked by blowing orange sand. Visible in the distant sky as the blue dot near the top of the image is the star Sirius, while the central band of our Milky Way Galaxy arches up on the image left and down again on the right. The fuzzy light patches just left of center are the Large and Small Magellanic Clouds. Red emission nebulas too numerous to mention are scattered about the sky, but are labelled in a companion annotated image. In the image foreground is the desolate Deadvlei region of the Namib-Naukluft National Park in Namibia, featuring the astrophotographer himself surveying a land and sky so amazing that he described it as one of the top experiences of his life.
*******


It has been a long time since I've posted anything from Astronomy Picture of the Day site ... well, OK, not as long as I thought, but I really should post more. It's an awesome site.
--Regulus
Posted by Regulus at 11:56 PM