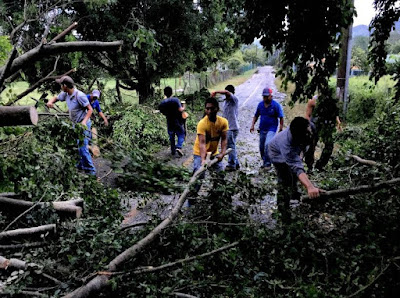 
As a follow-up to my previous entry about Hurricane Patricia, the awesomely powerful tropical cyclone slammed into the Mexican state of Jalisco at Cuixmala, described in this New York Times article as one of Mexico's most exclusive and secluded resorts, at 6:15PM local time (CDT) yesterday with 165MPH sustained winds -- following an early offshore peak intensity of 200MPH sustained wind / 880-mb central pressure.
However, the storm's most destructive core was quite compact and the eye-wall came ashore in such a way that it missed heavily populated places including Puerto Vallarta. 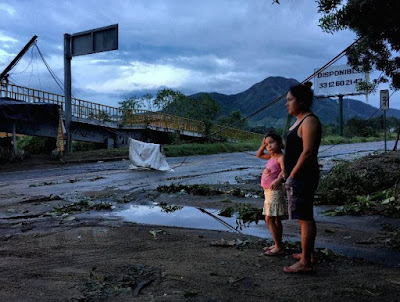 NY Times caption: Rosario Ruíz Figueroa and her daughter Gisol Airam surveyed the damage caused by Hurricane Patricia near their home in the state of Colima on Saturday (Oct. 24, 2015).
*******


At this point, damage is, thankfully, described as "remarkably little" and Mexico's President Enrique Peña Nieto said there were, amazingly, no initial deaths reported.
Here is the AP wire story first few paragraphs:
PUERTO VALLARTA, Mexico (AP) — Record-breaking Hurricane Patricia appeared to leave remarkably little damage as it moved rapidly inland over mountainous western Mexico early Saturday and weakened to tropical depression status, though authorities warned it could still cause deadly floods and mudslides
Patricia, which peaked as the strongest hurricane on record in the Western Hemisphere, made landfall Friday on a sparsely populated stretch of Mexico's Pacific coast as a Category 5 storm, avoiding direct hits on the resort city of Puerto Vallarta and major port city of Manzanillo.
There were reports of some flooding and landslides, but no word of fatalities or major damage as the storm pushed across inland mountains while bypassing the metropolis of Guadalajara overnight. 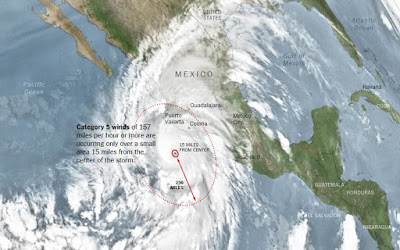 New York Times graphic: Hurricane Patricia in a satellite image with wind field size labeled, Oct. 23, 2015.
Note how small of an area were the worst of the winds -- 15 miles, making it basically, a giant tornado.
This graphic comes from this New York Times visualization article that includes an excellent animated satellite loop (alas, I cannot embed that animated PNG here).
******* 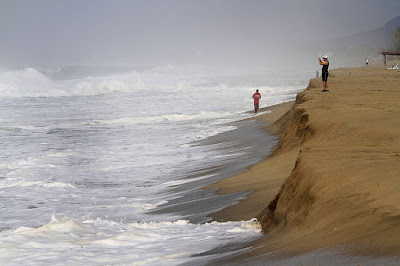 Severe beach erosion as a result of highly agitated Pacific Ocean due to Hurricane Patricia in Acapulco, Mexico on October 23, 2015.
*******


To be clear, it was a major hurricane. Here is some YouTube video shot in Manzanillo as the worst part of the storm approached including storm surge. (Remember that Manzanillo was not where the actual eye came ashore.)
Footage from an upper (maybe 4th) floor condo balcony in Manzanillo shot by "CharlieVision11" on Oct. 23, 2015 during what appears to be the storm surge of Hurricane Patricia.
*******

I can't really estimate those winds but I'd say close to 100MPH. This too was filmed by "CharlieVision11" in Manzanillo yesterday.
*******


My guess is that will change and there will have been some fatalities, especially as a result of mudslides in the hilly-to-mountainous terrain around Guadalajara. I don't see how that can be avoided, but let's hope there aren't. 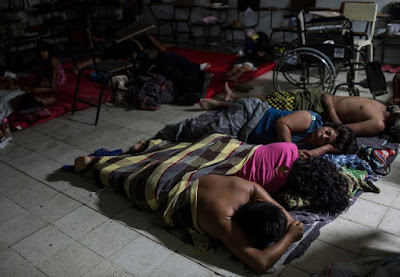 
Patricia rapidly lost strength, as expected, and is now (as of 10AM CDT / 11AM EDT) just a tropical depression located about 95 miles northeast of Zacatecas. The storm is moving quickly to the northeast at 24MPH.
There is a very large direct and indirect rain shield associated with Patricia that has made its way across much of Texas already where there are widespread flash flood watches and warnings in effect. 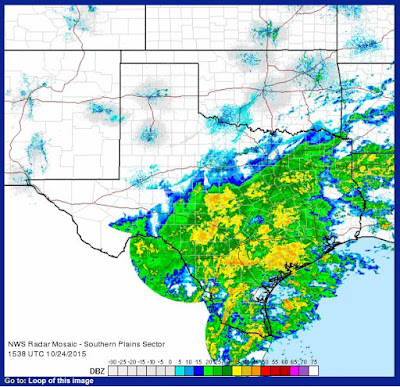 
That remnant moisture is forecasted to get caught up along a frontal boundary moving across the eastern United States by early next week and (hopefully) bring some needed rain to the mid-Atlantic including here in D.C.
Anyway, bottom line: Through a combination of location, luck, and preparation, Mexico appears to have been spared a major disaster, and that's a good thing.
--Regulus
Posted by Regulus at 12:30 PM