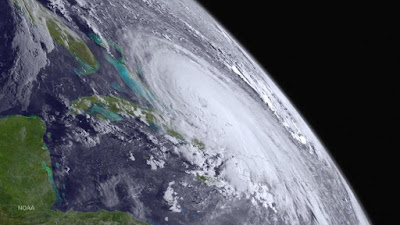 An awesome picture of major Hurricane Joaquin taken at 0800AM EDT (1200 GMT) October 1, 2015 by the NOAA GOES West satellite.
Click on image for version; if you download and open the image, you will see the full, spectacular version of it.
*******


The latest model guidance (including the 12Z operational / deterministic GFS) is strongly suggesting that Hurricane Joaquin will not, in fact, get captured by the upper level trough over the Southeastern U.S. and the storm will remain offshore of the mid-Atlantic -- those possibly impacting eastern Long Island and New England. However, confidence remains low in the track of this storm. The intensity forecast also calls for gradual weakening.
Read this CWG entry (link embedded):
Worst-case scenario from Hurricane Joaquin less likely for D.C. region, but heavy rain likely Friday into Saturday.

The current NHC track in the 2PM intermediate advisory through 8AM Tuesday, Oct. 6, 2015.
I'm expecting this to be shifted even farther to the east in the next update.
*******


Actually, I'm glad: We're going to get (are already getting) a soaking rain in a "predecessor rain event" but not going to have a disastrous hurricane strike either here or on the Jersey shore. And the storm should be weakening by the time it interacts with the New England coastline.
All's well that ends well ...


... To be clear, though, the hurricane hasn't even started to make its northward turn yet and there is still a high level of spread in all the models and model ensembles, so it's much too soon to call the all clear just yet. Nevertheless, it is more and more looking like "climatology" will win out over a Hurricane Sandy-like trough-capture scenario.
--Regulus
Posted by Regulus at 2:19 PM