Let's start out with a nice smooth jazz piece ...
"A Love Like This" by Kim Waters from his From the Heart release (2001)
Two minor issues: First, the YouTube video title omits the "A"; Secondly, the song ends around 4:30 and the remainder is just a silence featuring the same terrific view of what I assume to be Hong Kong at dusk seen from some elevated location.
*******


Here is an Old School 1980s style power ballade ...
"Never Surrender" by Corey Hart from his album Boy in the Box (1985)
What an interesting period video of the 1980s featuring a troubled young man running away from home and set to the lyrics of this song. Of course, I'm not sure the song is sending the best message ...
As for Mr. Hart, while he isn't a boy anymore -- he's 53 -- his meticulously detailed Wikipedia page indicates he is quite active and he has a website. He appears to perform on occasion.
*******


I just want to repost this song because I just like it so much ...
"Love On Top" by Beyoncé from her album 4 (2011)
I posted it originally back in this Jukebox Saturday Night edition.
I love how the tempo speeds up in increments and her voice rises with each this song, and in the video, this is portrayed as going from day to night with the Beyoncé and the dancers suddenly very formally attired (well, except for the part where her breasts are practically hanging out at one point). 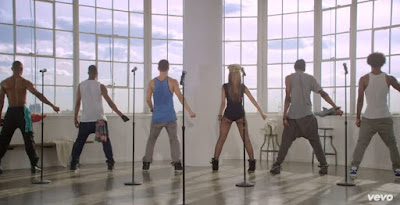 Opening screenshot of Beyoncé's Love On Top video featuring her and the five male dancers.
*******


The last portion features Beyoncé literally in a frenzy, although the very ending cuts back a to the daytime shot and Beyoncé saying "Cut!" You see the cameraman and the dancers high-five each other at having done so well.
On that point, the whole choreography of the video is wonderful and makes it fun to watch.
The video itself was apparently filed in a penthouse at Canoe Studios in lower Manhattan (in Chelsea) and the view you see outside the expansive windows is of the Hudson River and New Jersey, specifically, the skyscrapers in Jersey City along the riverfront, including the tallest building in New Jersey -- 30 Hudson Street or the Goldman Sachs Tower (42 stories tall).
You also get a bit of a view of Manhattan below.
I would never want to live that high up -- not even in a penthouse in Manhattan. 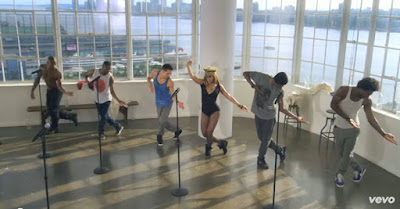 Another screenshot of Beyoncé's Love On Top video showing her and the dancers -- as well as the Hudson River towers of Hoboken, New Jersey beyond in the distance.
*******


The dancer in the first part of the video in the blue tank top sort of intrigues me a bit. He looks to be a young Hispanic man. There is never a clear view of his face. 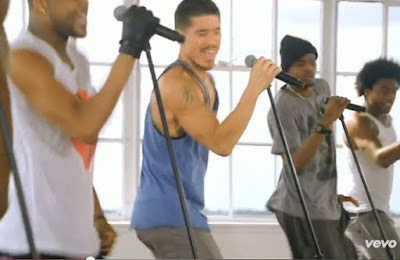 
And let's end with what is probably the ultimate 1980s power ballad song ...
"Total Eclipse of the Heart" by Bonnie Tyler from her Faster Than the Speed of Night album (1983)
If you were a teenage boy in the 1980s, you knew -- or rather, many years later, you realized you should have known -- that you were gay if you were wild about this song and its video with all those boarding school young men. 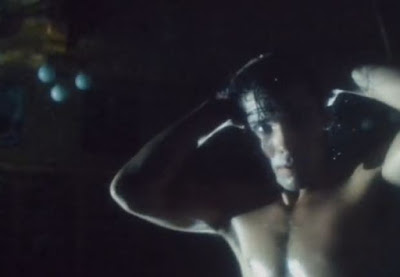 
By the way, I just discovered that until this entry, I never once mentioned Bonnie Tyler on this blog in the preceding 1,715 entries.
Imagine that. (Well, for that matter, I never mentioned Corey Hart prior to this entry, either.) 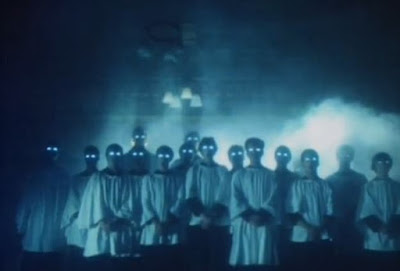 
Also, for some reason, I never pegged her as British and only found that out a few years ago. More specifically, she's Welsh.
Oh, and I'll have to post this song on the nearest Saturday before that 2017 eclipse I've mentioned a number of times on this blog and intend to see.
******* 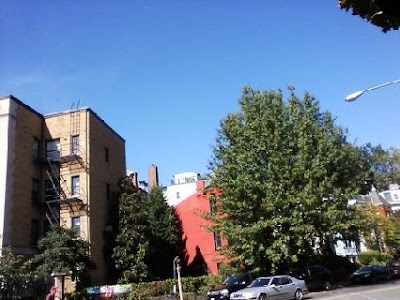 
As the quickest of updates, I had a very good gym workout (including the core part) and tonight did my laundry and made dinner. Last night, I went to No. 9, had a pleasant enough time (just standing by bartender Jose's well), and then I walked to Fox & Hounds, where I met up with Jamie and had a really nice time before heading home. 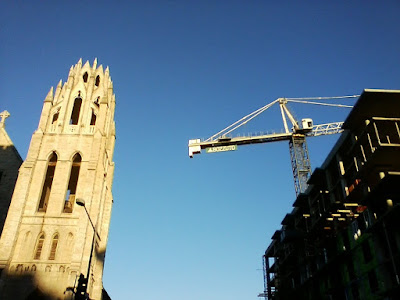 St. Augustine Catholic Church and a crane tower as seen from 15th and V Streets NW, Washington, D.C., 5:57PM October 10, 2015.
The crane tower is helping in the construction of a new condo building. Next to it will be another new building designed to be mixed-income that is to replace the now vacated "Portner Place" section 8 between U and V Streets. That building will be part upscale white millennials and part low income urban African Americans.
*******


For tomorrow, I'm supposed to have lunch with Quill. I also have Monday off for the Columbus day federal holiday. Right now, I'm headed to Larry's Lounge to meet Roger and perhaps Milan.