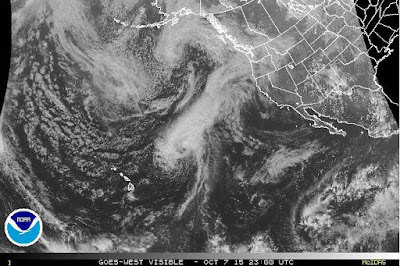 
OK, I don't want to have too-many weather-themed entries in a row, especially those that simply piggyback off the Capital Weather Gang postings, but given current weather events and all the good CWG entries, here is one more ...
For starters, there is a hurricane in the central Pacific with an awesome name that I'm not entirely sure how to pronounce: Hurricane Oho.
Is it "(long-o) ho" or "(short-o) ho"? Or is it some Native Hawaiian name whose okina and/or macron has been removed -- so that it would have a different pronunciation altogether including glottal stops (the okina). Here is a CWG entry on Hurricane Oho (link embedded):
Tropical storm may make rare appearance in North Pacific, transform, and then hammer southeast Alaska. 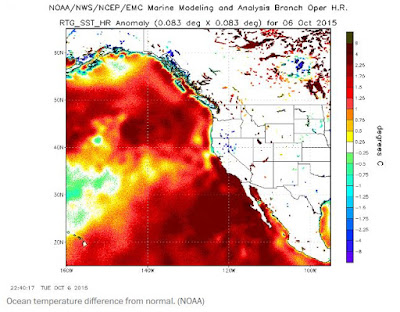 
The other interesting thing about Hurricane Oho is its track: It is literally making a beeline across the Pacific to a point off the southeast coast of Alaska -- transiting that "warm blob" of well-above-normal sea surface temperatures (SSTs) that is possibly associated with a large warm phase PDO (see image directly above).
Even with these elevated SSTs, the hurricane will still quickly transition to an extratropical cyclone as it reaches the coastline of British Columbia and affects even Southeast Alaska with wind and rain.


As the Central Pacific Hurricane Center noted in its 5PM HST discussion, on this track, Oho will actually soon be in the purview of the National Hurricane Center in Miami:
NOTE THAT THE CURRENT FORECAST TRACK HAS THE CENTER OF OHO POTENTIALLY CROSSING LONGITUDE 140W INTO THE AREA OF RESPONSIBILITY OF THE NATIONAL HURRICANE CENTER IN MIAMI FLORIDA BETWEEN 24 AND 36 HOURS FROM NOW. THERE IS QUITE A BIT OF UNCERTAINTY ABOUT WHETHER OR NOT OHO WILL BE A VIABLE TROPICAL SYSTEM WHEN...AND IF...THIS OCCURS. HOWEVER...SHOULD OHO ACTUALLY CROSS INTO THE NORTHEASTERN PACIFIC BASIN AS A TROPICAL CYCLONE...THIS WILL BE A RARE OCCURRENCE...AT LEAST IN THE SATELLITE ERA.


Oh, little Hurricane Oho ... We want to show you some love, too. (Yes, I paraphrasing a silly comment I wrote in this CWG entry. Actually, the other humorous one about the GFS versus the Euro got more "thumbs up" than any I've posted (9 as of now).)
Speaking of that topic, here is another CWG entry (link embedded):
What the European model 'win' over the American model in Joaquin means for weather forecasting.
The topic of why the ECWMF ("European" or "Euro") model is superior in a sustained way to the Global Forecast System (GFS) ("American") model is a topic of much interest both within the National Weather Service and NASA Goddard. Gary and I had a good conversation about it on Saturday while at Tony & Joe's in Georgetown. 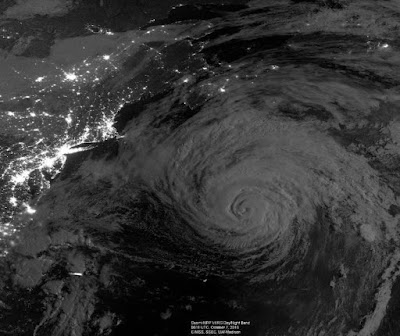 The above-linked CWG entry includes this absolutely stunning picture taken in the wee hours of Oct. 6, 2015 by the Suomi National Polar-orbiting Partnership (NPP) satellite with its Visible Infrared Imaging Radiometer Suite (VIIRS) instrument showing Hurricane Joaquin lurking (mostly harmlessly) far out over the Atlantic Ocean and the blazing constellation of lights of the U.S. East Coast megalopolis featuring the entire "Bos-Wash Corridor" in one glance.
*******


Finally, there is this entry showing just how amazingly efficient Hurricane Joaquin -- or, really, any major tropical cyclone -- is a removing a large warm SST anomaly, as Joaquin did with the one around the Bahamas (link embedded): Before and after: Hurricane Joaquin leaves behind astonishing cold wake.

Animated image showing SSTs (in Celsius) Of the Atlantic Ocean off the Southeastern U.S. and around the Bahamas, October 1st and October 6th, 2015.
*******


Calculating the Hydrogen Bomb-Scale Energy of a Hurricane ...
What of the energy released by a hurricane? As this very useful NOAA AOML webpage explains, if you figure out the energy released in a medium-sized hurricane using the latent heat of condensation, it works out to 600 Terawatts or 600 million Megawatts (6x10^14 Watts), which is significantly more than the world's total electricity generating capacity (5.55 million Megawatts in 2012). (Note that I think the AOML page is incorrect in what it says about the world's electrical generating capacity, although it might be assuming other things. I'm just using EIA's electricity generation capacity total.)
The same AOML site also calculates it with a kinetic energy approach involving wind speed in a mature hurricane, and that works out to 1.5 Terawatts or 1.5 million Megawatts (1.5x10^12 Watts). 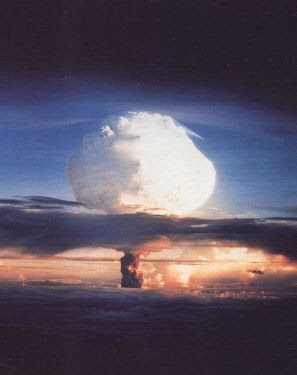 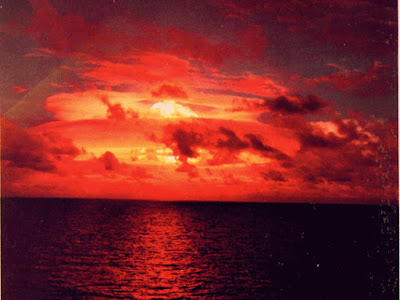 
And for the most stupendous thermonuclear device ever tested, the Tsar Bomba, with its 50 MT yield, it takes 347 seconds or just a bit under 6 minutes.
So you may say, Dear Children, that a typical hurricane is releasing a hydrogen bomb's worth of energy about every minute. That's kind of amazing. 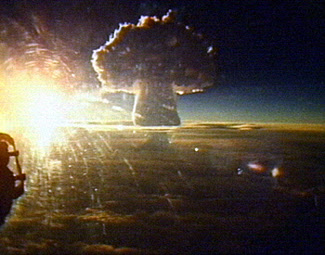 The mushroom cloud of the Tsar Bomba as seen from 100 miles away, October 30, 1961. The top of the cloud is 35 miles high. That means it easily punctured the stratosphere without the slightest tropopause "pause."
This is a fantastical image whose magnitude is hard to grasp.
*******


More on the Incredible South Carolina Floods: Aftermath and Photos
As one last weather and political item, it turns out that Sen. Lindsey Gay Graham (R - Gay) is, understandably, requesting federal taxpayer money to help the residents of his state affected by the incredible rainstorm over the weekend and resulting flooding. (This CWG entry states that an estimated 5.7 trillion gallons of rainwater fell on South Carolina and the figure rises to 11 trillion gallons if North Carolina's rainfall is included.) 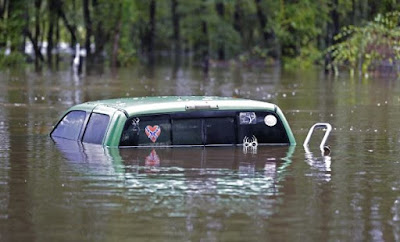 That's right.
Well, at least the heart-shaped Confederate flag decal sticker remained above water. That counts for something. Not sure what, though.
*******


The aid request is all well and good, and I've certainly no problem whatsoever with helping the folks in South Carolina who have lost so much. However, it has to be pointed out that Lindsey Graham not-so-gaily voted against the Hurricane Sandy relief package along with 36 other shitty Republican Senators, although now he pretends to "not remember" it.
Oh, Lindsey Graham, just gaily step out of that closet and admit your the essence of a hypocrite. But even if you don't, I still support helping your state's citizens with an aid package. 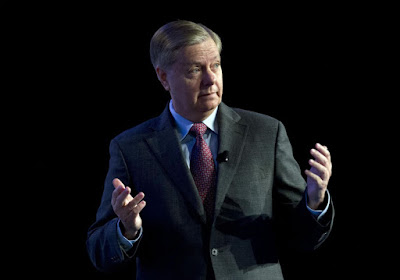 
This sounds to me like yet another massive fleecing operation in "The Long Con" whereby the fundie faithful are perma-fleeced by the Conservative Entertainment Complex's assorted huckster appendages. But let's stick with the weather topic right now.
Actually, I posted everything I want to post in this entry, so let me just end it except for a few more South Carolina flood images: 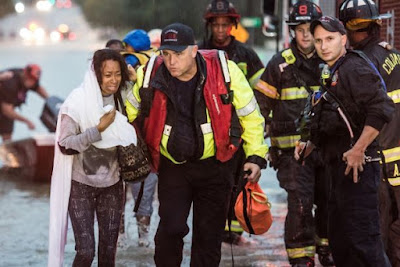 Charlene Stennis is rescued along with her son (not pictured) by emergency rescue personnel in the flood in Columbia, S.C., October 4, 2015.
******* 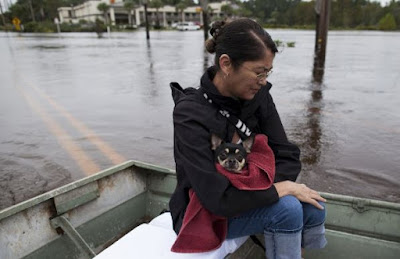 Miki Woodward holds onto her small dog while waiting in a little boat on a flooded street to be brought to safety in Conway, S.C., October 6, 2015.
******* 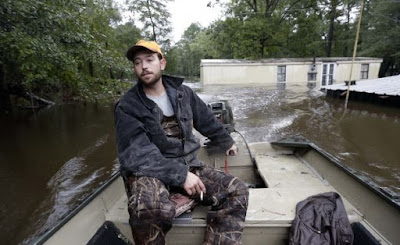 Hunter Baker guides a motorboat through his badly flooded neighborhood along the overflowing Black Creek in Florence, S.C., October 5, 2015.
******* 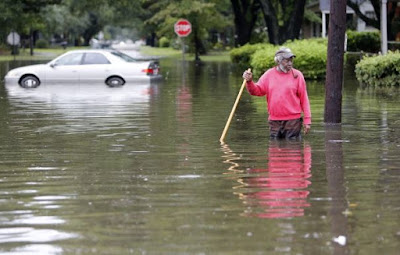 David Linnen stands on a flooded street as he tries to clear drains of debris outside his apartment complex in Georgetown, S.C., October 4, 2015.
******* 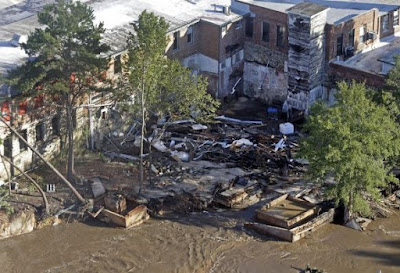 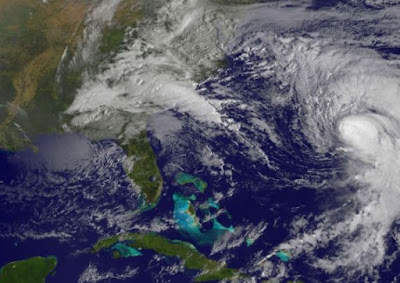 Satellite image showing Hurricane Joaquin and the weather system over South Carolina -- originating just offshore but connected indirectly to the tropical cyclone -- on October 4, 2015.
This image suggests at the complex interaction of Hurricane Joaquin and the incredible thunderstorm training event that dropped 1 to 2 feet of rain across such a large part of South Carolina over a 4-day period. For more on that incredible event, see here.
*******


As the briefest of update, I had a busy day at work and a good three-part gym workout earlier tonight. But I'm still apparently serving my life sentence in Washington, D.C. I'll try to post another (non-weather-related) update tomorrow night but Friday evening is more likely.
--Regulus
Posted by Regulus at 2:39 AM