Friday Night Light Blog Fare: Weather Talk, Brief Update, and Link to a Great John Amos Interview -OR- If It's Not Your Fault, Then Who's Is It? 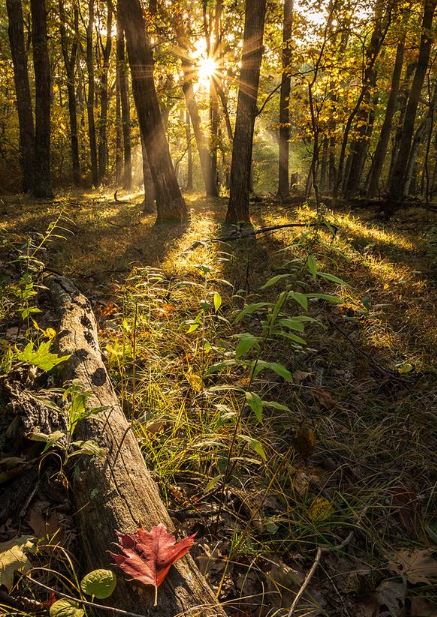 Sunrise in Shenandoah National Park on October 12, 2015 in a photo by John Ernst and reposted from his Twitter site to this CWG entry.
I'm not going to link to the original Twitter pages. You can find it in the above-linked entry.
*******


It is a tranquil, cool evening with no "weather" of note forthcoming for at least the next week and probably more like 10 days to two weeks. We really are in a weather-less October, Hurricane Joaquin's indirect effects notwithstanding.
Tonight's lows here in D.C. are forecasted to get down to about 47F but the really cold nights -- for this time of year -- are forecasted for Saturday and Sunday mornings with lows around 38F even at frickin' KDCA and near-to-below freezing in the suburbs and exurbs including KIAD. Waterfalls (cascades) in Blackwater Falls State Park in Davis, West Virginia in a photo taken Oct. 12, 2015 by Jen Johnson and reposted from her Twitter page to the same CWG entry.
*******


The CWG had this entry about it. And this one. I'm not going to go into a lot of detail. Just read those if you're so inclined. 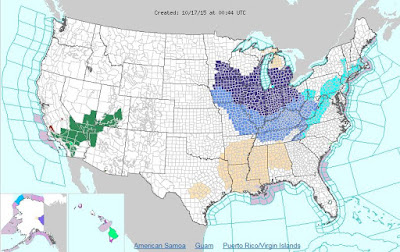 NWS advisories for the U.S. as of 0044UTC (8:44PM EDT) Oct. 17 (16th), 2015.
This does not include the caption. The dark greens in the Southwestern U.S. are flash flood watches (discussed below). All the various indigoes and blues are various freeze warnings, freeze watches, and frost advisories. For the north coast of Alaska along the Chukchi Sea and Arctic Ocean, that's a heavy freezing spray warning.
*******


As the above map shows, there are flash flood watches in effect in much of Southern California, southern Nevada, and parts of Arizona. It is due to a cut-off low that rolled in off the Pacific.

This CWG entry discusses it including the thunderstorms and mudslides that occurred in parts of Southern California the past few days, although it doesn't look like the weather stations in the immediate L.A. area (KLAX, KCQT, KLGB, KBUR, or KSMO got anything the past three days). 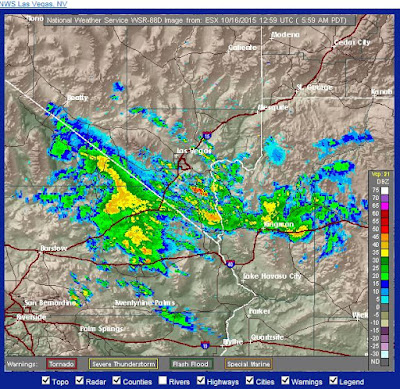 Las Vegas NWS radar (ESX) in enhanced composite reflectivity mode at 5:59AM PDTD October 16, 2015.
This shows steady rain over Death Valley early this morning. As near as I can tell, the weather station near Stovepipe Wells has had 0.38" of rainfall in the past three days, which is kind of phenomenal.
*******


There were mudslides triggered by t-storms in parts of L.A. County and near San Luis Obispo. There are flash flood warnings just north of Santa Barbara tonight. KSBA itself has only had 0.07" rain in the past three days. Extensive flash flood watches are out in the mountains and on the desert. 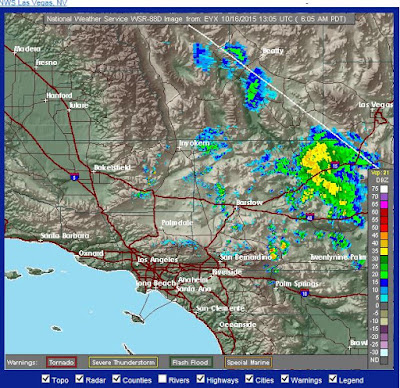 
As is every meteorological event under the Sun, the cut-off low was immediately attributed by the media to the ongoing major "El Niño" (warm ENOS) event even though the ongoing warm phase PDO and/or the negative AO (which is more likely to affect the polar jet from which the low cut off) seems a more likely culprit this time of year (not the winter season).
CPC came out with its winter weather seasonal outlook and it was all-El Nino-and-nothing-else based, i.e., nothing about these other oscillatory phenomena including the very significant Arctic Oscillation (AO).
Here is the YouTube video put together:
It's kind of annoying to watch in its way.
*******


OK, it is Friday night and still early. I would like to get dinner, indeed, I need to as I have no food in the apartment. I'm just not sure where to go. I might go to Old Ebbitt Grill and take advantage of the Sept / Oct. lobster special. Or I might go back to Maxime's, even though Georgetown is a bit of a walk. Or I could go to Floriana (I never actually eat there -- just drink at the bar).
My week was a very busy one -- and spent recovering from last Sunday night's excesses (remember Monday was a holiday). I also was flat broke for the past three days but got paid today. 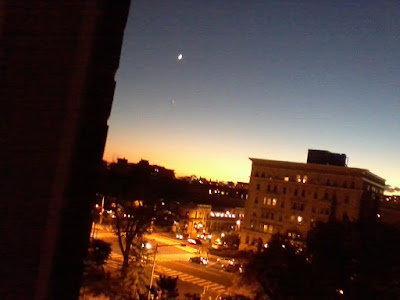 I took this picture from my apt. window at 7:02PM tonight overlooking 16th and U Streets and New Hampshire Ave, Washington, D.C., October 16, 2015 at dusk.
The picture came out like crap, like all my flip-open cellphone ones do. That is the crescent Moon in the sky that is visible.


I made it to the gym twice (Tuesday and Thursday). For this weekend, I intend to go to the gym tomorrow. I don't have any particular plans, which is just as well.
And with that, I'm going to sign off ... Except for this clip from the movie Good Will Hunting that I had intended to post in another entry that I never composed.


It really is awful about Robin Williams. What an amazing, amazingly talented, and good man.
"It's Not Your Fault ..."
I still want to post all my Monday walk pictures along the Mt. Vernon trail. I would prefer to do that in a dedicated entry rather than randomly and topically unrelated.
Oh, yes, read this wonderful interview with actor John Amos (link embedded): John Amos on Mary Tyler Moore, Racism on Set, and Playing the First Black Family Man.
OK, that really is all for now.