Yes, We Really Are Sick and Tired of Hearing About Those Damn Emails: The Tragedy Then and Farce Now of the GOP and Beltway Media's Clinton Fake Scandal Perpetual Motion Machine 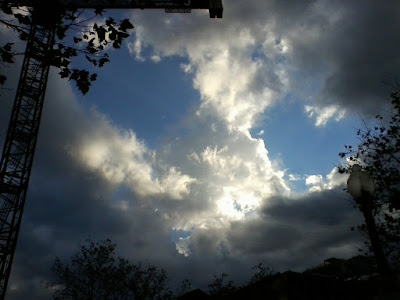 
Late Tuesday night.
From earlier ...
It's Tuesday evening and I'm home from work but in front of the computer waiting on edits to a press release to arrive. If the file hasn't arrived by 7PM, I'm going to head to the gym anyway and sort it out later. A co-worker friend of mine (in our Colorado office) and I collaborate sometimes on these after-hours press release productions when necessary.
I'm going to try to go to the gym but, honestly, I am not feeling well. I have a bit of a fever and feel very tired. I also don't know if I can jog tonight -- not my usual 6.6 miles -- if only because my fascist planter plantar fasciitis seems to have flared back up.
Yesterday, I walked between 7 and 8 miles yesterday from National Airport all the way to Rosslyn (on the Mt. Vernon bike trail) and then over the Key Bridge into Georgetown and back to Dupont Circle. I have a number of pictures from that walk to post (but not in this entry).
Also, I am sort of recovering from a holiday weekend (esp. Sunday night) of excess. Until at least Friday, it is total sobriety and severe austerity (enforced by the fact that I'm virtually out of money until I get paid).
A cluster of rain showers and possibly t-storms actually formed at dusk -- primarily just south of D.C. -- ahead of an otherwise dry, gusty frontal passage. Much cooler weather is progged for the days ahead but no real rainfall. 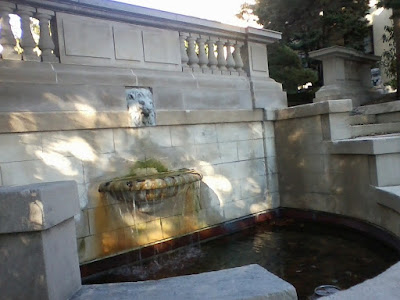 
... Back to now ...
I made it to the gym and had a mediocre workout, although I got in my jog (6 miles/a bit over 58 minutes plus 5 minute cool down).
I didn't watch the CNN-hosted Democratic Presidential debate that happened tonight but it was on one of the TVs (muted with close-captioning) at the gym and on some of the TV monitors on the cardio equipment. I noted that the event technically began at 830PM but the first question wasn't until 850PM. 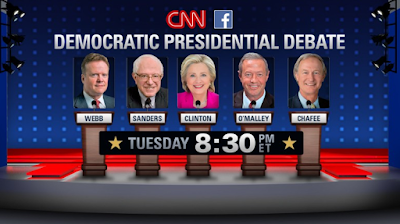 Everything else in that time was CNN self-aggrandizing filler (I can't abide Anderson Cooper and Don Lemon is an incredible village idiot) and endless commercials for Toyota Tundra SUVs, men with erectile dysfunction and women with fibromyalgia, movies with Matt Damon, and sundry other American-style "bread and circuses" vendible bullshit.
HRC did not get her first question until approx. 8:57PM.
It appears to have been a lively debate with actual policy issues discussed -- as opposed to the GOP freak show counterpart with its carnival barkers, hucksters, bloviating entertainers, and self-destructive radicals who have no clue how and/or desire to achieve any actual "policy outcomes," and instead collectively form a sort of insular cult. Paul Krugman said it best when he said the GOP is a "post-policy enterprise" these days.
I suppose the highlight of the debate was when Bernie Sanders actually came to Hillary's defense by declaring: "The American people are sick and tired of hearing about your damn emails." Story here. 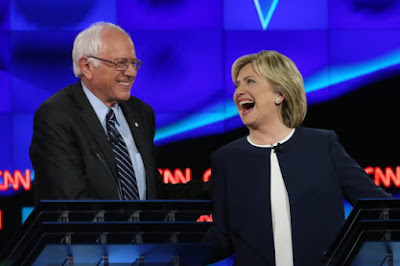 She laughed and they shook hands (they were standing next to each other on the stage along with three other Democratic presidential candidates). No, Joe Biden wasn't there. 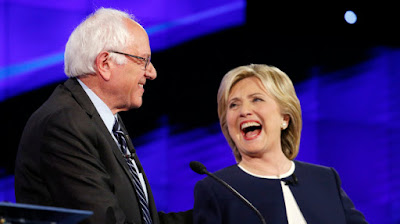 Jonathan Chait thinks she did very well, even declaring the Hillary Clinton panic may have finally ended.
Here is a clip of what Sen. Sanders actually said:
This won't fly with the Beltway media class, of course, who have lived and breathed bullshit Clinton pseudo-scandals as far back as 1992.
The news that the GOP Benghazi witch hunt through that "Select Committee" -- itself expressly designed to take down Hillary politically (or so said the hapless Kevin McCarthy in an inadvertently candid way to Fox News in what probably cost him any chance at the Speakership) -- had switched to the unrelated email matter (selectively leaking things to credulous and/or sympathetic reporters) has been big news the past few days. It was the New York Times that ignited the email scandal story (just as it originally did the Whitewater bullshit a generation ago) but it was also the NYT that broke the story of what the Select Committee on Benghazi was really up too.
A semi-permanent scandal machine targeting the Clintons that morphs from one topic to a completely different one, of course, is EXACTLY what Ken Starr's "independent counsel" travesty did, and while Fred Hiatt's WaHoPo stable of op-ed and editorial writers -- in particular, Benji Wittes back in his Monica's Dress Phase.
In this way, it's back to the future. However, unlike then, there is a large and effect progressive media infrastructure counterweight that simply did not exist in the late 1990s. All we had then was the stupid evening news, a bit of CNN, and, in the D.C. Bubble, a hope and a prayer that the Great and Mysterious M.J. McAteer would allow an opposing letter to appear in the then-ubiquitous print edition of the WaHoPo. (There really was no online version back then.)
Another difference is that the rightwing fundamentalist Ken Star -- darling of the Graham Post Family -- had a much more supercilious apparatus in place. There were no taxpayer-funded "Wine Wednesdays" and Glock gun-buying clubs.
I guess it really is like Marx's adage about tragedy followed by farce.
At least we can hope so. Having said all this, I'm under no illusion that the whore-media will stop doing what it does best -- get itself into a weirdly aroused state over fake Clinton scandals -- and there is zero chance the GOP in its present form and the "conservative entertainment complex" of hucksters, charlatans, and the like that runs it will stop fanning them.
Anyway, I'm going to try to post the entry I intended tonight. If not (and I rather tired), I'll try again tomorrow. (Remember, I too broke to go out after work until Friday, so it's just gym and blogging.)
--Regulus
Posted by Regulus at 11:59 PM