The Storm Before the Storm? Deluge Drops 1 to 6 Inches of Rain Across Region, Ending Drought; Attention Turns to Tropical Storm Joaquin (Not Quite Ready to Hit Weather Panic Button Yet) 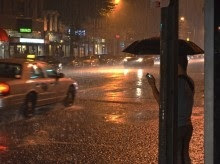 An umbrella-carrying, texting young person in a deluge on 14th Street NW near Logan Circle, Washington, D.C., in an undated photo, although likely from earlier this summer.
This image is featured as the thumbnail to this CWG entry. I think it was originally in the entry as a larger photo but it has since vanished -- replaced by a looped radar image. Alternatively, it was just the thumbnail image to it from the beginning.
I'm posting it because it captures the weather feel of earlier tonight.
*******


OK, I am managing to sneak in yet another blog entry despite my severely limited time constraint owing to the DOE workshop that I attended today (Tuesday) and need to attend again tomorrow (Wednesday) with an 815AM-ish arrival time (meaning I have to get up at 6AM because of how long it takes me to function in the morning). 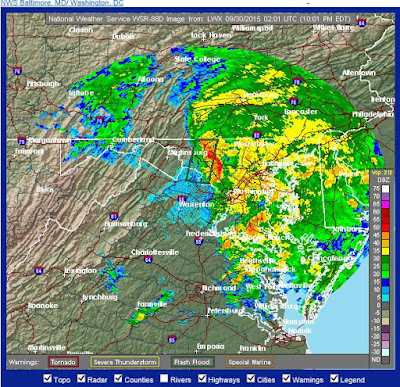 
This entry contains a discussion of t he weather and what is suddenly a wet and potentially very stormy pattern with three events -- one current and two possible over the weekend.
First, tonight's D.C. area deluge that has dropped 1 to 6+ inches of rain across the region -- effectively ending the prolonged dry spell / developing drought -- thanks to a tropical moisture feed along a slowly sagging cold frontal boundary with two upper level lows -- one riding the southern stream and other over the Great Lakes -- and multiple mesoscale surface lows across the mid-Atlantic. 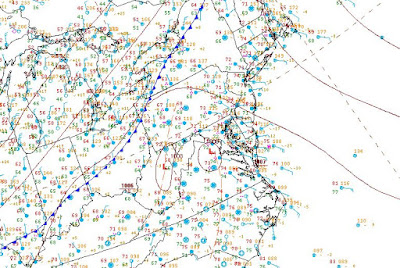 
It was a tropical-type rain with warm, humid conditions. (That is forecasted to change by later in the week to much cooler.)
Rainfall totals have reached 3 to 6+ inches across the Blue Ridge and Potomac Highlands. In the Baltimore/Washington corridor, totals are in the 1 to 3 inch range. Through 11PM, KDCA itself has had 1.65" while KIAD has had 1.57". KBWI had picked up a hefty 2.56" (bringing its yearly total to within striking distance of 40" and not far from its current 30-year annual average (41.88"). KDMH picked up 1.92". 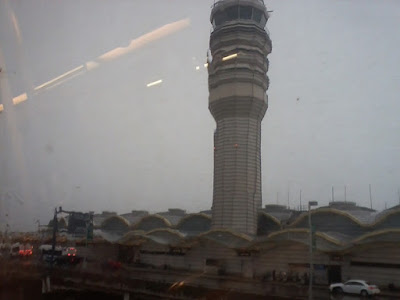 The control tower and terminal B of Reagan Washington National Airport as seen from the Metrorail earlier this rainy evening, 5:33PM Sept. 29, 2015.
I was heading back into D.C.


The second weather feature is tied strongly with the third one: A deepening negatively tilted trough with coastal low -- or multiple low pressures -- along the Eastern Seaboard and Tropical Storm Joaquin, possibly intensifying into a hurricane with a POSSIBLE (though not probable) weekend mid-Atlantic landfall. 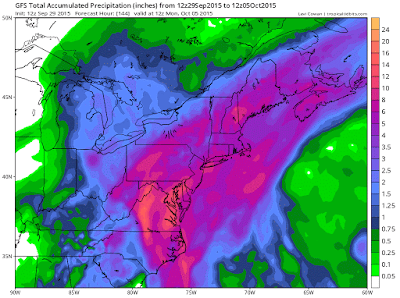 12Z 29Sept2015 GFS showing total precipitation through hour 144 / valid 12Z Oct. 5, 2015 for the northeastern U.S.
This is from the Tropical Tidbits Numerical Model Prediction page with the much better graphics.
******* 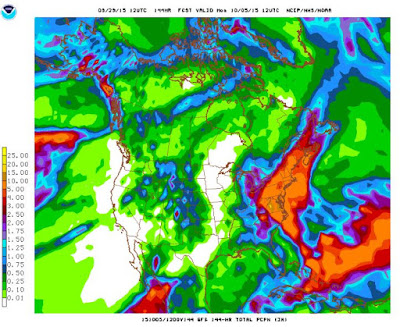 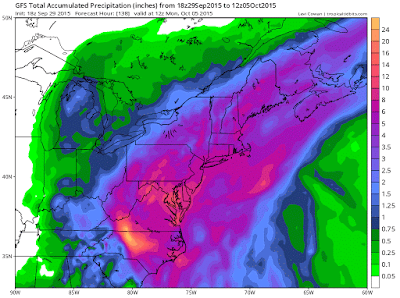 
This is potentially a major story. Of note, the 12Z and 18Z operational GFS take an outright category 1 hurricane into the D.C. area -- the 18Z featuring a 976-mb tropical cyclone directly over the lower-to-middle Chesapeake Bay by Sunday morning: 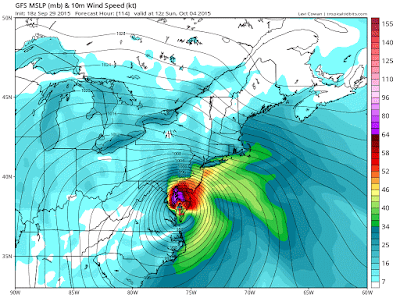 We don't need that.


The HWRF and U.K. Met Office models -- including the 12Z and 18Z HWRF -- do the same thing but other models including the 12Z ECWMF do not (due to differences in the greater strength of a ridge to the north of the storm). The just-updated 11PM EDT official NHC track is still well offshore, but the track has been shifted to the west.
The 0Z 30Sept2015 GFS is not yet out -- and that could easily shift the storm again west or east given how uncertain is the synoptic pattern forecast.
Updated 12:20AM 9/30/2015: The 0Z 30Sept2015 GFS is out and it shows more or less the same thing: 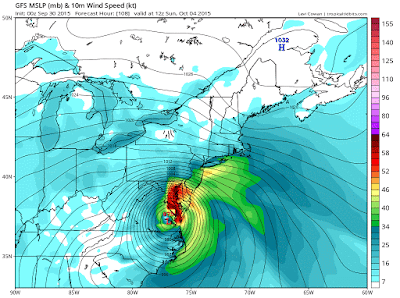 0Z GFS 30Sept2015 showing mean sea level pressure (MSLP) (in mb) and 10-m winds (in knots) valid at 12Z (8AM EDT) Oct. 4, 2015 for the northeastern U.S.
This brings a 975-mb low directly over the Norfolk - Newport News area and has a screaming 55-MPH sustained wind (and gusty) from the east with a deluge of rain for the immediate D.C. area.
Even though this is practically a Hurricane Sandy track for the D.C. area (rather than New York City and the Jersey shore), I'm still going to wait a day or two before hitting the weather panic button. Hour 108 is 4-1/2 days away.
*******


The Sterling LWX discussion from earlier this afternoon is worth quoting:
.LONG TERM /FRIDAY THROUGH TUESDAY/...
A FRAGILE AND POTENTIALLY HIGH IMPACT FORECAST IS AT PLAY FOR THE UPCOMING WEEKEND. MODEL GUIDANCE IS HAVING TROUBLE CONSISTENTLY RESOLVING THE INTERACTION BETWEEN TROPICAL CYCLONE JOAQUIN AND A STRONG TROUGH OF NON-TROPICAL LOW PRESSURE APPROACHING THE EASTERN SEABOARD. REGARDLESS OF THE EVENTUAL EVOLUTION OF JOAQUIN...THE APPROACHING UPPER-LEVEL TROUGH WILL AMPLIFY AND TAKE ON A SHARP NEGATIVE TILT THANKS TO BLOCKING HIGH PRESSURE TO THE NORTH AND EAST...RESULTING IN CYCLOGENESIS AND A SOAKING RAIN THIS WEEKEND. THE TIMING IS A BIT UNCERTAIN IN TERMS OF THE HEAVIEST RAIN...BUT WITH THE BLOCKING HIGH PRESSURE ARCING FROM SOUTHEASTERN CANADA INTO THE NORTHWESTERN ATLANTIC...THE WHOLE PATTERN WILL BE SLOW TO PROGRESS. THEREFORE...A PROLONGED PERIOD OF RAIN IS POSSIBLE...AND SOME COULD BE QUITE HEAVY GIVEN THE TROPICAL MOISTURE CONNECTION /EVEN OUTSIDE OF JOAQUIN/.
IT IS PARTICULARLY PRUDENT TO FOLLOW THE LATEST FORECAST UPDATES IN THE COMING DAYS REGARDING BOTH THE EVOLUTION OF A POTENTIAL HEAVY RAINFALL EVENT WITH THE APPROACHING NON-TROPICAL TROUGH/LOW PRESSURE AND THE FUTURE FATE OF JOAQUIN. 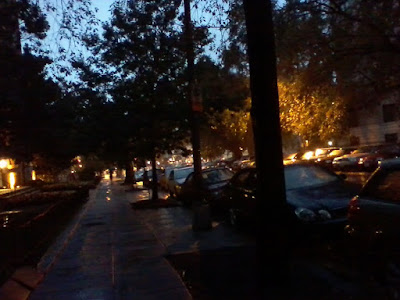 
At this point, a tremendous amount of rainfall is forecasted over the next 7 days: 
Here is a CWG entry from earlier today about this (link embedded): Tropical Storm Joaquin could cause major East Coast rainfall this weekend.
I'll end with a text Gary sent me a short while ago: "The outcomes for this event I think range from bad (windy, very heavy rain) to awful (direct strike down on the northern neck [of Virginia]."
OK, that's really all I can write right now on the weather situation.
As the briefest of updates ... I got to King Street Metro by 810AM this morning (!) and made it to the adjacent Hilton for day 1 of the DOE AMO "Process Intensification" workshop where I was exposed to a vast new topic that I cannot possibly begin to go into now, even as I assisted in one of the breakout sessions.
The rain started by the time I left around 515PM. I got home and soon went to the gym (second night in a row).
I need to repeat all of this tomorrow, but I won't be going to the gym tomorrow night but probably stop at No. 9. However, I might have a company press release to finalize tomorrow night as well. (Remember I do both client and company work.)
I'm leaving the computer home tomorrow. If the weather situation warrants, I will post an update tomorrow night.
--Regulus
Posted by Regulus at 11:55 PM