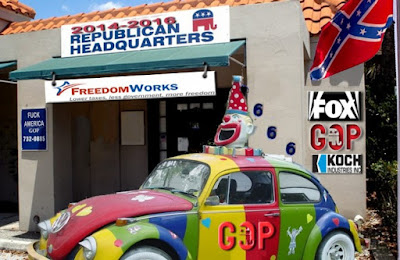 Ha ha
Below are two must-read New York Times pieces about Wednesday night's CNN-hosted, 3-hour-long GOP presidential candidate clown-car "debate": One is an editorial and the other is Paul Krugman's Friday op-ed. Jonathan Chait also has had some good takes on it as well: here and here.
In order just to get this entry posted in a timely fashion, I am only posting two images (the above one and another below), otherwise, it's just the text.
Crazy Talk at the Republican Debate
By the New York Times Editorial Board, September 17, 2015
Source here.


Eleven presidential candidates had three prime-time hours on the national stage on Wednesday to tell the American people why they should lead the country.
Nobody forced them to be there. They were there freely, armed with the best arguments they and their policy advisers had come up with, to make their cases as seasoned politicians, business leaders and medical professionals -- the Republican Party's "A-Team," as one of them, Mike Huckabee, said at the outset.
And that, America, is frightening. Peel back the boasting and insults, the lies and exaggerations common to any presidential campaign. What remains is a collection of assertions so untrue, so bizarre, that they form a vision as surreal as the Ronald Reagan jet looming behind the candidates' lecterns.
It felt at times as if the speakers were no longer living in a fact-based world where actions have consequences, programs take money and money has to come from somewhere. Where basic laws -- like physics and the Constitution -- constrain wishes. Where Congress and the public, allies and enemies, markets and militaries don’t just do what you want them to, just because you say they will.
Start with immigration, and the idea that any president could or should engineer the mass expulsion of 11 million unauthorized immigrants. Not one candidate said that a 21st-century trail of tears, deploying railroad cars, federal troops and police dogs on a continental scale, cannot happen and would be morally obscene. Ben Carson said, "If anybody knows how to do that, that I would be willing to listen." They accepted the need to "control our borders" with a 2,000-mile fence. Even Senator Marco Rubio of Florida, once an immigration moderate, endorsed the fence. Mr. Carson actually suggested two fences, for double security, with a road in between. Do these people have to be sent to the Rio Grande Valley to see how ludicrous a border fence -- over mountains, vast deserts, remote valleys and private property -- would be? And it won't solve the problem they are railing against, which doesn't exist anyway. Illegal immigration has fallen essentially to zero.
On foreign affairs, there was a lot of talk about not talking with bad people. Senator Ted Cruz of Texas said his first act would be to tear up the Iran deal, throwing the nuclear race back to the ayatollahs and rupturing global alliances — but making a point! Carly Fiorina said: "What I would do, immediately, is begin rebuilding the Sixth Fleet, I would begin rebuilding the missile defense program in Poland, I would conduct regular, aggressive military exercises in the Baltic States. I'd probably send a few thousand more troops into Germany. Vladimir Putin would get the message."
We get the message, and it's scary.
Jeb Bush spun a particularly repellent fantasy. Speaking reverently of his brother the president, he said, "He kept us safe," and invoked the carnage of 9/11. Wait, what? Did he mean George W. Bush, who was warned about the threat that Al Qaeda would attack? Who then invaded a non sequitur country, Iraq, over a nonexistent threat?
When the A-Team got around to science and health, many of them promised to help Americans by killing the program that gives millions of them medical insurance. One candidate said he felt sure that vaccines had caused an autism "epidemic." The two doctors on the dais did not seriously challenge that persistent, dangerous myth.
Let loose by the CNN moderators, the candidates spun their visions freely. Despite an abundance of serious issues to talk about, nobody offered solutions to problems like child poverty, police and gun violence, racial segregation, educational gaps, competition in a global economy and crumbling infrastructure. On looming disasters (the changing climate) and more immediate ones (a possible government shutdown over, of all things, Planned Parenthood), the debate offered no reassurance that grown-ups were at the table, or even in the neighborhood.
But we did hear an idea to put Mother Teresa -- Mother Teresa, a penniless nun -- on our money. Think about that.
"We were discussing disease, we were discussing all sorts of things tonight, many of which will just be words. It will just pass on," one candidate said, wrapping up. "I don’t want to say politicians, all talk, no action. But a lot of what we talked about is words and it will be forgotten very quickly.”
Which was the smartest thing Donald Trump has said all year, and an outcome America should dearly hope for.
A version of this editorial appears in print on September 18, 2015, on page A28 of the New York edition with the headline: Crazy Talk. Today's Paper.|
******* 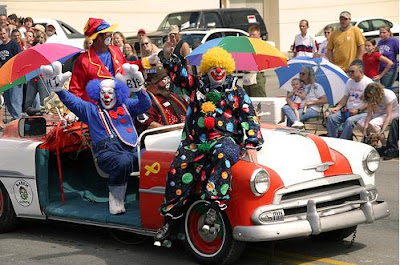 
I've been going over what was said at Wednesday's Republican debate, and I'm terrified. You should be, too. After all, given the vagaries of elections, there's a pretty good chance that one of these people will end up in the White House.
Why is that scary? I would argue that all of the G.O.P. candidates are calling for policies that would be deeply destructive at home, abroad, or both. But even if you like the broad thrust of modern Republican policies, it should worry you that the men and woman on that stage are clearly living in a world of fantasies and fictions. And some seem willing to advance their ambitions with outright lies.
Let’s start at the shallow end, with the fantasy economics of the establishment candidates.
You're probably tired of hearing this, but modern G.O.P. economic discourse is completely dominated by an economic doctrine -- the sovereign importance of low taxes on the rich -- that has failed completely and utterly in practice over the past generation.
Think about it. Bill Clinton's tax hike was followed by a huge economic boom, the George W. Bush tax cuts by a weak recovery that ended in financial collapse. The tax increase of 2013 and the coming of Obamacare in 2014 were associated with the best job growth since the 1990s. Jerry Brown's tax-raising, environmentally conscious California is growing fast; Sam Brownback's tax- and spending-slashing Kansas isn't.
Yet the hold of this failed dogma on Republican politics is stronger than ever, with no skeptics allowed. On Wednesday Jeb Bush claimed, once again, that his voodoo economics would double America's growth rate, while Marco Rubio insisted that a tax on carbon emissions would "destroy the economy."
The only candidate talking sense about economics was, yes, Donald Trump, who declared that "we've had a graduated tax system for many years, so it's not a socialistic thing."
If the discussion of economics was alarming, the discussion of foreign policy was practically demented. Almost all the candidates seem to believe that American military strength can shock-and-awe other countries into doing what we want without any need for negotiations, and that we shouldn’t even talk with foreign leaders we don't like. No dinners for Xi Jinping! And, of course, no deal with Iran, because resorting to force in Iraq went so well.
Indeed, the only candidate who seemed remotely sensible on national security issues was Rand Paul, which is almost as disturbing as the spectacle of Mr. Trump being the only voice of economic reason.
The real revelation on Wednesday, however, was the way some of the candidates went beyond expounding bad analysis and peddling bad history to making outright false assertions, and probably doing so knowingly, which turns those false assertions into what are technically known as "lies."
For example, Chris Christie asserted, as he did in the first G.O.P. debate, that he was named U.S. attorney the day before 9/11. It's still not true: His selection for the position wasn't even announced until December.
Mr. Christie's mendacity pales, however, in comparison to that of Carly Fiorina, who was widely hailed as the "winner" of the debate.
Some of Mrs. Fiorina's fibs involved repeating thoroughly debunked claims about her business record. No, she didn’t preside over huge revenue growth. She made Hewlett-Packard bigger by acquiring other companies, mainly Compaq, and that acquisition was a financial disaster. Oh, and if her life is a story of going from "secretary to C.E.O.," mine is one of going from mailman to columnist and economist. Sorry, working menial jobs while you’re in school doesn't make your life a Horatio Alger story.
But the truly awesome moment came when she asserted that the videos being used to attack Planned Parenthood show "a fully formed fetus on the table, its heart beating, its legs kicking while someone says we have to keep it alive to harvest its brain." No, they don't. Anti-abortion activists have claimed that such things happen, but have produced no evidence, just assertions mingled with stock footage of fetuses.
So is Mrs. Fiorina so deep inside the bubble that she can’t tell the difference between facts and agitprop? Or is she deliberately spreading a lie? And most important, does it matter?
I began writing for The Times during the 2000 election campaign, and what I remember above all from that campaign is the way the conventions of "evenhanded" reporting allowed then-candidate George W. Bush to make clearly false assertions -- about his tax cuts, about Social Security -- without paying any price. As I wrote at the time, if Mr. Bush said the earth was flat, we’d see headlines along the lines of "Shape of the Planet: Both Sides Have a Point."
Now we have presidential candidates who make Mr. Bush look like Abe Lincoln. But who will tell the people?
*******


Good stuff. It's just depressing, though, that we live in such a screwed up time (but when aren't "the times" screwed up?) in which one of our two main U.S. political parties basically resembles a cult that features corporate oligarchs ("the donor class"); bug-eyed fearful fundamentalists, Tea Party crazies, and a morally obscene, thoroughly "operationally" toxic libertarian bullshit that itself is just an inverted Marxism courtesy that vile woman, Ayn Rand. 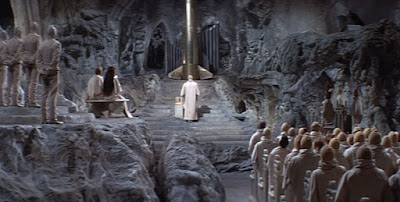 Republican National Convention, 2016.
In short, today's GOP is basically an inverted Marxist movement married to a deeply perverted, de-Christianized, erstwhile Protestantism whose top worships money and power while those at the bottom are deluded on tenets of fear, loathing, and strange fantasies untethered to the actual world around them.
That being the case, the Empire is in trouble.