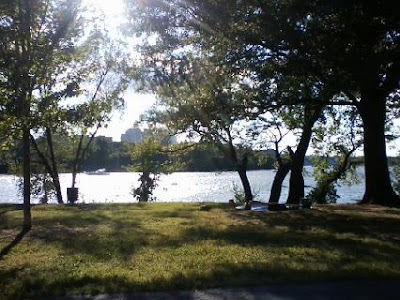 The shimmering Potomac River as seen from near the Watergate (looking toward Theodore Roosevelt Island), Washington, D.C., 4:53PM Sept. 13, 2015.
Despite the drought-i-ness, the weather Saturday night and Sunday was lovely with a gusty, northwesterly breeze and cool temps. and some early leaf fall (primarily because it's so dry, not because the leaves are starting their autumn turnover yet).
*******


This is a quick morning entry whose purpose is two-fold: (1) to replace the previous one as the current lead entry (the topic is important but I don't want it to be the top posting!); and (2) to relate my planned blogging schedule this week.
On the second point, I intend to try to catch up on my entries because, as I've noted recently, I am way behind on what I want to post. Thus, barring some major or spectacular event, I intend to compose and post the backlog of entries I have starting with an overview of my Saturday night and Sunday. Those two periods were, on balance, quite good and made up for how lousy was Friday night.
Doings on Saturday night included going to a concert venue with Wendy in Capitol Hill to see the group Dengue Fever and also stopped beforehand at a wonderful little English pub called the Queen Vic and then, thereafter, at Old Ebbitt Grill for a late dinner at the Old Bar. 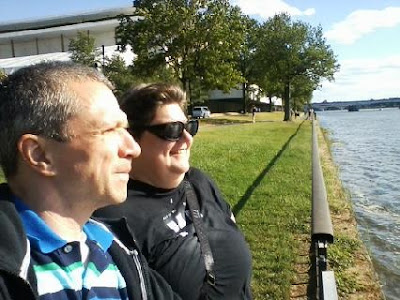 
Yesterday (Sunday), I took a nice walk with Quill down to the Potomac River and over to Washington Harbour and then last night, stopping at Floriana (Dito's greeting / comic insult of me was hilarious) and Fox & Hounds with Jamie.
Other entries I intend to post this week include an overview of last weekend's visit to see my mom and the dinner with Jerry and Lola and, yes, my Jersey shore vacation pics from now 2+ weeks ago.
I will make every effort not to be distracted by political commentary or world events. As for the weather, in a word: ZERO. Nothing but wall-to-wall sunshine and dryness for at least another week, so I won't be writing about that crap.
Gym-wise, I plan to go tonight and Wednesday night. As for tonight -- assuming no lingering water issues in the building (we are about to have a hot water shutoff for the day starting at 10AM) -- I (desperately) need to do my laundry.
OK, that's all for now. 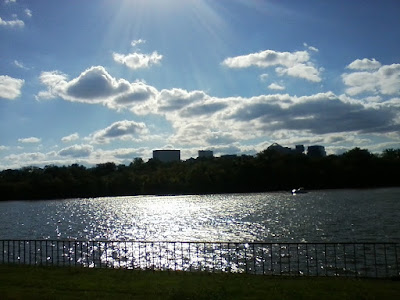 Another view of the Potomac River sparkling in sunlight with Theodore Roosevelt Island on the Virginia side visible, not to mention and the skyscrapers of Rosslyn poking up behind it, as seen from near the Watergate Complex, Washington, D.C., 4:26PM September 13, 2015.
*******


Well, I accomplished everything I wanted to today including post-office good gym workout and doing my laundry, but it is just after 1AM now, and I simply cannot realistically start a blog entry at this hour, both because as I am tired and I need to be in work tomorrow at 930AM for a meeting. I'll try to post a new entry tomorrow night, although it is a non-gym night with a planned happy hour at Commissary (a group event with Andrea & Co.) and probably a stop at next door No. 9 as well, so the next entry might not be until late Wednesday. However, I intend to stick with my planned catch up of backlogged entries rather than new / distraction-driven content.
End of Update and of Entry.