Jukebox Saturday Night Entry for Sept. 26th, 2015: Tina, The Trammps, and Genesis Edition -OR- What Does Love Got To Do With It??

"What's Love Got to Do with It" by the great Tina Turner from her Private Dancer album (1984)
I've mentioned this before: Tina Turner and I have the same birthday -- Nov. 26th -- but she is precisely 30 years older than me.
The opening of the great music video to the song features the lower Manhattan skyline of 1984 and so the Twin Towers are quite prominent. 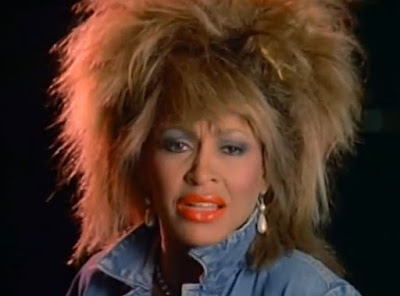 Tina! That's quite a hair do.
Relevant GG quote:
Blanche: "I am a natural blonde."
Dorothy: "Yep. You and Tina Turner."


And let's end with something really energetic ...
"Invisible Touch" from the album of same name by Genesis (1986)
It's a nice song although there really is no "video" to it -- just Phil Collins and the group fooling around a soundstage set.
Updated Jan. 30, 2016: I had to replace the YouTube video because the previous one had been taken down.
OK, that's all for now. As I mentioned, I might not post another update until Monday night, and blogging might be limited until Wednesday night.
--Regulus
Posted by Regulus at 9:50 PM