Back from the Jersey Shore: An Interim Update -OR- Lost in the Haze with a Flock of Seagulls Above a Watery Wake of Sea Jellies 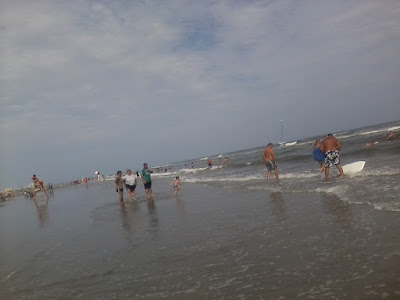 
It was, on balance, a good vacation and Gary, LP, Gloria, and I vacationed well together. It was Gloria's "maiden voyage" to the Jersey shore (just as it was Wendy's several years ago when Gary and I first went with her). 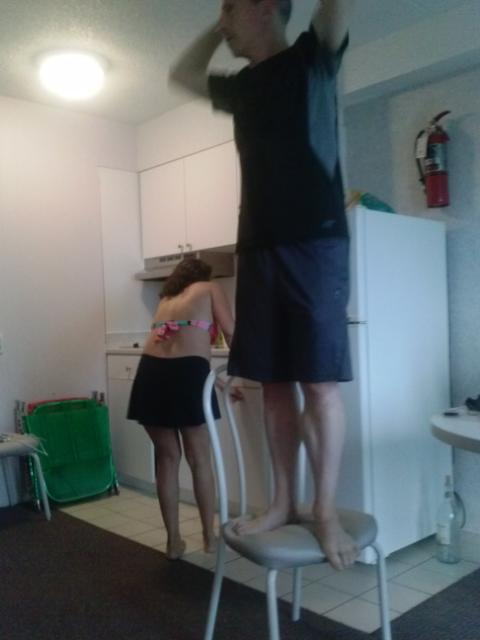 
However, it's too late for an entry or even to begin posting the 45 or so pictures that I took on my Jersey shore vacation. There are actually even more pictures than that -- except the far-superior-quality ones that Gloria and LP took involve group pictures. Mine are mostly scene shots -- human or natural. The ones from Gloria and LP are supposed to arrive over the weekend or next week. (In LP's case, there are photos from two years ago on a previous Jersey shore / Wildwood trip that I am supposed to get.)
This entry features just a handful of those images. 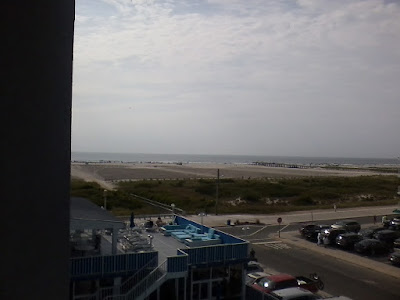 
I actually got back around 430PM this Wednesday afternoon in the District of Crap-by-Umbia on this hot, humid, shitty, and drought dry day -- we are almost in a drought now and it's too goddamn hot (94F-ish for highs), esp. for this time of year -- and I managed to get in a semi-decent gym workout. 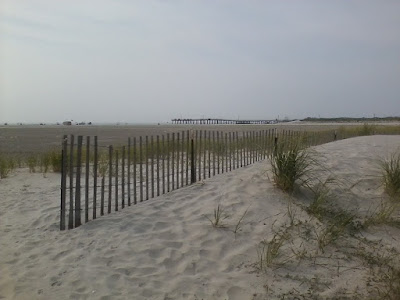 
I then got home but I quickly went back out to meet Dave J. at Local 16 for a couple beers and, more importantly, the kind of chats I love having with him. I'm having some potential serious job issues that I don't want to get into now, but it has to do with the security and stability of my current position and need, perhaps to find a new one. (There was a development -- not involving my job -- when I was away that is quite worrisome.)
Dave also is having some major changes in his life (in his case, potentially very positive ones). Dave also told me about his 17-day trip with his young son that took them all the way up to Montreal, along coastal New England (lighthouses and ghost themes), and back.
OK, that's all for now. I'm so very tired and need to sleep -- and get to work tomorrow and try to have a good and productive day. 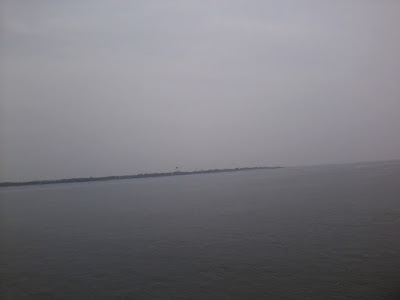 A very hazy view of Cape May from the MV Delaware ferry shortly after departing the Cape May terminal en route to Lewes, Delaware, 12:14PM September 2, 2015.
The Cape May Light is barely visible in this low-resolution picture I took (just to the right of the water tower).
We departed New Jersey the same way we arrived -- by the ferry (both times, I believe, on the MV Delaware, one of only three regular ferries remaining in the fleet). We had originally planned to leave New Jersey by driving up to the Delaware Memorial Bridge but that was changed.
While this shortened the trip, it was very difficult for me to leave New Jersey this way, watching it recede into the distance. What's more, it was so thickly hazy over the Delaware Bay that it made the disappearance of the Jersey shoreline and the objects on it (and the long ago lost life it represents) -- including, most poignantly, the Cape May Light -- a very emotional and (knowing I was returning to frickin' D.C., painful) experience.
I really needed to be by myself (away from my traveling companions). Thankfully, the boat wasn't that crowded (the season is already winding down). 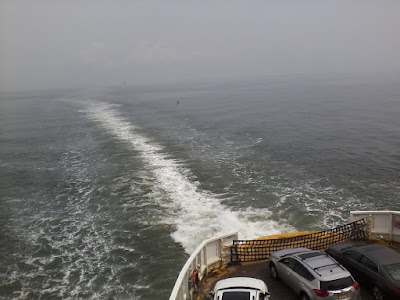 Boat wake of the MV Delaware midway across the Delaware Bay toward Lewes, 12:32PM September 2, 2015.
The seagulls that followed the ferry were amazing -- flying toward the boat only to turn and make graceful arcs over and over. It appeared to me that they were just following the ferry as much for the sheer enjoyment of it as for looking for discarded human food.
Also, near the Delaware side, the bay was thick with sea jellies (one really shouldn't say "jellyfish" since they're not any kind of "fish"), pulsating slowly, nearly transparent, in the slow and listless, somewhat turgid green bay water as the ferry's spreading wake jostled and agitated them.
While I wouldn't want to be in the water with them, jellies are kinda fascinating looking (and the ones I saw were just the small white-translucent ones, not the big colorful ones whose venom can cause real problems).
*******


I've got so many pictures to post. I am sure, though, that will get interminably delayed. I'll try not to let that happen. I will try to post an update tomorrow. In the meantime, read this and this.
Good night.