A Sneak Entry with Some Lovely Pictures of a Fishermen's Shanty Slum On Pedro Bank Middle Cay, a.k.a., GOP Libertarian Paradise Found 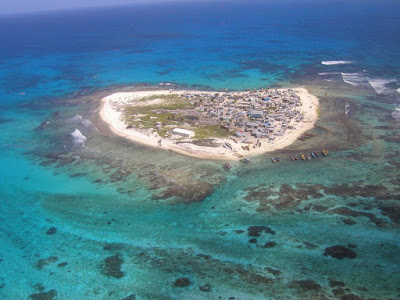 Aerial view of a fishermen's camp -- a shanty slum -- on Jamaica's Middle Cay located on the Pedro Bank.
What?? You haven't heard of Pedro Bank?


From the Wikipedia article, a.k.a. The Keeper of All Knowledge: Pedro Bank is a large sand and coral bank that rises about 80km south of Jamaica and as includes four cays, rocks, and reefs. They all belong to Jamaica. Of the four cays, Middle Cay has a fishermen's camp consisting of a small shanty slum on it. The population varies seasonally, but this Jamaica Observer article from 2012 puts occasionally at about 400. 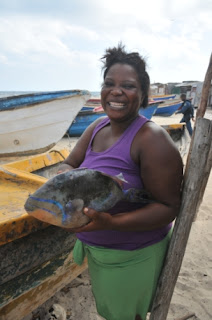 As that article also describes, there's no running water, only capture rainwater, no sanitation or functioning toilets, garbage everywhere, and the public health disaster you'd expect from such abject poverty. In other words, it's a GOP paradise.

Left: Livin' the planned GOP American Dream circa 2025 for anyone foolish enough to be born poor. 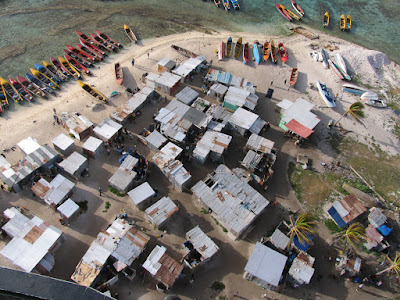 Another aerial view of the fishermen's shantytown slum on the Pedro Bank Middle Cay that belongs to Jamaica.
*******


I have an hour in which I can post a blog entry. As long as I'm in bed by 1115PM, I should be OK. I have to be up by 6AM tomorrow to get to the first of the two-day workshop in Alexandria (thank God it's right by the King Street Metro).
I left work a bit early and got in the bulk of my three-part gym workout. I'm home now on this warm, humid night in my wee, lamp-lit, air-conditioned apartment (at the west end of the U Street Corridor), having eaten dinner, and trying to post a quick entry.
In order to make that possible, I am already removing all the commentary that had accompanied this and instead just post the links. 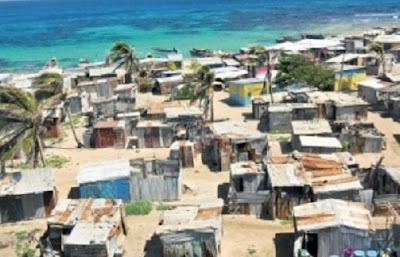 The GOP libertarian metropolis of no government, no nothing in the form of the shanty slum on Pedro Bank's Middle Cay, Jamaica.
*******


Here is an excellent Jonathan Chait article (link embedded): Why Are Republicans the Only Climate-Science-Denying Party in the World?
Here is a single excerpt (the last paragraph):
The "moderate" [Republican presidential] candidates are still, by international standards, rabid extremists. It is the nature of long-standing arrangements to dull our sense of the peculiar, to make the bizarre seem ordinary. From a global standpoint, the entire Republican Party has lost its collective mind.
A few points ...


First of all, I disagree with the premise todays' GOP is conservative: It's rightwing Southernized radical. Big difference. Secondly, my own view is that America's toxic mix of fundamentalism, Shining-City-on-the-Hill notions of exceptionalism, and libertarianism are at play here. Third, it's no surprise that the deepest red of Republican insanity is from the former Confederacy.
I've said it before, I'll say it again: Andrew Jackson in some sense is still President of part of this country. 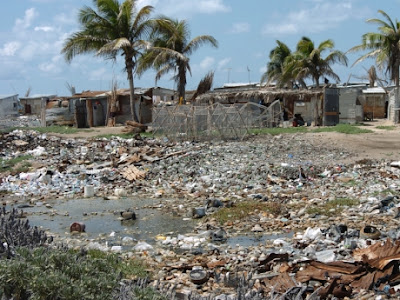 Republican Paradise Found: A dump amid the tiny shantytown squalor on Jamaica's Middle Cay on the Pedro Bank.
*******


And since we are talking about GOP crazy, here is Paul Krugman's excellent Monday New York Times op-ed piece spurred by Speaker John Boehner's announcement that he is retiring at the end of October (link embedded): The Blackmail Caucus, a.k.a. the Republican Party.
As ever, I also recommend reading Krugman's regularly updated blog.
OK, enough of that.


Oh, yes, I should note the big news of the day: Scientists studying images from the Mars Reconnaissance Orbiter have concluded that the dark streaks along the slopes of certain mountains, craters, and canyons are in fact created by flowing water at certain times (in the present) -- albeit briny water mixed with salts. 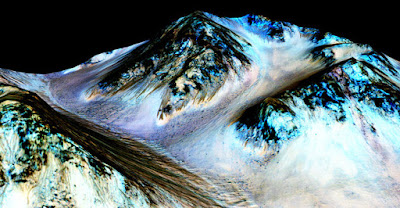 An artificially colorized image of unspecified Martian terrain* showing the dark streaks that are believed to be evidence of intermittently flowing briny water when the Martian atmospheric conditions are favorable.
*I don't have enough time right now to look up the actual article in Nature Geoscience to try to figure out what is this portion of mountainous Martian terrain.
As some have pointed out, saying that evidence has been found of water on Mars isn't exactly new...
Back here on Earth ...


As for the weather here in D.C., it's too goddamn warm, humid, and rain-free. Here is a good CWG entry about all the rain that the D.C. area missed this past week.
This Monday started out a pretend gray-gloomy, cool morning but with a dissipating overcast that gave way to late afternoon / early evening sunshine, dew points around 68F, and a frickin' high of 83F at KDCA (+8F above normal), so it just sucked.
As has been so common of late, rain is still in the forecast but not materializing, although the PoP chances are now 80 for Wednesday and the forecast has it actually cool and damp by the end of the week (high of 66F on Thursday and 63F on Friday and lows around 56F here in the District).


However, there is still a lot of uncertainty as to whether the forecasted midweek cold frontal passage will include a subsequent coastal low along it -- those things usually crap out, especially in this shitty weather second half of the year.
Here was the earlier LWX area forecast discussion:
BY LATE FRIDAY...A SHARP UPPER-LEVEL TROUGH WILL DIG ACROSS THE TENNESSEE VALLEY AND BECOME NEGATIVELY-TILTED AS IT APPROACHES THE EAST COAST. AT THE SURFACE...MULTIPLE NEBULOUS AREAS OF LOW PRESSURE WILL FUSE INTO ONE CONSOLIDATED COASTAL LOW THAT WILL MOVE SLOWLY NORTH ALONG THE COAST. THE EXACT TRACK AND TIMING WILL DETERMINE WHEN AND WHAT THE IMPACTS ARE...BUT THE POTENTIAL EXISTS FOR A PERIOD OF SOAKING WIND-SWEPT RAIN FRIDAY NIGHT INTO THE FIRST HALF OF THE WEEKEND.
Oh, and the discussion (by WOODY!) mentions a tropical storm that could be relatively near the Eastern Seaboard by the weekend. Here is a relevant CWG entry (link embedded): Atlantic depression could become Tropical Storm Joaquin and threaten Mid-Atlantic and/or Northeast by the weekend.


I'm not even going to bother thinking about this right now. Besides, I assume the front would just sweep it far out into the Atlantic. Of course, there's always the chance that everything will conspire to screw us out of any much-needed rainfall.
OK, that's all for now.


I'm going to try to go to the gym again tomorrow night and see if there is any time to post an entry. However, if not, then my next update would not be until either late Wednesday or even late Thursday (assuming I go out after work on Wednesday and don't have time to post an update).
--Regulus
Posted by Regulus at 11:14 PM