A Little Boy Sleeps Upon an Unknown Shore Far from Home: Europe's (and the World's) Refugee Crisis Spirals Out-of-Control Tragedy by Tragedy 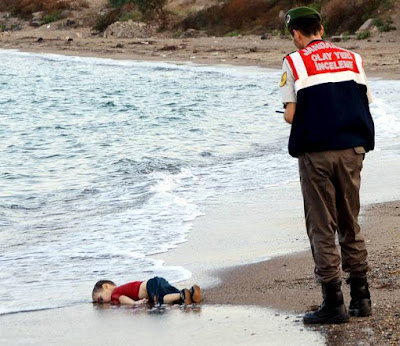 
Blog Editor's Note: I am posting this entry that is a partial reposting of this New York Times article and the pictures in question, although I used the pictures instead that appeared in this UK Independent article* and this NBC News story -- rather than an entry containing my main batch of Jersey shore vacation pictures.
I am posting this entry rather than an entry containing my main batch of Jersey shore vacation pictures. I am doing so because I feel it important to relate this story of one family's horrible tragedy and how it is linked to the massive refugee and humanitarian crisis underway in Europe as a result of the Middle Eastern situation, especially in Syria. It also, unintentionally, forms a jarring counterpoint to my seashore vacation pictures. (I intend to post those seashore pictures over the weekend and the group ones once I receive them from Gloria and/or Larry P.)
*For the main images, I used the versions that appeared the other sources because they are a bit brighter (to be clear, I don't know which is the "true" one, and it's not really important) and the second one is zoomed in a bit to show more clearly that which must be seen.
To be clear, Abdullah Kurdi lost both his young sons and his wife on a failed crossing from the coastal Turkish city of Akyarlar to the Greek island of Kos about 5 kilometers away (and the shortest entrance point into the EU). In all, about a dozen people perished on that rubber raft. I don't think it's an overstatement to say the smugglers are guilty of murder in each of those deaths, and if the Universe metes out justice in whatever fashion, they are certainly deserving of it.
As for the larger ongoing refugee crisis, it's truly of staggering proportions and needs to be a bigger news story rather than the silly garbage that passes for infotainment in the U.S. 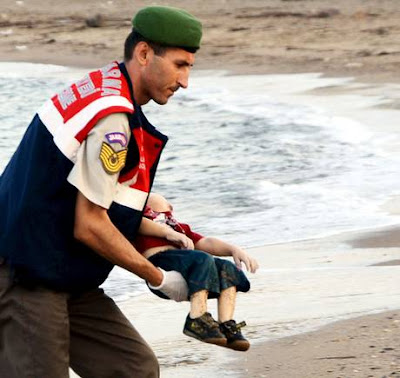 The Turkish gendarme carries the body of Alyan Kurdi away from the sea along Turkey's Bodrum peninsula, September 2, 2015.
*******


ISTANBUL -- The smugglers had promised Abdullah Kurdi a motorboat for the trip from Turkey to Greece, a step on the way to a new life in Canada. Instead, they showed up with a 15-foot rubber raft that flipped in high waves, dumping Mr. Kurdi, his wife and their two small sons into the sea.
Mr. Kurdi tried to keep the boys, Aylan and Ghalib, afloat, but one died as he pushed the other to his wife, Rehan, pleading, "Just keep his head above the water!"
Only Mr. Kurdi, 40, survived.

Sleep little one, at least for now.
"Now I don't want anything," he said a day later, on Thursday, from Mugla, Turkey, after filling out forms at a morgue to claim the bodies of his family. "Even if you give me all the countries in the world, I don't want them. What was precious is gone." 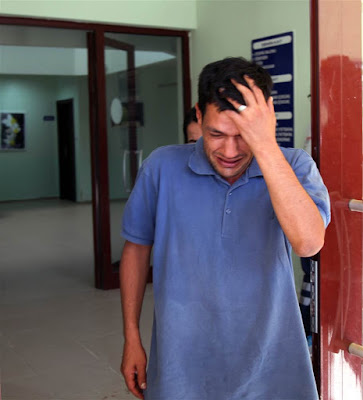 
It is an image of his youngest son, a lifeless child in a red shirt and dark shorts face down on a Turkish beach, that appears to have galvanized public attention to a crisis that has been building for years. Once again, it is not the sheer size of the catastrophe -- millions upon millions forced by war and desperation to leave their homes -- but a single tragedy that has clarified the moment. It was 3-year-old Aylan, his round cheek pressed to the sand as if he were sleeping, except for the waves lapping his face. 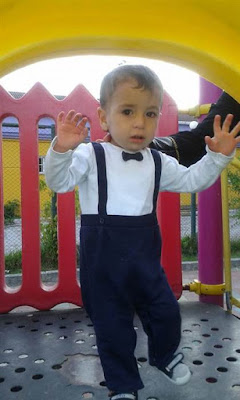 Rocketing across the world on social media, the photograph has forced Western nations to confront the consequence of a collective failure to help migrants fleeing the Middle East and Africa to Europe in search of hope, opportunity and safety. Aylan, perhaps more even than the anonymous, decomposing corpses found in the back of a truck in Austria that shocked Europe last week, has personalized the tragedy facing the 11 million Syrians displaced by more than four years of war. 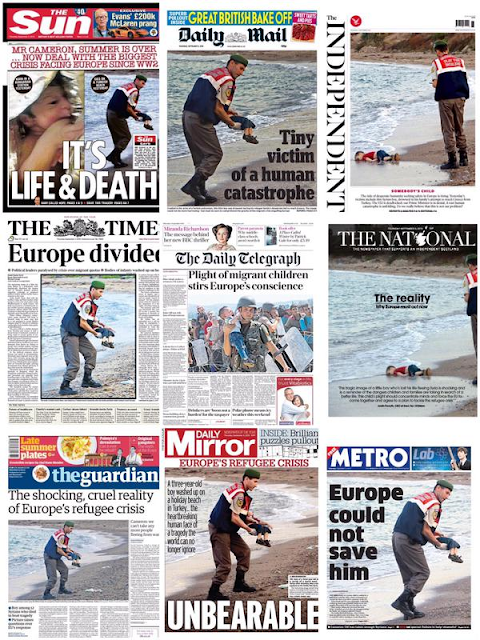 Photo montage of the front pages of the main UK national newspapers for Sept. 3, 2015 as sent out in a tweet by BBC Radio 4's Nick Sutton and reposted in the NBC News story that is linked above.
*******


The case of this young boy's doomed journey has landed as a political bombshell across the Middle East and Europe, and even countries as far away as Canada, which has up to now not been a prominent player in the Syria crisis. Canadian officials were under intense pressure to explain why the Kurdi family was unable to get permission to immigrate legally, despite having relatives there who were willing to support and employ them. So far, the government has only cited incomplete documents, an explanation that has done little to quiet the outrage at home and abroad...
Related articles (links embedded):


Brutal Images of Syrian Boy Drowned Off Turkey Must Be Seen, Activists Say (New York Times - Sept. 2, 2015)
If these extraordinarily powerful images of a dead Syrian child washed up on a beach don't change Europe's attitude to refugees, what will? (UK Independent) 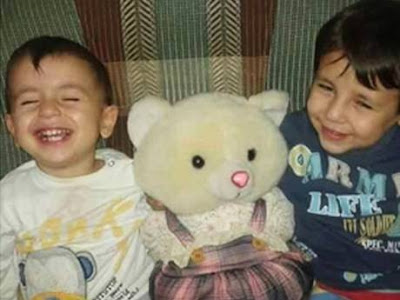 A family photo of Aylan and Ghalib (i.e., "Muslim refugees") showing these two little boys who perished in the Mediterranean Sea in a happy moment in their far too short lives.
Their "crime" to which they were a "party" was their parents' desperate efforts to flee a savage and unending war zone for a better life.
*******


Here is another story on the sheer scale and scope of the refugee crisis in Europe (link embedded): Migrant Chaos Mounts While Divided Europe Stumbles for Response (New York Times - Sept. 3, 2015) 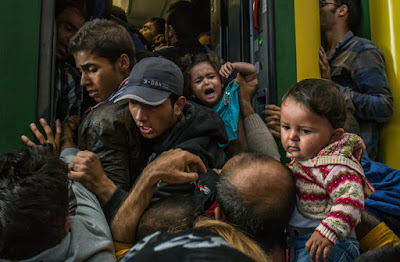 
LONDON -- The struggle among European leaders to develop a coherent response to the spiraling migrant crisis intensified on Thursday as fresh calls for a blocwide plan were met with recriminations about the Continent being swamped with Muslims.
Even as wrenching photographs of a drowned 3-year-old Syrian boy riveted world attention and galvanized public demands for action, the leaders' first fumbling efforts seemed only to highlight Europe's divisions, as they bickered over who should take responsibility for the migrants rather than unifying around a new policy. 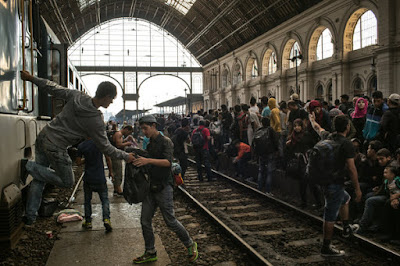 
The chaos was searingly illustrated by a daylong standoff in Budapest and its outskirts, where hundreds of migrants crammed into trains they thought were bound for Austria and Germany, only to be herded into camps.
The hundreds of thousands of migrants pouring into Europe this summer have posed a third great challenge to the Continent in the last decade. Yet, neither of the first two, the still smoldering euro crisis and the war in Ukraine, posed the same degree of divisiveness -- between left and right, rich and poor and east and west. And both, for all the anger and debate they sparked, seemed ultimately manageable.
The migrant crisis seems different. With war, instability and poverty spreading through Africa and the Middle East, a prosperous and peaceful Europe is proving a powerful attraction to potentially millions of people who have wearied of the constant turmoil and day-to-day struggles for survival. There is little sign the flow will soon subside... Photo caption: A family of distraught Syrian refugees, including a small child, begged police for help on train tracks outside Bicske after Hungarian authorities blocked their journey to western Europe.
*******


Related article: Which Countries Are Under the Most Strain in the European Migration Crisis? (New York Times - Updated Sept. 3, 2015) 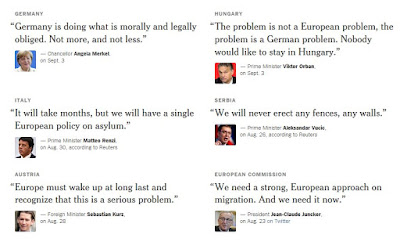 Quotes from European leaders on the refugee crisis. Click on image for larger version.
******* 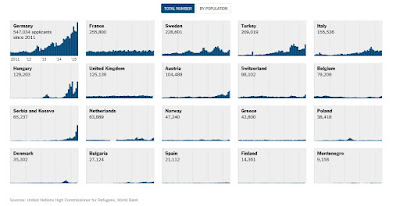 Refugee totals by European country through, I believe, August 2015. Adjusted for population, though, Hungary and Sweden have had the most refugees per capita. Click on image for larger version or, alternatively, see New York Times article directly above for the actual interactive chart.
*******


As a concluding thought, the world really does seem to be spiraling out of control in a bad way. What's more, I shudder to think of what happens when serious change effects including rapid sea level rise and resulting coastal lowland inundation really start kicking in the coming decades. That could make these war-induced refugee crises pale in comparison.
Sigh.