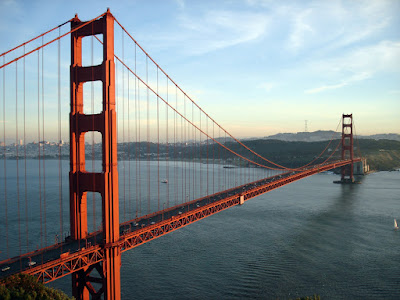 The Golden Gate Bridge (one of the most awesome and wonderful structures that God ever allowed to be made), January 2007.
*******


I need to visit San Francisco (again) ... and my former coworker and friend Amanda lives there (sorta near the Sutro Tower visible in the above image). I think that would be fun.
Speaking of San Francisco and its most iconic of structures, here is "Godzilla versus the Golden Gate Bridge" in the 2014 movie Godzilla:
... kinda frickin' awesome, and Godzilla is totally monstrous bad-ass.
And here is the total destruction of the Golden Gate Bridge:
This is from the ridiculous 2004 movie "10.5".


Oh, and here is a nearly total destruction of a big part of San Francisco in 2259 from the movie Star Trek Into Darkness as Khan (played brilliantly by the awesome Benedict Cumberbatch) crashes the star ship USS Vengeance into Star Fleet headquarters (a sort of 9/11 attack raised two orders of magnitude) ....
Wild. I love Star Trek.


And as I said to Brett at LL last night, we have Lucille Ball to thank for the existence of Star Trek.
That aside, why do I watch disaster shit like this in the middle of the night when I'm drunk?? I'm sorry, God**. I really am. Please forgive me.
**Or whatever frickin' advanced civilization computer simulation in which we are quite possibly living, but could only know via the most subtlest of flaws in its physical laws. YOU are necessarily materially God to me, so I suppose I must react to You as such.
Did I mention I love hippos? I sure do. I just don't want any to chase and eat me up ...
I had an awesome and wonderful night tonight with my (straight, married with a young son but living here in D.C.) friend Dave J. at Old Ebbitt Grill (at the Old Bar). (We were going to go to Ghibellina but went to OEG instead.)
Dave is brilliant and insightful and so fun to be around (we were talking about Donald Trump -- whom he likes conceptually for what he represents -- and the GOP), and how Fox News' effort to destroy Trump at the Thursday debate won't stop Trump. Putting that aside, I really like Dave. We then stopped at Stan's, yes, Stan's, the ultimate Old School D.C. place -- indeed, I wasn't sure I'd be let in, but I was -- and then briefly at No. 9 (where Aaron was working tonight) and, by chance, met up with LP.
It was a very good night.


I'm going to bed now. Not sure what I'm doing tomorrow (Sunday). I don't think my wrist is healed enough to do a bike ride. Oh, and my next update won't be until at least late Monday / early Tuesday.
--Regulus
Posted by Regulus at 4:07 AM