Thunder Grill Pictures; Local Weather & Global Climate Warming Update; and Total Solar Eclipses Past & Future -OR- Is It All So In Vain? 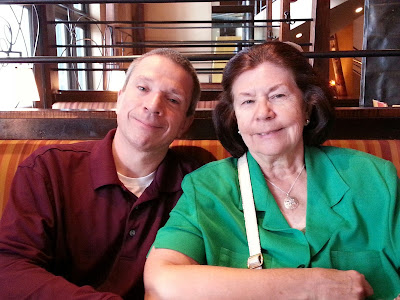 
This entry includes the Thunder Grill lunch pictures from Wednesday that I wanted to post among other images. Here is another one similar to the above one (slightly different pose): 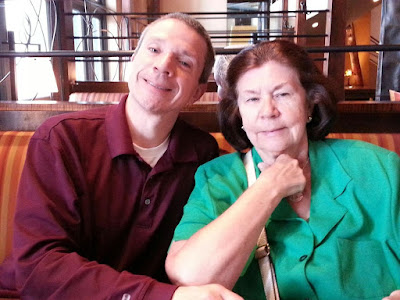 Again, yours truly, Richard Todaro, and my mom, Thunder Grill, Union Station, Washington, D.C., 1:48PM August 19, 2015.
My mom smiles more in photographs these days. Gone is that refugee-who-just-barely-escaped-Nazi-occupied-Poland (but some of the family didn't) look.
*******


I'm home on this Friday night, although I'll go out later to one or more of my usual places. I made dinner, and it actually came out well: A boneless rib eye steak (I was sort of craving a steak), slightly runny mashed potatoes (right combo of milk, butter, and flakes -- no, not that kind of flakes), and steamed broccoli and carrots (with the broccoli fresh enough so that cooking it didn't stink up the apartment as happened the other night).
I would love to be a vegetarian but I'm just not. 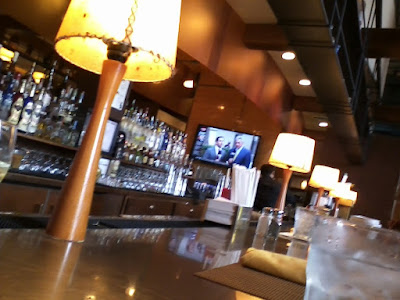 
It's a pleasant enough evening as far as that goes -- temps. around 77F and the dew point about 56F so that the night should be sorta OK.
However, the weather -- as I wrote in my previous -- is going to the kind I really dislike: Wall-to-wall sunshine, too warm (mid-to-high 80s Fahrenheit), and basically zero chance of rain for 7 to 10 days. Furthermore, the lack of higher humidity -- with dew points in the 50s Fahrenheit -- represents no favor since it just makes the intense light and heat of the Sun at these temperatures all the more annoying. (Oh, and the LWX area forecast discussion earlier today used the weird and annoying phrase about a lack the next few days of "quality moisture" several times. Is that the new buzz term??)
True, at night it is more pleasant without the humidity. However, my solution is just to stay in an air conditioned space. 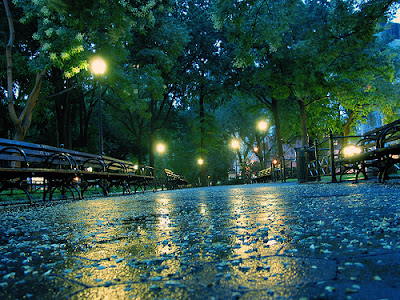 A summer evening that is more to my liking (provided it's not as warm and humid as a rainforest).
*******


It is also true that I am hoping for (mostly) sunny, summery warm, and humid weather for my upcoming annual Jersey shore visit, but in the meantime, apparently being stuck for life here in D.C., it's just profoundly annoying and bothersome. It's just too damn bright, warm, and sunny. 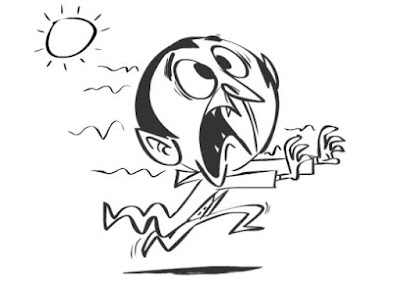 I'm still annoyed at how screwed we were out of frickin' rain yesterday and now it's going to be wall-to-wall sunshine for, maybe, weeks. Oh, yes, CWG had another entry featuring some of the lovely cloud images from sunset yesterday as the t-storms mostly missed the D.C. area but created dramatic sky vistas. 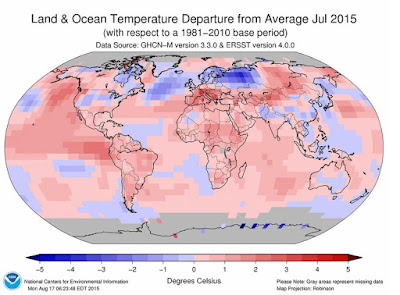 
By the way, NOAA reports that July 2015 was the warmest July (and thus the warmest month of any month) on record since records have been kept. Here is the Capital Weather Gang entry on it (link embedded): July was the hottest month in Earth’s hottest year on record so far.
The story got picked up by a number of news media outlets. The AP story I read actually did NOT reflectively fall back on the usual (and, as ever, I'm channeling Paul Krugman) "views differ on shape of planet" false equivalency balance masquerading as journalistic objectivity to discuss a fact as self-evident as anthropogenic climate change (i.e., global warming. 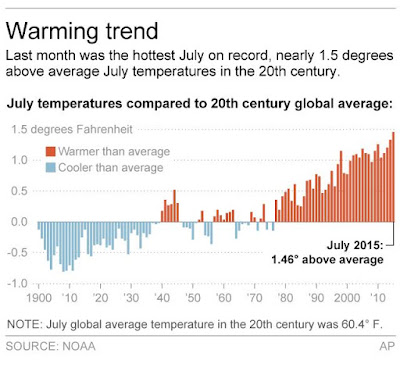 
Here is the actual NOAA report: Summary and Global Analysis.
This NOAA State of the Climate website should be required reading, if not for the Fox & Friends viewing set then at least you, Dear Reader.
The NOAA summary also explains that the first seven months of 2015 have been the warmest on record. Many climate scientists expect 2015 to be the warmest year on record thanks to a climate change and the major warm ENSO event underway. 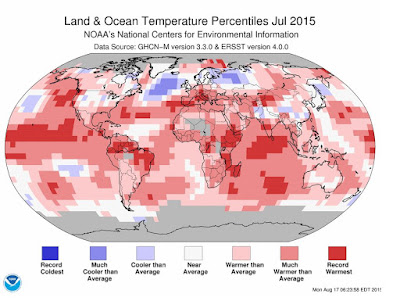 Land - ocean temperature percentiles for July 2015 versus the full 136-year record stretching back to 1880.
To be clear, I think these are percentiles for the full 136-year period. It gets a bit tricky because NOAA uses the current 1981 - 2010 base period and the 20th Century average as well as the full 136-year period depending on what is being shown.
Oh, and the colder-than-normal spot southeast of Greenland in the North Atlantic Ocean has been a persistent, intriguing feature that might be linked to a negative AO/NAO or even the melting of Greenland itself pumping fresh, cold water into the Gulf Stream.
Maybe its a new Younger Dryas getting going ...


Yes, Tea Birthers, we know that Antarctic sea ice coverage was near an austral winter high, but this is probably associated with overall warming.
OK, enough of that. 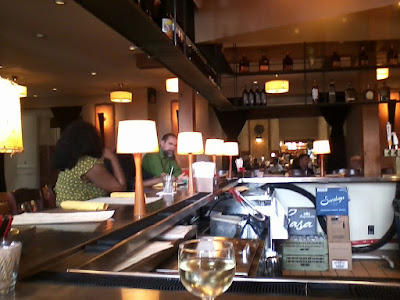 
As for my weekend, I cannot spend too much money because I need to have enough for the 4+ days in Wildwood Crest / Wildwood / Cape May, and because next pay period looks to be a difficult one because I have to pay my rent, too.
For tonight, I guess I'll go to Larry's Lounge. As it is, I need to give Gary a check for $400 representing all but $100 of my part of the shore trip. Then I'll go perhaps to No. 9. (Oh, yes, my steak dinner I described above cost "just" $19.38 at the Safeway including some other groceries.) 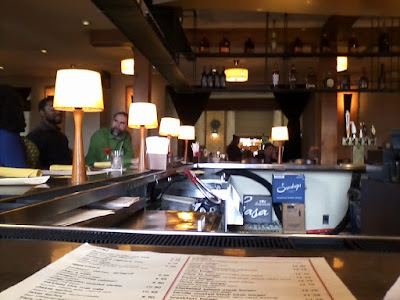 
For tomorrow during the day, it's a gym visit. Of note, I had a good gym workout last night including 6.5 mile jog, weightlifting, and swim. Tomorrow night, I'll try to post my usual jukebox Saturday night entry (I have several songs I'd like to feature). Finally, on Sunday, I'm going to try to take my first bike ride since before I hurt my right wrist (or rather, ulna). 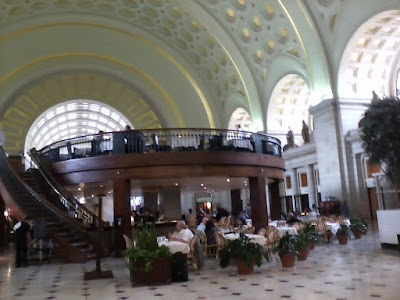 
I've been reluctant to ride that old piece of junk bike because it is such a piece of junk, and I was worried any (ready made) issue with it (such as bollixed up gears) could make it difficult for me to ride and have exacerbated whatever internal bruise there was (and that now seems to have fully healed). Maybe I'll do a W&OD ride from the end of the Silver Line. I'll see.
Total Solar Eclipses, Past and Upcoming ... 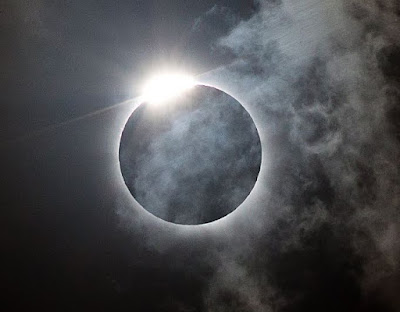 
One last item, not only is today my good friend DD's birthday, but it is just two years to the day until the great total solar eclipse of August 21, 2017. I fully and totally intend to see that eclipse -- with Gary and DD and perhaps others -- on the coast of South Carolina in the path of totality. 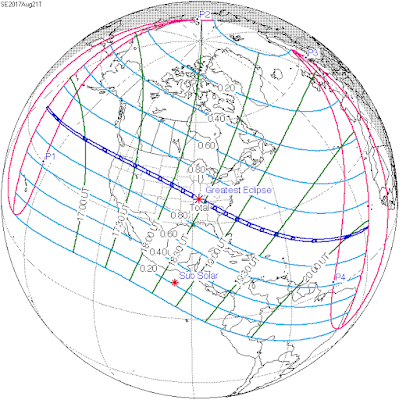 
While I've already seen an eclipse -- in particular, this one on February 26, 1998 on the island of Guadeloupe in the French West Indies, and what an intense experience it was -- the August 21, 2017 eclipse is the one for which I've quite literally been waiting since that long ago day in 1979 when -- as a 9-year old living with my paternal grandparents and dad* in Long Branch, New Jersey, I was lying on my makeshift bed* and reading a National Geographic magazine that I received in the mail every month.
*My mom and Ray were in Belgium where he was stationed at SHAPE.
**I slept on a mattress on the floor that I shared (for years) with my father. Yes, I know that sounds odd. (Today, I don't even have a mattress, just quilts, blankets, and pillows. And stuffed animals.) 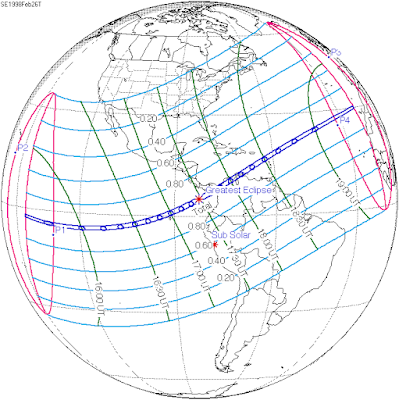 
On that long ago day in 1979, I was reading an article about the total solar eclipse of February 26, 1979 that had recently happened, and I came across a sentence in the article stating that the next total solar eclipse in the Lower 48 would not be until the year 2017. I remember figured out that my age would be 47 in 2017, a number I could not conceive of. 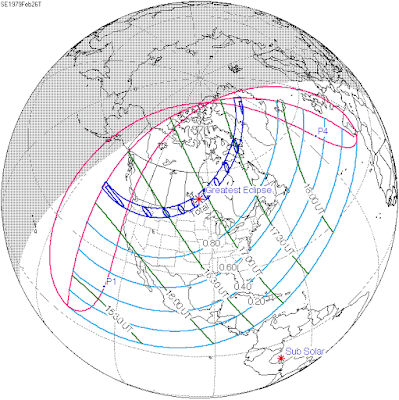 
That was such an impossibly far away date -- August 21, 2017 -- to a 9 year old, and yet it has always stayed with me as this very distant mile marker that now just 2 years away. I'm not sure how I'm going to feel when it actually arrives.
One last item about the 2017 eclipse: It will be the first total solar eclipse visible in the Southeastern U.S. since the total solar eclipse of March 7, 1970. I was a 3-1/2 month old baby and being cared for that day by my grandparents in Long Branch, N.J., while my mom and dad -- then actually still married -- went to see that total solar eclipse somewhere on or near Wallops Island, Virginia. 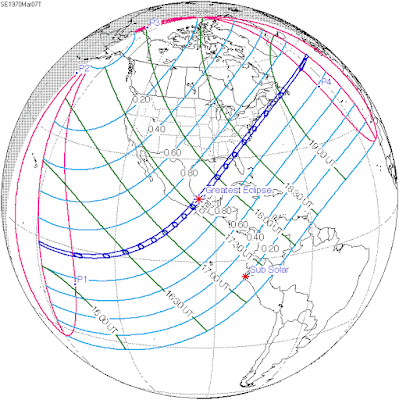 
To be clear, the path of totality just missed New Jersey, as well as the District of Columbia.*
*D.C. itself will not have a total solar eclipse for many centuries -- possibly a millennia or more (assuming it even exists then). I've checked Fred Espenak's solar eclipse catalogue and I cannot find anything. The nearest one -- which misses the District proper by just a few miles (crossing suburban Maryland), although Baltimore is in the path of totality is on April 14, 2200: 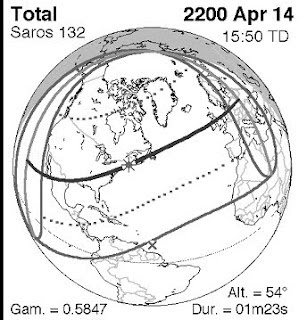 Path of total solar eclipse of April 14, 2200 along with Saros cycle. Image from Fred Espenak's Five Millennium Catalog of Solar Eclipses: -1999 to +3000. He has a lunar eclipse one, too.
Such a strange thought: An eclipse right here in the D.C. area but 205 years from now in what will be a totally different world, and I and every human alive on this planet right now will be long dead and mostly forgotten -- even a newborn today who lives to be a super-centenarian will have been dead for about 75 years.
*******


As for the 1970 one, my mom remembers my dad driving down from New Jersey and around the Delmarva near Assateague like a lunatic to get into the path of totality, which they did just in time.
That eclipse with its highly elongated north-south path MIGHT -- just HAS to -- be the one Carly Simon is referencing as taking place in Nova Scotia to which the unidentified vain person is flying in his Learjet to see in her wonderful song "You're So Vain."
So let's end with that song (you can pick out the relevant part):
Nice.
OK, that's all for now. My next planned update will be tomorrow evening.
--Regulus