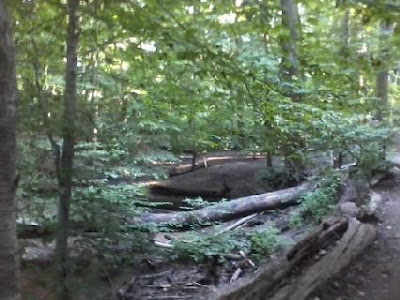 This is a somewhat disjointed Saturday entry and with no pictures except for the unrelated lead image.
For starters, it is a bit painful for me to type. I had a slight bicycle mishap yesterday in which I somehow pulled a muscle or otherwise injured my left hand, specifically, the end of the ulna where it connects to the carpal bones (the rounded area that sort of juts out).
At least I think it's the ulna.
Long story short, I biked to work and that was fine. I then left work, walked with Andrea and the bike in tow to the Archives / Navy Mem'l / Penn Quarter / [APPEND ANOTHER NAME HERE] Metro station. It was so damn hot and sunny and I wanted a dark, cool place, so I went to Cuba Libre.
I found a spot at the back bar and ended up having a few drinks, some appetizers, and a nice conversation with a Hispanic lady who turned out to be an MPD officer and she had just gotten back from a Fort Lauderdale vacation.
It can't help but be weird trying to socialize with someone you know is a police officer, all the more so a 45-year old gay man and a 30-something year old lady. She was from New York City and lived for a while in Jersey City, N.J., and I heard her accent immediately.
Anyway, after we parted, I was biking back and was going up 13th Street by N Street. I crossed to the side where is the Solo Piazza -- yes, that place -- and went onto the sidewalk. The sidewalk area was enclosed due to construction work on the building, so it was sort of a passage way.
There was a young lady walking a chocolate-colored lab dog. I couldn't tell if I had enough room to go around them or not, and at the last second, I decided that I did not. However, I ended sort of slow motion crashing into some sort of iron bar associated with a planter (I'm a bit fuzzy on that since it happened fast).
I came to a stop but only by putting a lot of pressure on my left hand -- hence the injury. I almost went over the bike handle but stopped myself, letting out a real groan.
I apologized to her and her dog looked earnestly at me -- almost, dare I say, concerned. She said something to the effect, "No, I'm glad you're OK, that was quite a stop you made."
Anyway, it started to hurt and really hurts now, although there is only the slightest swelling and no discoloration.
In lieu of going to the gym today -- while I could jog and do core and swim a bit, I certainly could not do any weights -- I am going to take walk with Dave J (from Friendship Heights to Palisades and back). I went to the gym 3 times last week (Monday, Tuesday, and Thursday), so I think I'm OK in skipping this Saturday. And I doubt I'll be able to take a bike ride tomorrow. (To be clear, the bike itself was fine.)
OK, that's all for now. I'll try to post a jukebox Saturday night entry later.
Oh, yes, this needs to happen, like, yesterday.
--Regulus
Posted by Regulus at 1:02 PM