Reposted: Phil Plait's "Bad Astronomy" Blog Review of the Rosetta and Philae (!) Findings on Comet 67 /Churyumov-Gerasimenko: "What a Comet Looks Like ... From 9 Meters Away!" 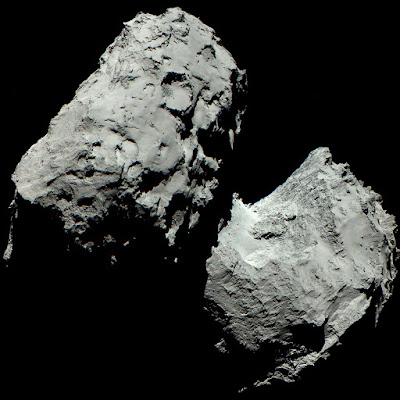 Amazingly, a "true color" image of the very, very dark gray Comet 67P/Churyumov-Gerasimenko.
As explained here, the image is composed of three images taken with the Narrow Angle Camera (NAC) of the scientific imaging system OSIRIS in red (centered at 744 nm wavelength), green (536 nm), and blue (481 nm) filters on 6 August 2014 from a distance of 120 kilometers. The image covers roughly 4 x 4 km at a resolution of about 3.9 meters per pixel. Credits: ESA/Rosetta/MPS for OSIRIS Team MPS/UPD/LAM/IAA/SSO/INTA/UPM/DASP/IDA
Apparently, the comet's constituent chemical compounds make it reek something fierce.
*******


It's a bit too late for me to post the entry I intended -- just a semi-dyspeptic update with a political focus, although my day ended a on relatively high note as I had a good gym workout tonight after work, had a nice chat with Fred B., and then had two beers with Dave J. at Local 16 (being late night Monday, it was otherwise empty) while chatting with the manager / bartender Jason. 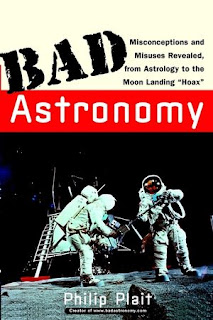 
However, the series got cancelled after book 2, i.e., as I was writing book 3, in part because what I wrote was such shit -- a textbook instead of an engaging book -- although the second book didn't do that great. (I'm not even sure what book 4 was supposed to be.) 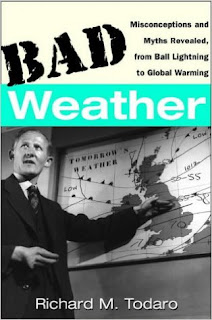 In fairness, I had zero guidance from the publisher and was a frickin' idiot. (That summary in the link would have been helpful to have. Oh, and I never chose that proposed book cover -- it was just given to me.) Today, I would write something very different.

Anywho, this Phil Plait piece is about a flurry of findings from the Rosetta probe to Comet 67P/Churyumov-Gerasimenko including from its brave and wonderful little Philae lander that has had trouble waking up owing to its unceremonious landing on the comet. It most recently and spectacularly woke up -- alas, only briefly -- in mid June. 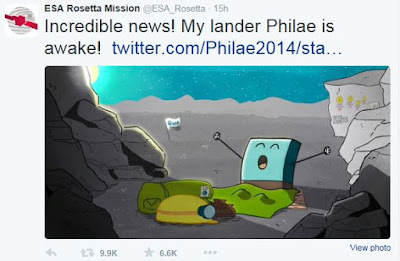 Wake up, baby, and keep on talking. We're listening. We want to hear everything you have to say.
*******


What a Comet Looks Like … From 9 Meters Away!
By Phil Plait
Source here. 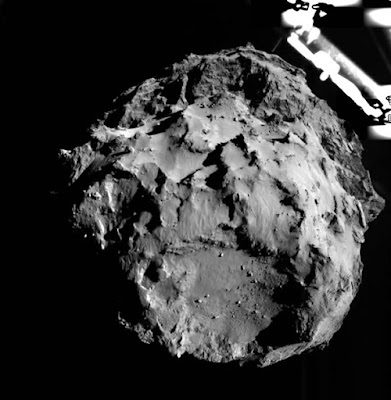 On its way down, with 3.1 km yet to go, Philae took this shot of the comet (with a part of the lander visible to the upper right).
Photo by ESA/Rosetta/Philae/ROLIS/DLR


The European Space Agency has just released some fantastic close-up images taken by the Philae lander of the comet 67P/Churyumov-Gerasimenko. This release came out along with a passel of scientific papers (in Science magazine behind a paywall; here’s a summary) about results from the Rosetta probe’s lander, too.
When I saw these images the hair on the back of my neck stood up. These photos may not look like much at first, but when you realize you’re seeing the surface of a comet hundreds of millions of kilometers from Earth, and can see objects as small a a centimeter across … well, I hope your brain gets that same electric shock mine did.
Here’s the story. 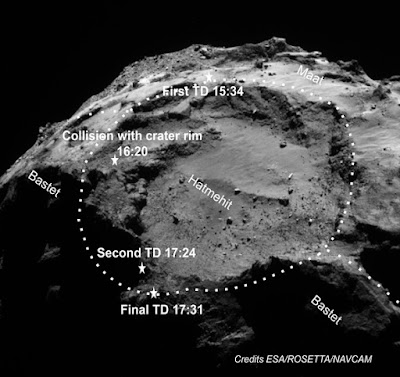 The many touchdown sites of Philae (labeled TD in the image).
Photo by ESA/Rosetta/Navcam


On Nov. 12, 2014, at 15:34:06.471 (± 1 second), the Philae lander made contact with the surface of the comet 67P/Churyumov-Gerasimenko.
The first time. Two malfunctions (a cold-gas jet system designed to push the lander down onto the comet’s surface didn’t fire, and neither did the harpoons meant to anchor Philae to the comet) occurred, and instead of landing and staying secured to the surface, Philae bounced high into space, only to land again, bounce again, and finally skid (that is, make multiple shallow, short bounces) to a stop many hours later, and many hundreds of meters from its intended destination.
It fell to rest on its side, shadowed by an overhang of ice and rock. Contact became intermittent, and a few days later the battery fell below levels needed to keep the probe awake. It went into hibernation.
Then, months later, it woke up! The solar panels had collected enough energy to turn the lander back on. Contact was again intermittent, and the future of the lander’s lifespan is still unclear. But it performed like a champ, taking images, spectra, and other measurements that have returned unprecedented knowledge about the comet back to us on Earth. 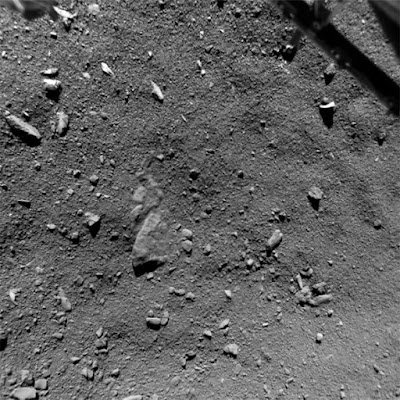 The comet from 9 meters up, seconds before first contact.


This shot was taken when the lander was a mere 9 meters -- 30 feet -- from the surface of the comet. The area you’re seeing is 9.7 meters across, about the size of one half of a tennis court. It shows that the surface is covered in a coarse regolith (loose material that hasn’t consolidated into a solid mass; we see similar surfaces on airless bodies like the Moon), and rocks of various sizes, ranging from centimeters to meters across. You can also see material of different darkness; some are quite dark while others are reflective.
Some of the rocks are smooth, and some sharp. In one of the papers published (Mottola et al.) they analyze the images, speculating that the smooth rocks may have once been embedded in ice or boulders, and then freed after the material they were embedded in disaggregated. The rougher ones with flat faces may be from bigger rocks that fell and shattered. Some of these chunks are partially buried in the regolith; are they being buried as the looser stuff piles up or being exhumed as the material moves away? Static pictures make that difficult to discern. 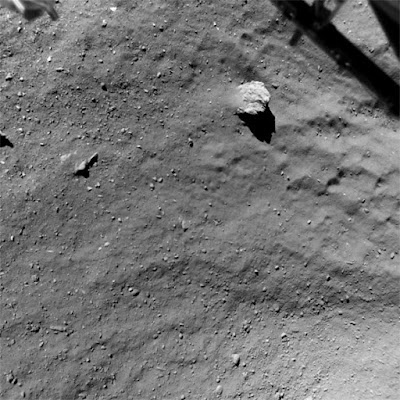 
From higher up there’s more of an overview; the shot above was taken when Philae was still 48.5 meters from first impact. The area seen is about 50 meters across, half the length of a football field. The big rock, nicknamed Cheops, is about 5 meters in size. It may be an individual piece, or an outcropping of bedrock below. What’s very interesting about it is the arrowhead-shaped depression is sits in (the point is to the right), and the fine-grained material piled up on its left. That’s a wind-blown feature! Material immediately upwind of a rock gets picked up and blown around the rock, leaving behind an arc-shaped moat, and a pile of finer grains on the rock’s downwind side. 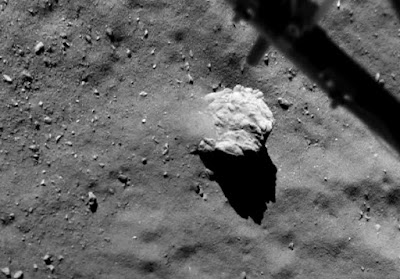 A rock 5 meters in size sticking up out of the regolith.


What could cause this? My first thought was ice turning into a gas (sublimating) as the comet warms up on its approach closer to the Sun. But I didn’t think this could be right; that gas would expand so rapidly that it wouldn’t have much effective pressure very far from the vent. It turns out that may be right; Mottola and his co-authors note that as well and wonder if perhaps this is caused by temporary gusts of material from impacts as the comet moves through space. I like this idea, though it seems that this would take a long time, and a comet’s surface doesn’t last long as the ice beneath it sublimates. However, it would also explain some of the erosion features seen as well. Hopefully as time goes on we’ll see more work in this area. Remember, these are first, initial results!


I love the image above (from Biele et al.): It was taken by the Rosetta probe itself and is a before-and-after picture of where Philae initially hit the comet. The left image was taken 15 minutes before impact, and the one on the right 25 minutes later, about 10 minutes after Philae bounced. You can see the impact craters from the lander! The two pits marked B and C are from the lander, and are 10 and 20 centimeters deep, respectively (the feature marked A is probably just a coincidental small undulation in the surface, casting a shadow that makes it look like a crater). This shows the regolith on the surface is at least 20 centimeters deep, too.
Knowing how deep the craters are and how dense the material is, scientists estimate about 180 kilograms of material was ejected at impact, which is more than the mass of the lander itself (100 kilograms). That’s interesting. All the data from the first impact indicate the material must be incredibly soft, like talcum powder. However, the surface there probably doesn’t have extremely fine-grain stuff in it, so whatever it is must be very loosely packed to have such weak compression strength.
This is very different from where the lander eventually wound up, where the surface is more like solid rock. A comet’s surface varies considerably from place to place. Interestingly, another experiment on Philae (which sent electromagnetic signals through the comet) indicates the interior of the comet’s small lobe is actually homogeneous over all.

[Animation of the lander's descent images. Photo by ESA/Rosetta/Philae/ROLIS/DLR]
And what’s the comet made of? A chemical analysis experiment on Philae (called Cometary Sampling and Composition) was going to drill and sample the comet, but it obviously couldn’t. However, the impact did excavate material from under the surface, and some of this flew into the sampling tubes of the experiment (they call this “sniffing mode”).
It found water, methane, HCN, CO, methylamine, and 11 other types of molecules, many of them organic (that is, containing carbon; don’t confuse this with output from biological processes!). These were probably built up from simpler molecules by ultraviolet light from the Sun and subatomic particle impacts, which break up simple molecules and allow them to build up more complex chemistry. The nitrogen probably came from ammonia, which has been depleted to create these more complicated molecules.
Many of these chemicals are pre-biotic, not biological themselves but necessary ingredients for life. They are used to build sugars, amino acids, and even nucleobases (the building blocks of RNA and DNA). That’s fascinating! It doesn’t mean that these chemicals were brought to Earth by comets necessarily, but it does mean they are not terribly hard to manufacture via natural processes. We knew this before, really, but it’s good to see it confirmed from measurements taken right there at a comet.
One thing I was excited to see in one of the papers (Kofman et al.) is that the likely landing site of Philae has been narrowed down to an area of just 21 x 34 meters! This was done using measurements by the Comet Nucleus Sounding Experiment by Radiowave Transmission (CONSERT) experiment. The rough position was triangulated along a strip about 150 meters long, and then narrowed down to this area by using signals from the lander that passed through the comet itself. Images taken from Rosetta have not been able to nail down the position of the lander unambiguously, so hopefully these results will allow that.
I’m glad we’re finally seeing so much of the science from Philae; most of it has been under wraps for months as the scientists poked through it (and a lot of it still is, awaiting more data to come down to make a complete set so that context can be gleaned).
And as much as we’ll eventually learn from studying 67P, one thing that’s important to remember is that every comet is different! We’ve visited quite a few now, and their diversity is amazing. Some have lots of water ice, some very little. Some are active, some quiet, with different structures, different compositions, and more. As I read the papers and looked at the data, I was struck by how much information we now have on 67P … and how much we still have to learn about comets as a population.
*******

OK, that's all for now. I'll try to update the blog tomorrow.