Just Another Disjointed Late Night Update In Lieu Of My Planned Entry -OR- Anchor Babies Aweigh! 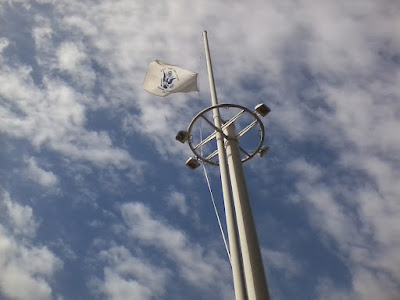 
OK, I started an entry but it quickly became too lengthy. It's on the topic of my Wednesday dental visit and put in the large context of my many dental problems that I've had as an adult (and that I've written about on this blog including here and here).
It was an indeterminate visit in terms of finding out if something is really wrong with #13, but I have to go back for a procedure on another tooth on Sept. 10th.
However, I just don't have the time or energy tonight to complete that entry and post it, esp. as it is now 12:45AM, and I'm very tired.
This entry is just a brief update with only the lead image.
I had a decent gym workout tonight (the usual three parts) and got in three workouts -- that's one extra than usual -- this week ahead of my upcoming Jersey shore visit to Wildwood and Cape May when I won't be going to the gym. (I probably won't go until either next Wednesday or Thursday.)
I'm going to try to update this blog tomorrow (i.e., later today) after work and post a quick Saturday morning entry ahead of my departure with Gary. About that trip, Wendy isn't coming (grrr ...) but I get LP for five days. Count 'em: 1, 2, 3, 4, and 5. In Wendy's place, Gloria is going with us. I haven't had much dealings with her since this episode.
The weather is pleasant tonight with temps even here in the city around 70F and dew points around 57F, which is quite nice for August (or anytime in the summer months) in D.C. No rain is in the forecast for the next several days (we could use some). There is a tremendous amount of uncertainty with respect to a forecasted hurricane next week -- Erika -- that could brush / strike the Florida coastline.
The GFS runs are wildly inconsistent with the center of circulation doing odd to completely unrealistic things such as moving northwestward all the way to Chicago (last night's 0Z run), moving east-southeast for days back out over the Atlantic hundreds of miles north of the Greater Antilles (6Z run), lingering off the Southeast coast for days before almost executing a loop and striking Nova Scotia at hour 384 (the end of the run) (12Z), and moving west to Memphis (the 18Z run).
The latest run (12Z Aug. 28th) takes a diffuse circulation (not an actual tropical cyclone) and runs it ashore over Florida where it tries to enter the Gulf of Mexico near Tampa but instead just sort of peters out into nothing with showers and t-storms.
With the ginormous warm ENSO event underway, and possibly that warm phase PDO (that's more speculative), the Atlantic hurricane season is mostly a non-starter. (We are really starting to see manifestations of climate change. Humans and human civilization have pushed the climate system and ecosphere too far, and America's Know Nothing political and economic bullshit philosophies returning us to 19th Century Oligarchy and, eventually, medieval Feudalism can't do squat about it. All they can do is try to inflate some more financial bubbles for the oligarchical overclass in a time of worldwide deflationary economics and massive global excess everything.)
Speaking of hurricanes, we're at the 10th anniversary of the catastrophe and shameful national tragedy of Hurricane Katrina in terms of what was allowed to happen to New Orleans, and [refraining from political commentary, though it pains me to do so].
In lieu of that, please read this Jonathan Chait piece (the headline doesn't do it justice) (link embedded): Donald Trump Is Going to Lose Because He Is Crazy.
I'm still lovin' it -- and, unlike McDonald's crap, this is actually good for the Democratic Party and sanity.
OK, I'm signing off for now. Good night, Dear Reader.
--Regulus
Posted by Regulus at 1:27 AM