Let's get things off on a nice note ...
"Catalina Kiss" by Acoustic Alchemy from the group's Blue Chip release (1987)
I've featured four different songs by Acoustic Alchemy in my Jukebox Saturday Night and the earlier Friday Night Musical Interlude feature including "Angel of the South", "The Crossing", "Last Summer Song", and "The Panama Cat". (As of the posting of this entry, all four videos were still active.)
The long-time group Acoustic Alchemy seldom disappoints.
*******

"Careless Whisper" by Wham! from the duo's Make It Big album (1984)
I remember being somewhat perturbed by this song back when it came out in 1984 -- as opposed one of the other big hits on this trans-Atlantic chart-topping album, namely "Wake Me Up Before You Go-Go" -- because of the lyrics even more so the video.
Not sure why. 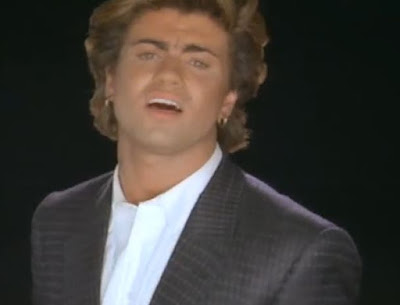 
Maybe it was George Michael himself -- at the time so young (well, not necessarily to a 14 year old) and wearing earrings like that suggestive of being gay -- while pretending in the video to be this rich straight playboy of a guy living a high life in Miami who is caught banging a pretty chick not his girlfriend when the girlfriend walks in on them -- back when I was just a weird, deeply neurotic, closeted gay teenager living in Glen Burnie, Md. 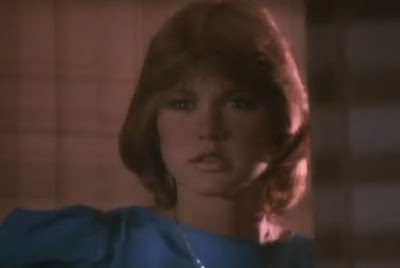 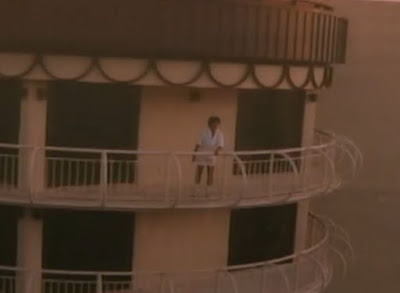 "Careless Whisper" video screenshot: George Michael on the top floor of Miami's Grove Towers.
Grove Towers still exist. Care to buy a condo there?
Oh, and Andrew Ridgeley, the other half of Wham! really doesn't appear in the video.
********


And let's end with something upbeat in a way that only Katy Perry can do ...
"Hot N Cold" by Katy Perry from her One of the Boys release (2008)
It's a vintage Katy Perry video spectacle.


OK, that's all for now. I'm in a bit of a hurry as Gary and I are going to do something a bit unusual this Saturday night and go up to College Park for a bit -- probably to the Cornerstone Grill. It's kind of a reverse Saturday night trip of the sort into D.C. that we did in the late 1990s when we lived in College Park (actually, he lived in Berwyn Height) and we would drive into D.C.
At least that's the plan -- always subject to change.
I had a very good gym workout this afternoon, so I feel happy about that.
I intend to post a short entry tomorrow early afternoon. Oh, yes, I should also mention that next weekend I will be away at the Jersey shore, so no jukebox Saturday night feature. However, I might try to post an old school Friday Night Musical Interlude in its place since I leave Saturday late morning.
--Regulus