"Dream On" by Christian Falk ft. Robyn from Falk's album People Say (2006)
Robyn is a strange woman but she is totally appropriate for singing this rough but beautiful song by the late Christian Falk (who died about a year ago from cancer). 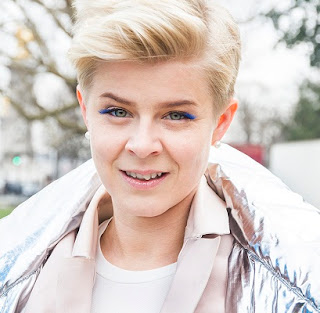 The video (or at least what is the second version) to the song is quite wonderful in how three situations -- all of which seem frightening or terrible -- actually turn out to be something totally different and, in two instances, something wonderful.


The scary black guy turns out to be a police officer. The crying woman, who you think was in some domestic violence situation in a bedroom, turns out to be overwhelmed by her boyfriend's marriage proposal. And the skinhead looking guy running wildly down a city street chasing a man lost in thought who looks like a rabbi actually is doing so to save that man from getting struck by a taxi (on E. 1st Street in lower Manhattan, based upon the street sign that is visible).
It makes me get teary.
(Just ignore the last 30 seconds -- that's just a filler advertising the arrival of the song.)
*******

And let's end with something a bit more upbeat ...

"Candyman" by Christina Aguilera from her Back to Basics double album release (2006)
The video has quite the World War II theme. It is quite risque with very suggestive lyrics and all Christina Aguilera's gyrations, some done while clad in a bikini. Oh, and yes, all three of those women -- the brunette, redhead, and platinum blonde -- are the very same Ms. Aguilera in what is a definite nod to The Andrew Sisters.
Next Saturday is the 70th anniversary of VJ Day. Maybe I should have waited to post this until then.
I'm in rush so I'm going to limit this edition to just two songs. Oh, and my other computer cannot even access the frickin' internet because Barracuda has completely blocked it (because somehow Barracuda can't remotely access the internet through wherever it is going).
--Regulus
Posted by Regulus at 9:34 PM