From the Seat of Empire, Late Night Copyedited Musings on the Donald Trump Phenomenon Whilst Eating Crème Fraîche & Quinoa 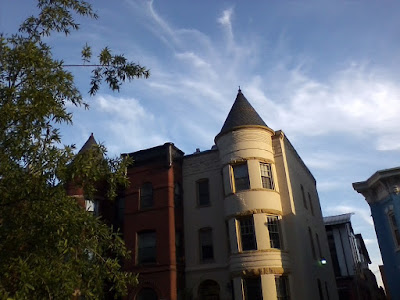 Row houses, 1300 block of W Street NW, Washington, D.C., 6:44PM August 15, 2015.
This is directly across the street from the YMCA Anthony Bowen. My former co-worker and friend Natan used to live in the corner house there. Natan continue to have quite the summer adventure on his cross-country hiking adventures chronicled here.
*******


I'm getting a typically ultra-late start on this blog entry, which (oh-by-golly) is going to curtail its length. I also have VERY few pictures for this entry. Indeed, I might have to jettison my week-long-planned, week-long-delayed Donald Trump related entry and instead just have an update.
What I'll do is start with an update and then perhaps, time permitting, segue into a Trump discussion, otherwise the latter will just have to wait again.
I had intended to update the blog last night -- per and following my previous entry -- but I was too tired and mildly drunk by the time I got home. To be clear, it was a happy inebriation. I walked from work to No. 9, where I had two drinks on the two-for-one special and then stopped by Floriana.
Jamie was not working but D. was bartending and it was characteristically hilarious and fun, especially when he put on some Donald Trump-related videos from Netflix including Trump arriving for jury duty the other day, Trump getting off his private jet recently, and a far-more-saner Trump being interviewed by Oprah (sorry, OPRAH!) many years ago (late 1980s, I think).
Oh, and then there was an interview of his bombshell wife, Melania, by some homely-looking female reporter (prompting one of the bar patrons -- a woman -- to ask a question his wife must have been thinking: "Why am I talking to you?" 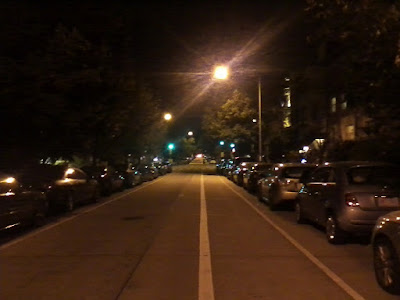 
D. also had this old Time Life series book on Washington, D.C., dated 1968 that included a basic civics lesson (in how the Federal government including Congress operated back then) and an overview of the city -- both Georgetown and its impoverished black sections.
What fascinated me is that Chapter 1 of the book was entitled "Seat of Empire" -- a term that I have used on a number of times on this blog as a pejorative for Washington, D.C., but in that context meant as a high compliment.
(In case you are wondering -- and I suspect you aren't -- I got the term "Seat of Empire" from a non-canonical Dune series timeline written by this guy who, I think, was friends with Frank Herbert but whose work was rejected by the son, Brian Herbert, who along with Kevin J. Anderson subsequently totally ruined the series with very low-quality, high-volume prequels and sequels. The term was applied to the "ancient" history of the human race on Earth discussing how the "Seat of Empire moves to Washington, D.C." or something like that.)
Anyway, I had a nice time there, and I might go back tomorrow night (a non-gym night and because I got my Metro reimbursement for June and July, so I'm not flat broke until Friday). 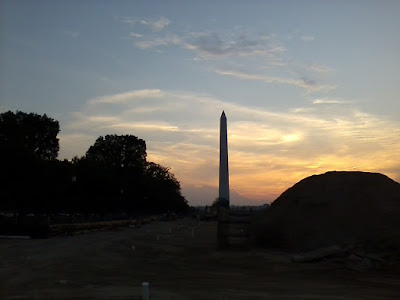 Dusk with the Washington Monument silhouetted on the sky and part of the National Mall fenced off and all torn up as part of its major restoration, Washington, D.C., 7:50PM August 17, 2015.
This Mall restoration project isn't anywhere near finished -- it runs through at least late 2016 / early 2017.
*******

Continuing with this update ...


I'm home now at this late hour, having made dinner and done two loads of laundry, and both after a gym workout.
I actually got in a 7 mile jog (because the treadmill I was on again just shut off about 6 minutes into the jog, and so I restarted and a whole hour plus 5 minute cool down on another one). However, I only had a mediocre weightlifting workout before going into the pool. Part of it is that I was (am) still a bit sore from my very good Sunday workout and part of it is I got distracted by a conversation with F. and then M. who joined in.
I don't think the incipit friendship between M. and me is going to work out.
I should point out that I've been more down and depressed the past few days than I realized and that sort of came through tonight, and in the case of M., his approach to my kvetching was to talk over me each time telling me his situation is worse. I kind of don't like or appreciate that. I don't do that to others.
Besides, he blew me off on a recent Saturday night (though I had a great time with Dave J. instead at Old Ebbitt Grill).
My work day was OK and I finished three new employee announcement write-ups (one of the sundry writing and communication-related tasks I do for the company when I'm not doing client-supporting work).
As for tomorrow, I am supposed to meet my mom at the Union Station Thunder Grill. I like that place (esp. the main level bar and restaurant area). It makes me happy. 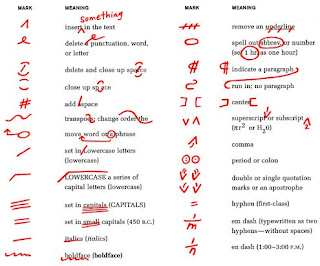 One last update item: I actually tweaked some of the content in my two previous entries -- here and here -- to correct some syntax and grammar issues. Once again, there were a number of them to fix.


This was the case despite the fact that I do writing/editing for a living. Why? well, you must understand, Dear Reader, that when I compose a particularly lengthy entry, by the time I get around to actually formatting and then posting it, I have lost the ability to copyedit it effectively. 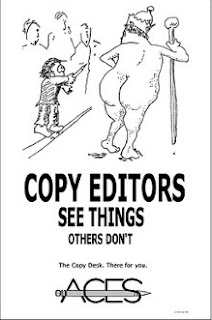 I am myself a good copyeditor -- indeed, it is one of the things I do for my job -- but it is hard to copyedit one's own work. I do it piecemeal after the fact. (I cringe when I go back and reread the entries and see some of the errors, esp. when I am trying to be nominally funny such as writing "an heavy smoking chicken with throat cancer" rather than "a heavy-smoking chicken with throat cancer," among others.) 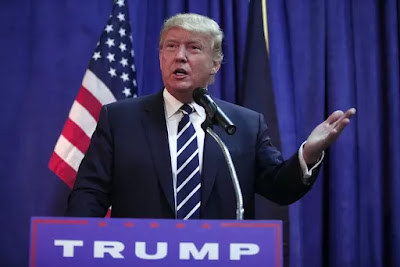 OK, I'm going to end the entry here rather than attempt to start (at 1:13AM as I write this sentence) a lengthy discussion about Donald Trump and the view (which I happen to like) that Trump as a candidate and phenomenon is actually a good thing for the Republican Party given its current abysmal and straitjacketed state in which candidates beholden to billionaire oligarchs and Fox News / talk radio have to believe and say shit that is so deluded, nutty, and without the slightest chance of doing anything except making society much worse off for virtually everyone not in the 0.1% overclass.
This view takes as an assumption that Trump -- underneath all the bluster, bravado, and egomania -- is actually by far the most moderate Republican of the whole clown car on a range of issues and he alone can do this. Both Ezra Klein (a journalist/pundit I normally can't stand because of his arrogance, cocksureness, and ultra-PC-style) and Josh Barro (who I do like and respect) have written about this. 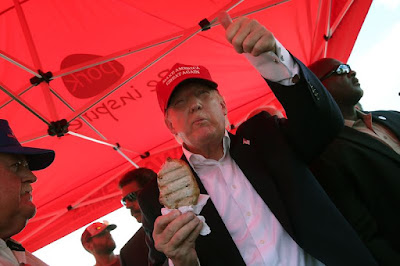 Donald Trump isn't afraid to eat a pork chop the real American way: with just his hands.
He does have a napkin at least. But it's not a French napkin.
*******


There are other views of the Trump phenomenon, what it means and why it is happening, and how liberals "should" respond to it, but I happen to like this and think it has some validity -- and explains Trump's 20 to 30 percent support. Still other views posit Trump's popularity as being due to his "authenticity" and his ability to say whatever (regardless the cause). It is definitely true -- regardless the reason -- that he does not need to kowtow to the 0.01% oligarchs and the Fox News Ministry of Truth, and that is a good thing FOR THE REPUBLICAN PARTY itself. 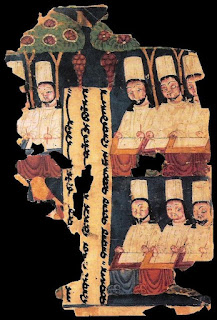 The view I cannot abide are the silly and hysterical Salon.com crowd of roaming politically correct thought police who are incapable of understanding the Trump phenomenon in any way (make no effort to do so) and actually prefer the media-entertainment-complex-enforced Red/Blue Manichean split of our politics in this time. I am reaching a point where I just can't read Salon.com anymore.

U.S. Capitol - Logan's Run
I actually was briefly involved in a group political-themed discussion (something I rarely do these days) involving Donald Trump earlier today (well, yesterday now), specifically, I posted my own views to a group email that Jake sent and then there were two responses from others cc'd to everyone. I would like to post one piece of one of those responses (from Dan). I don't know if Dan wrote this himself or got it from elsewhere but I kind of like it:
Masses (R): Fox News-watching middle Americans with low-mid range jobs that watch Nascar and drink Budweiser Original
Masses (D): Passport holding graduates of left-leaning public or liberal arts Universities who eat things like Quinoa and Crème Fraîche and are currently reading Jezebel and anything tagged with #BlackLivesMatter on Medium
Masses (F - frustrated): Those lost in a world where the choices are either be stupidly polarized or completely, fucking apathetic
Ha ha.


OK, that's all for now. I might update this entry with more pictures at a later time, not to mention copyedit it as needed.
G'night.