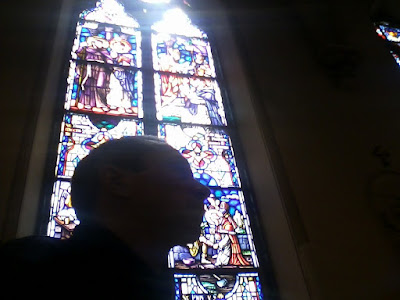 Yours truly in St. Dominic Catholic Church, SW Washington, D.C., 1:44PM August 21, 2015.
It's amazing this church survived the construction of I-395, and it only did because of heavy intervention by Congress.
I was on a lunch break and walked over to the church before going to the Subway on School Street (which I rarely do) and sitting in the lobby of the building where I worked back in 2002 (at 400 Virginia Avenue SW). There is a lovely fountain in the lower lobby.
******* 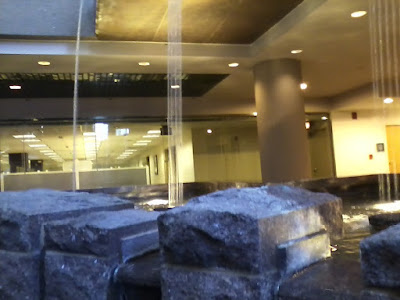 Fountain in the lobby of 400 Virginia Ave SW, Washington, D.C., 2:03PM August 21, 2015.
I worked in here for a time at the U.S. CLIVAR office, which was co-located with the old USGCRP. (Both then moved to 1717 Pennsylvania Avenue NW, and I would walk to work.) I know that one shouldn't talk badly about past jobs, but that one (a two-man operation) was so badly ill-suited for me. I could probably make it work better now but still, it would be difficult.
*******


I'm home tonight after a post-work gym workout that was OK, I guess, but nothing great. I got in the usual multiple parts (hour jog, hour light-to-moderate weightlifting, a bit of core stuff, and a brief swim). I came home and made dinner and now I'm trying to post this blog entry.
There are four main points I want to address in this entry ...
First, as a follow-up to the ending of my my previous post, namely, a general request to the Universe that it rain, well, I'm happy to say it was answered ... 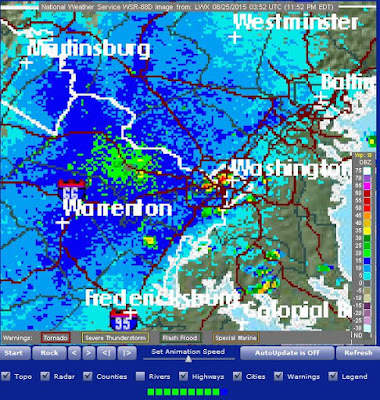 
There were showers and thunderstorms that crossed the Baltimore/Washington region tonight associated with an August cold frontal passage that dropped more rainfall than I had hoped for in a number of places including the following amounts (based upon the hourly observations). 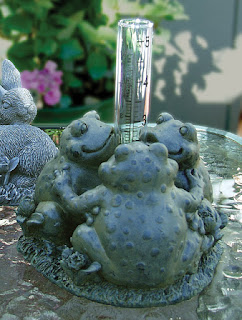 It is still mostly cloudy right now as I write this, the radar shows there is a stray developing rain shower crossing from Arlington into Georgetown -- and, indeed, I just looked out the window from my 5th floor apartment and wanly illuminated in the soft darkness off to the west southwest is a large cloud bank that is likely dropping rainfall (no lightning). 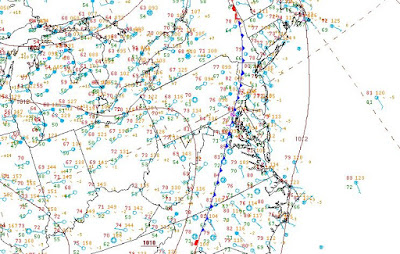 
And, whaddaya know, it's starting to rain outside. SCIENCE!
Indeed, it briefly was deluging outside (Dupont Circle and Shaw) for a bit as I wrote this entry. Looking at the (composite mode) radar, I think KDCA has missed out out on this, so the 0.41" will probably be its tally.
This rain is good and now the more pleasant weather to follow for the rest of the week can be better enjoyed.
Of weather note, this Monday featured quite a bit of rain across the Hawaiian Islands thanks to a deep plume of tropical moisture indirectly associated with two tropical disturbances in that general part of the Pacific ... 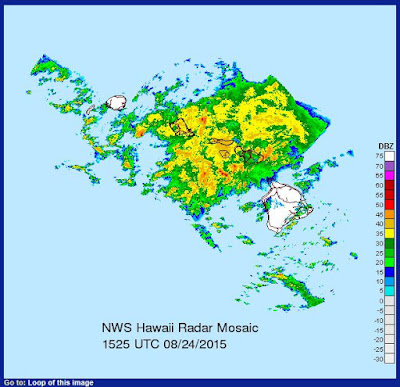 
Secondly, related to that previous post, I do need to clarify a two points. I've already made the corrections to the text, but it's probably better that I specifically mention them in this entry.
First, I meant to say "12th Street NE" not "12th Street NW" -- obviously, the former is in the Brookland section of D.C., not the latter. Secondly, I added to my description of Upshur Street in Mount Rainier, Md., to state the following:
Back then, Upshur Street in Mt. Rainier had these old-style mercury vapor lamps except for ONE hybrid mercury-and-sodium vapor lamp that created this pool of iridescent orange light that was partially engulfed by a leafy tree. And I once had a minor bike mishap, falling off the bike (except that was about a couple blocks to the east in Brentwood). A car went by and honked its horn. (I think it was Upshur Street. It could have been another alphabet one -- perhaps I'm remembering it wrong.)
******* 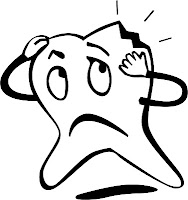 Thirdly, I think I need to go to the dentist quickly. It has been a long time, anyway, but this particular issue involves a possible cavity in #4 #13. I may just go to the office tomorrow morning and see if I can make an appointment for this week.


Lastly, I have been remiss in not noting that my friend Damon's wife had a second child, a baby girl. They already have a young son. Congratulations to them. Damon's blog is here. He still is numbering the entries consecutively even though the original motivation for the blog -- and the whole "Crocodile DG" name -- was for a stint in Australia that ended at least three years ago.
I'm going to end this entry here since it is far too late for me to post the UMCP/College Park I took on Sunday in a dedicated entry.
--Regulus
Posted by Regulus at 1:46 AM