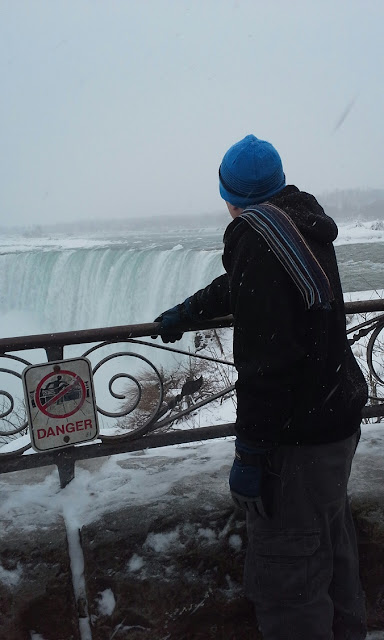 Yours truly at Niagara Falls on the Canadian side on a bitterly cold and snowy day , January 26, 2014.
The picture(s) from my Niagara Falls side trip to the Buffalo trip in Jan. 2014 seem appropriate for this entry ...
*******


I really must note the astonishing heat that has been afflicting parts of the Middle East including heat indices approaching all-time world records including 165F (74C) recorded in one Iranian City on the Persian Gulf and interior desert air temperatures climbing to 122F (50C) in Baghdad, Iraq.
The information in this entry including the images come from these two Capital Weather Gang entries (links embedded in titles):
Iran city hits suffocating heat index of 165 degrees, near world record
Iran’s heat index is literally off the charts, and this is what it feels like 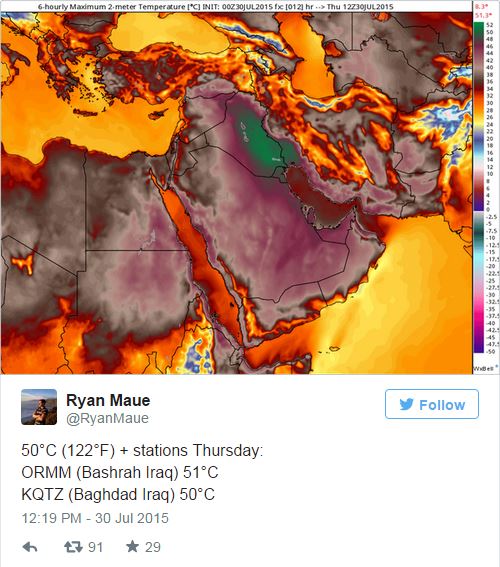 
While summertime extreme heat in the Middle East is hardly news, this particular heat wave is noteworthy both for just how high the temperatures have reached and the freakishly high dew points -- about 90F (32C) -- along the Persian Gulf. Given the lack of protective infrastructure (e.g., access to adequate fresh drinking water, home air conditioning, etc.) in some of these places, the heat can often be lethal. 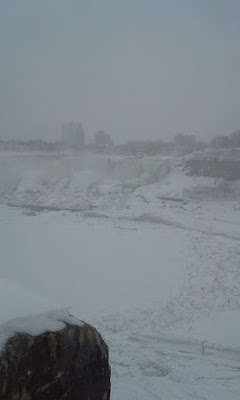 To be clear, the 90F dew points basically reflect the low-to-mid 90s Fahrenheit urface water temperatures of the Persian Gulf, but in this situation, owing to the direction wind and other favorable boundary-layer atmospheric conditions, enough water vapor evaporated into the air along the coast to achieve these dew points. The result were heat indices that climbed to lethal levels including 165F (74F) on Friday in Bandar Mahshahr.

How is that possible?


As the first CWG entry states: To achieve the astronomical heat index level of 165F, Bandar Mahshahr’s actual air temperature registered 115F degrees (46C) with an astonishing dew point temperature of 90F (32C).
(By the way, the idiots on our local Channel 8 station had a crawler yesterday evening stating that the (air) temperature had reached 165F in Iran.) 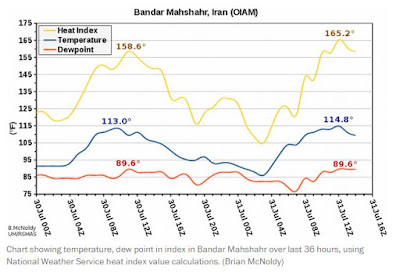 
The same CWG entry notes that there aren't official heat index records in most places. According to weather historian Christopher Burt in his book Extreme Weather (cited in that entry), the highest "unofficial" heat index ever recorded was on July 8, 2003 in Dhahran, Saudi Arabia where a 108F (42C) air temp. combined with a dew point of 95F (35C) to produce a heat index of 178F (81C).
The second CWG entry notes that such heat indices are really only crude estimates because the NWS heat chart constructed in 1979 simply does not go that high. 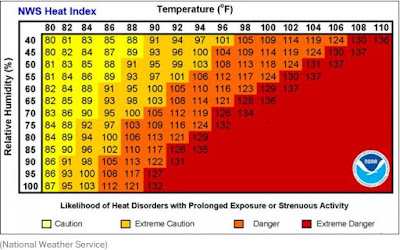 
The numbers just don't make sense -- are "not valid" -- precisely because the heat index is how a combination of temperature and dew point "feels" on the human body, and in those extreme conditions, that just can't be accurately assessed because it is just, well, lethal.
If you are curious, the Heat Index Equation is available here in all its weirdness. And you can plug in different numbers to see what you get with this Heat Index Calculator.
For reference, the highest dew point ever recorded at National Airport -- i.e., officially for Washington, D.C. -- reportedly was 83.3F (28.5C) on June 25, 1949 (I'm not sure what the air temp. was at that time).
However, 80F+ dew points high been reached on multiple occasions including most recently, 80.1F (26.7C) on July 18, 2013. (I noted that occurrence in this blog entry, although I gave the number as 80F.) A better way to reckon this is to take the average daily dew points rather than a single measurement. Through 2013, the top 10 at KDCA are as follows: 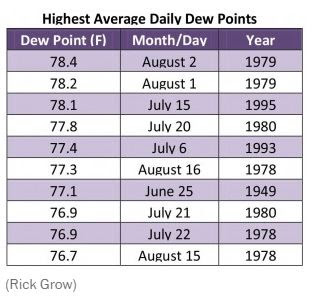 Now, please, I'm imploring you, nobody "conclude" that "global warming is fake" (and Obama is a Muslim Kenyan Socialist) because the top 10 highest KDCA average daily dew points do not include any in the 2000s.
Just for reference, a typical steam room has about a 105F (41C) temperature but the relative humidity is basically 100% (i.e., the dew point is about 105F (41C) as well. Again, the notional heat index is simply "not valid" but the Heat Index Calculator gives a number of 234F (115C).
I don't even want to think about that but that explains why I can only handle about 4 minutes tops in the steam room at the YMCA.
By the way, right now outside it is about 85F with a 612 dew point so the heat index is 86F. Typical mid-summer stuff. 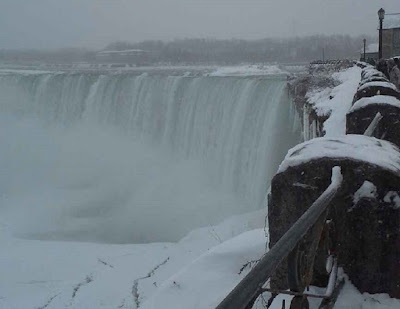 Horseshoe Falls, Niagara Falls in the snow and ice of a bitterly cold winter, Jan. 26, 2014.
The power of Niagara even on a day such as that one when it was partially frozen is astonishing -- all those billions of gallons per hour pouring over the Niagara Escarpment.
I love the word escarpment.