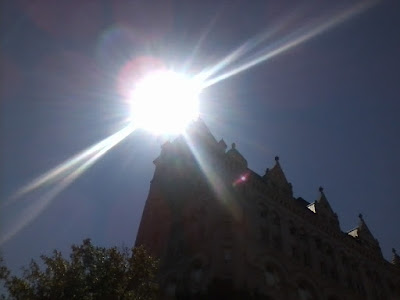 The dazzling Sun and the Old Post Office Tower, Washington, D.C., 10:57AM July 22, 2015.
This building is soon to be the Trump International Hotel. Yes, that Trump.
It was just too damn sunny yesterday although the weather was far more pleasant with much lower dew points (around 55F). The high reached 89F at KDCA. A cold front passed through the night before but it was dry. We seemed to have abruptly shifted from a very wet to totally dry pattern. July could even end up below normal on precipitation at the airports.
*******


Apologies for lack of update last night. It was just too late and I was too tired by the time I got home after stopping (in the following order): Baan Thai, No. 9, and Stoney's.
Tonight should just be a gym night so I should be able to update the blog afterward. The only caveat is that my computer is to be "reimaged" today and I'm not sure how that will play out. 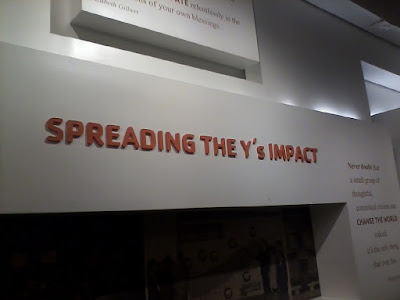 One of the wall message at the YMCA Anthony Bowen, Washington, D.C., 10:41PM July 21, 2015.
This message is one of a series of inspirational quotes and messages at this gym (I like the Thurgood Marshall one about no one ever getting ahead without the help of someones else: It gets "Ivy League crony" and "nuns" in the same sentence.)
Obviously, it reads "Spreading the Y's Impact", but when I look at it quickly, I can't help but think it says "Spreading They's Impact" ...
*******


It was supposed to happen on Tuesday but because I have so many pictures (to the tune of about 16,700 in 16,200 subfolders totaling 2.6GB), the IT person was reluctant to go ahead and delete all of them. (Actually, the whole thing was a bit embarrassing and I saw him (while he was seated at my desk) rooting around in my picture folders including, oddly enough, the Angela Merkel one ... 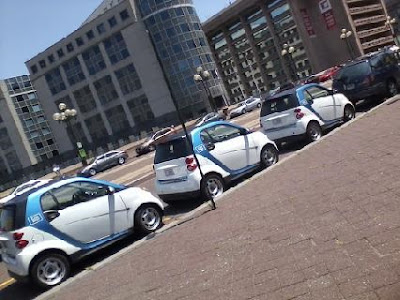 
Anyway, I was able to purchase a 16GB USB flash drive from the Radio Shack near Metro Center yesterday after work (I biked to and from work) and I can move them later this morning.
If I do update the blog tonight, I am unsure whether to post a whole series of pictures stretching back to earlier this month that I've been meaning to post or the New Horizons Pluto pictures. I'm really remiss in doing that.
OK, that's all for now except to note that Explorer was refusing to allow me to upload pictures to Blogger so I used Chrome instead, which worked. Not sure what that's about.
--Regulus
Posted by Regulus at 9:34 AM