Some Pictures of and Thoughts on D.C.'s Very Own "Eiffel Tower," the Hughes Memorial Tower, and a Brief Morning Update 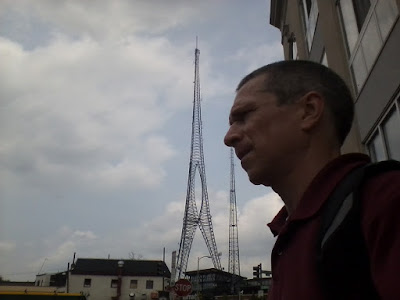 Yours truly in the 5800 block of Colorado Avenue NW near the intersection of Georgia Avenue and Missouri Avenue NW with the ginormous Hughes Memorial Tower and its smaller transmission tower companion nearby, Washington, D.C., 1:59PM July 5, 2015.
The smaller tower (which I don't think has a name) looks like it is poking up my nose.
I biked up to the (still-sketchy) Brightwood section of D.C. to visit Miss Wendy (and Tacoma) in her (they're) nice apartment (so much better than the previous Columbia Heights one). In the above picture, you can see the sign for the new Walmart (just above the stop sign from this vantage point). 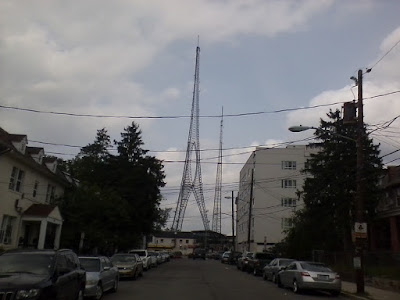 
The Hughes Memorial Tower (I don't know why it's called that) is a free-standing three-legged star tower that is located on the grounds of the D.C. Metropolitan Police Department 4th precinct station, technically just off Peabody Street (3-syllable P-street in the D.C. grid, NW section, east of Rock Creek Park). Though nominally blocked off, it would be remarkably easy and profoundly foolish and dangerous to climb it.
Here is the Wikipedia page on this radio transmission tower (link embedded): Hughes Memorial Tower.
Of note, the last paragraph in that Wikipedia article (starting with "The tower is located on a relatively high spot just off Georgia Avenue, NW ...") was actually written by yours truly about six years ago, and it has remained unedited the entire time.
I have written and posted pictures of the Hughes Memorial "Eiffel" Tower many times over the years on this blog. The Wikipedia article states that it is 761 feet high (I estimated it at 800 feet) and the largest (tallest) structure in the entire Baltimore/Washington area (and over 200 feet higher than the Washington Monument).
To be clear, the tower's height doesn't violate the building height restriction in D.C. since that doesn't apply. 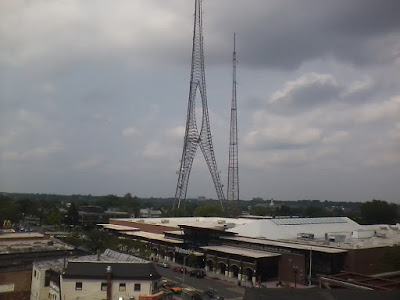 The Hughes Memorial Tower and its companion along with a rooftop view to the northeast from the corner of Colorado and Missouri Avenues NW, Washington, D.C., 2:32PM July 5, 2015.
Yes, D.C. proper has a Walmart. In fact, there are at least two (maybe three).
It was very hazy on Sunday. I actually think there was high-level smoke in the air again from forest fires burning over parts of Canada. Nevertheless, from the rooftop, you could see most of the prominent structures in the D.C. area including the (still scaffolding-encased) Capitol dome and Washington Monument.
******


The top "elevation" of the Hughes Memorial Tower as shown on aeronautical charts is 1,049-feet mean sea level (MSL). This includes the elevation of the land on which it is located. The 1,049' MSL figure is also the elevation of at least two of the series of other transmission towers clustered together several miles to the west in upper Northwest (probably the channel 4 WRC and channel 7 WJLA towers), but the Hughes one looks the most dramatic. (The 1,049' figure probably is the top of some navigational regulation.)
The tower was built in 1989. It has a daytime strobe light mode and a nighttime red winking navigational mode, except the red lights are actually LEDs and all blink in unison. At one time, it used to have the regular (incandescent) flashing red lights at night that blinked in a really cool synchronized way that went "up" the tower from bottom to top.
I suspect from the top of it on a clear day, you can see all the way to Baltimore and the Chesapeake Bay.
The tower is as big as Mattie Wade's tiresome ego but genuinely more impressive. Just sayin'...
*******


Sorry for the lack of an update last night.
I went to No. 9 after work -- well, actually, I first went to Baan Thai upstairs restaurant back bar for a bit of dinner and then to No. 9 -- where I met Milan and Gary and, unexpectedly, Howie and his friend, and didn't get home until about 1130PM, by which point I just had to go to bed.
I'm still tired and groggy this morning. I also think I might have a minor cold.
I'm going to try to go to the gym tonight (it's definitely not a post-work drinking night), and then post an update. There are at least three topics I want to post including (1) the remaining pictures from my July 4th holiday (already quickly receding into the past); (2) my Wendy and Tacoma visit and subsequent bike ride pictures on Sunday (although I already posted some of those pictures in the first part to this entry); and (3) a number of Paul Krugman links on the Greek debt crisis.
I also would like to post a weather-themed entry and any New Horizons update (now just 6 days from Pluto!).
OK, that's all for now.