Saturday Evening Post for July 11th, 2015: A Brief Update to Briefly Update Any of My Readers 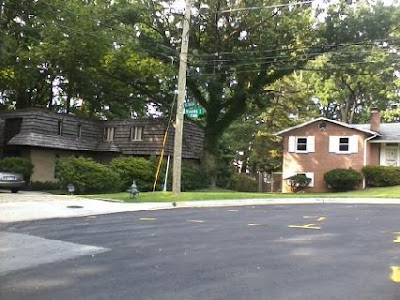 
These are the two most northerly houses in the District of Columbia. Indeed, 8500 East Beach Drive is the highest numbered address in all of Washington, D.C., while Verbena Street is the very top of the fourth or floral alphabet. (The numbers and names don't go that "high" heading south.) The North Cornerstone of the District of Columbia is behind these two houses (outside their property lines) just off East-West Highway.
*******


This is the briefest update intended to say that I can't post an update and with only the lead image.
To be clear, I would do so, especially since I haven't had a personal update-themed entry since Wednesday morning (itself a brief one), and I still need to post some remaining pictures from my July 4th holiday weekend.
However, I would like to use the $50 McCormick & Schmick's gift card that I won last month at the little country club affair up in Ijamsville, Md., for correctly guessing the year the Department of Energy was founded (1977). There is a McCormick & Schmick's down on K Street NW and it serves until 10PM. I'd like to get there by 930PM. I'll sit at the bar.
I will say that I had a good gym workout this afternoon including jogging, weightlifting, and a brief swim. Of note my foot issues with the jogging seem to have ebbed, esp. since I reduced the treadmill incline, though I probably still have to go to the podiatrist.
The workout (eventually) cured me of a terrible hangover this morning incurred by going to three places last night: Larry's Lounge, No. 9, and Nellie's and imbibing a grand total of, I estimate, 8 vodka sodas, maybe 9.
By the way, Nellie's was not insanely mobbed with annoying straight people last night and was actually enjoyable. Cole showed me pictures of his new restaurant he is having built and opening in Fredericksburg.

As for Derek, he is probably one of most in-shape guys I know: His upper body is actually chiseled. (The bartenders are sometimes shirtless upstairs. It IS a gay bar.) Given his height (about 6'3"), this is even more impressive since guys like that tend toward lankiness. He is also very good looking Not only does he qualify as a stud, but he's a nice guy.
Anyway, I don't want to post an update right now but instead my jukebox Saturday night entry is to follow shortly.
As for tomorrow, I plan to take a bike ride, although I might meet up with DD in Rockville on an article idea he has (and, oddly enough, on a topic that was actually the source of an argument I had at Larry's Lounge last November).
I suggested meeting at the bar at Gordon Biersch but I haven't heard back from him. Either way, I'll take a bike ride -- probably on the Rock Creek Trail to Georgetown Branch Trail as I did early last month.
Looking ahead to next week, it will be a busy week as I have two DOE / EERE assignments including a big editing one and covering for someone who puts together a daily (M-F) email news distribution list for one of the technology offices. This is in addition to any company work that arises (usually, press releases or editing proposals).
That might eat into blogging time next week since my only time to post entries is in the wee hours and that might not be feasible next week. I know I say that a lot but this time I mean it. Of course, there is the New Horizons flyby of Pluto set for Tuesday -- and, as I promised and have been doing already, I will find a way to post updates and images of that.
OK, jukebox entry to follow ...