NEW HORIZONS UPDATE! Pluto Revealing a Complex and Wonderful Surface Geology as Charon Becomes a World In Its Own Right 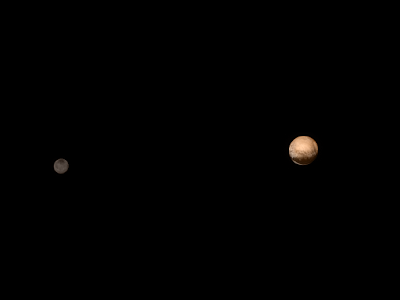 Pluto (right) and Charon (left) as seen from approximately 3.7 million miles (6 million km) distance by New Horizons' LORRI instrument, July 8, 2015.
Most of the bright features around Pluto's edge are a result of image processing, but the bright sliver below the dark "whale," which is also visible in unprocessed images, is real. Color information obtained earlier in the mission from the Ralph instrument has been added.
Caption adapted from Here and here.
******* 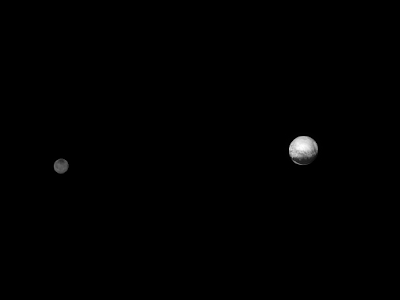 
This entry contains more Pluto - Charon pictures courtesy our awesome and wonderful little New Horizons space probe, NOW JUST THREE DAYS FROM ITS HISTORIC RENDEZVOUS! In particular, it features some of the recent images taken by New Horizons' array of cameras and instruments including those "hybrid" LORRI images colorized with Ralph data. 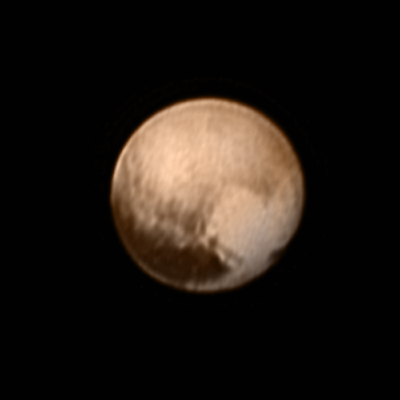 
They're a fascinating pair: Two icy worlds, spinning around their common center of gravity like a pair of figure skaters clasping hands. Scientists believe they were shaped by a cosmic collision billions of years ago, and yet, in many ways, they seem more like strangers than siblings.
A high-contrast array of bright and dark features covers Pluto's surface, while on Charon, only a dark polar region interrupts a generally more uniform light gray terrain. The reddish materials that color Pluto are absent on Charon. Pluto has a significant atmosphere; Charon does not. On Pluto, exotic ices like frozen nitrogen, methane, and carbon monoxide have been found, while Charon's surface is made of frozen water and ammonia compounds. The interior of Pluto is mostly rock, while Charon contains equal measures of rock and water ice.
"These two objects have been together for billions of years, in the same orbit, but they are totally different," said Principal Investigator Alan Stern of the Southwest Research Institute (SwRI), Boulder, Colorado.
Charon is about 750 miles (1200 kilometers) across, about half the diameter of Pluto -- making it the solar system's largest moon relative to its planet. Its smaller size and lower surface contrast have made it harder for New Horizons to capture its surface features from afar, but the latest, closer images of Charon's surface show intriguing fine details.
Newly revealed are brighter areas on Charon that members of the mission's Geology, Geophysics and Imaging team (GGI) suspect might be impact craters. If so, the scientists would put them to good use. "If we see impact craters on Charon, it will help us see what's hidden beneath the surface," said GGI leader Jeff Moore of NASA's Ames Research Center. "Large craters can excavate material from several miles down and reveal the composition of the interior."
In short, said GGI deputy team leader John Spencer of SwRI, "Charon is now emerging as its own world. Its personality is beginning to really reveal itself."
******* 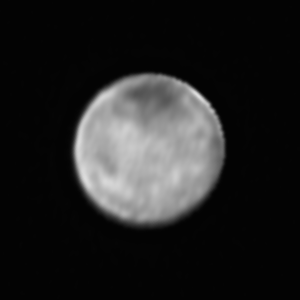 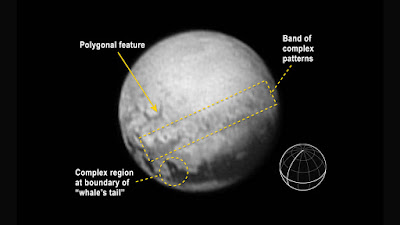 Annotated text version describing the geological features seen on Pluto by the LORRI instrument aboard New Horizons from a distance of 3.3 million miles (5.4 million kilometers) on July 9, 2015. Source here.
*******


I'm going to try to capture the exact second the countdown clock reaches Time Zero (or maybe with just 1 second to go). Time zero -- the closest approach occurs at:
7:49:57AM EDT July 14, 2015
Remember that. Watch it happen.


Oh, and here is a great piece by Joel Achenbach of The WaHoPo on last week's borderline-horrifying New Horizons probe communications "anomaly" (link embedded):
The inside story of New Horizons' 'Apollo 13' moment on its way to Pluto. 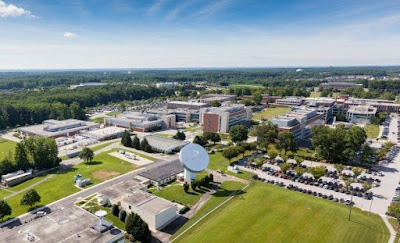