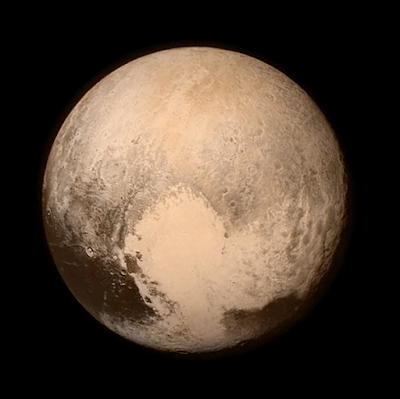 The Heart of Pluto -- Close Up!
OK, I said wasn't going to post anything new until tonight but I just have to post this new much higher-resolution picture above taken on July 13th that appeared on the NASA New Horizons twitter feed. (There actually appears to be a second twitter feed as well). It's a stunning color photo of Pluto although I don't know which instrument(s) took it (I assume LORRI and "Ralph" were involved). 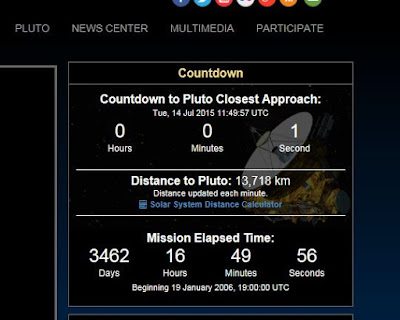 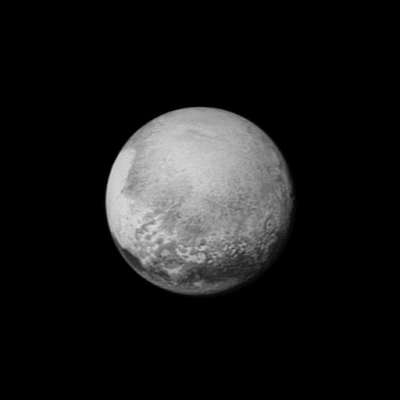 Caption: Pluto's bright, mysterious "heart" is rotating into view, ready for its close-up on close approach, in this image taken by New Horizons on July 12 from a distance of 1.6 million miles (2.5 million kilometers). It is the target of the highest-resolution images that will be taken during the spacecraft’s closest approach to Pluto on July 14. The intriguing "bulls-eye" feature at right is rotating out of view, and will not be seen in greater detail. Source here.
It turns out that Pluto is the largest by volume known Kuiper Belt object after all (although not the most massive -- to date, that distinction belongs to Eris) with a diameter estimated at 1,473 miles (plus or minus a tiny bit). The New Horizons mission operations news release is linked here.


So later today -- July 14th, 2015 -- is the LONG AWAITED day of our awesome, intrepid, wonderful space probe New Horizons' rapid fly-by of Pluto and its system of moons.

The precise moment that New Horizons is closest to Pluto is 7:49:57AM EDT (11:49:57 UTC) when it will pass just about 7,800 miles above this strange and wonderful "dwarf planet" world with its retinue of mini-moons including the largest, Charon. The media coverage is really building -- and we even have an animated Google Doodle for today to mark the event (see above). 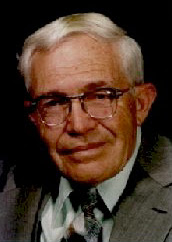 A bit of the ashes of Pluto's discoverer, the late Clyde Tombaugh (pictured left), is on board.

However, it turns out that New Horizons will be going silent starting just about now as it performs a series of carefully choreographed moves and the outcome is not foreordained. Only if everything goes according to plan will the really high-resolution pictures start coming in late Tuesday. 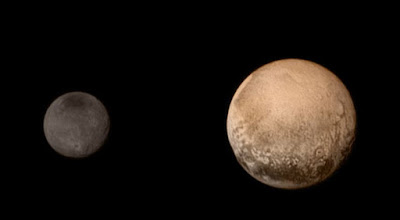 
Here is the New York Times explanation followed by Joel Achenbach's WaHoPo piece:
At 11:17 p.m. [EDT] Monday, the spacecraft, by design, was to stop talking to Earth and start almost 22 hours of programmed choreography, repeatedly firing its thrusters to pivot among Pluto, Charon and four smaller moons, taking a multitude of measurements.
After the closest approach to Pluto, the trajectory is to pass through the shadows of both Pluto and Charon, which will enable additional measurements. A 70-meter radio dish in California will send a powerful signal toward Pluto. The signal will bend around Pluto, and then Charon, to the receiver on the spacecraft, providing information about Pluto's atmosphere.
For those 22 hours, no one will know the fate of New Horizons. There is a chance -- tiny, but greater than zero -- that New Horizons could run into something as small as a pebble and come to a catastrophic end.
If it does not, the spacecraft will turn its antenna back toward Earth around 4:20 p.m. to send a message that it survived and a brief summary of how the day went. Four and a half hours later, the time it takes light to travel three billion miles, the message will arrive at mission control, around 8:53 p.m. "That's going to be a very highly anticipated event," [New Horizons Mission Principal Investigator] Dr. [ Alan] Stern said. "I think we're all going to breathe a final sigh of relief at 9 p.m."
******* 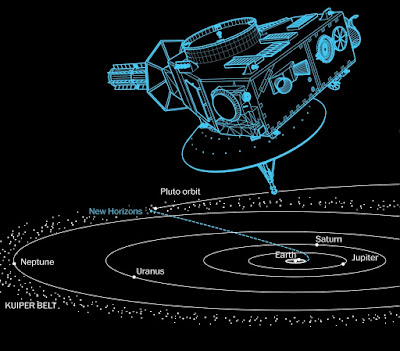 Schematic diagram of New Horizons and its course from Earth across the Solar System to Pluto.
*******


Joel Achenbach piece (link embedded): New Horizons is just hours away from Pluto after 9½-year journey.
Excerpt: "Because Pluto is about 3 billion miles from Earth, New Horizons can't be joysticked from mission operations at [the Applied Physics Laboratory] APL. The nine-hour round-trip communication time means the spacecraft has to function autonomously. [New Horizons team member Cathy] Olkin said the probe must make about 600 maneuvers over a nine-day period that started last Tuesday; that will enable 433 separate observations."
So we are just going to have to wait.


I'm not even going to post anything about this topic again until there is some confirmation of where things stand.
Oh, I forgot to mention: The New Horizons Pluto encounter is occurring 50 years to the day after the first-ever planetary probe flyby of Mars by Mariner 4. 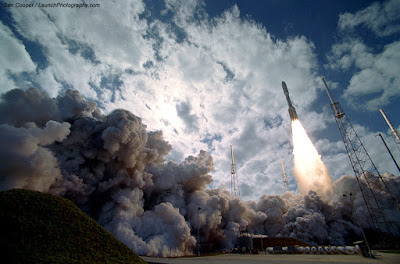 
This is it, little one ... We're with you as much as we can be and sending your way every bit of positive human mental and spiritual energy that we can across that 3-billion mile gulf.
Please, God, let this work.