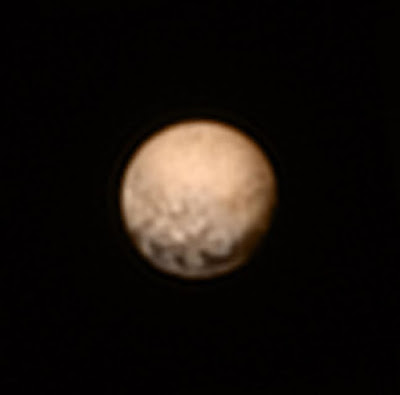 PLUTO! YES, THIS IS PLUTO!
(Don't fret none: The images are only going to get better between now and July 14th!)
The New Horizons mission control page caption reads: This color version of a New Horizons Long Range Reconnaissance Imager (LORRI) picture of Pluto taken July 3, 2015, was created by adding color data from the Ralph instrument gathered earlier in the mission. The LORRI image was taken from a range of 7.8 million miles (12.5 million km), with a central longitude of 19°.
Credit: NASA/Johns Hopkins University Applied Physics Laboratory/Southwest Research Institute
Source here.


Well, I started an entry on a particular topic tonight, but I've since thought better of it (long story on a uniquely and endless touchy American topic, and in the end, nothing really to relate other than a fear and a different walk route home from the gym tonight), and so I'm not going to post that. However, I spent nearly an hour on it, and now I'm just too tired and it's too late to start a new entry.
I should have stuck with my original entry plan: Paul Krugman's op-ed and recent blog postings on Greece and the decisive "NO" vote to endless "troika" demands of self-defeating austerity and mass suffering and, instead, strike out into a great unknown fraught with dangerous risks (but still far better than the failed neoliberal "European project" of deflation and depression for the sake of northern European overclass oligarchs and their German banksters).
In lieu of any of that, I'm just going to post some Pluto pictures -- including the one shown as the lead image to this entry -- courtesy our awesome, wonderful, and ever-so-brave little space probe, New Horizons. These images were taken just before the "scary" July 4th communications glitch that apparently has been resolved and the probe is due to start collecting data again later today (July 7th). 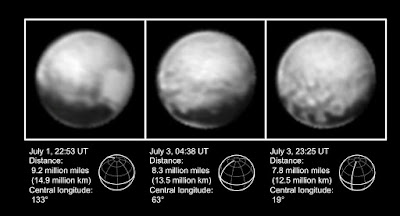 New Horizons LORRI three-image sequence of Pluto taken on July 1st and 3rd, 2015 along with explanations. Click on image for larger version.
*******


Here is a nice synopsis by The Planetary Society's Emily Lakdawalla of what happened, why, how it was corrected, and why it shouldn't happen again (link embedded): New Horizons "back in action" after safe mode event, ready to resume encounter science. 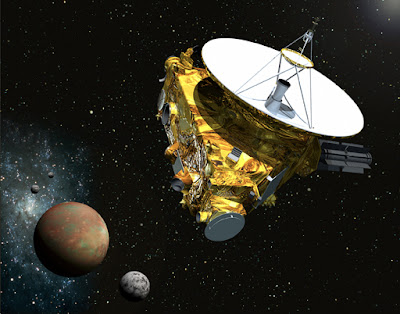 Everything is going to be alright and we love you.


PLUTO, GET READY!! (And I just know you'll be nice to this little visitor.)
--Regulus