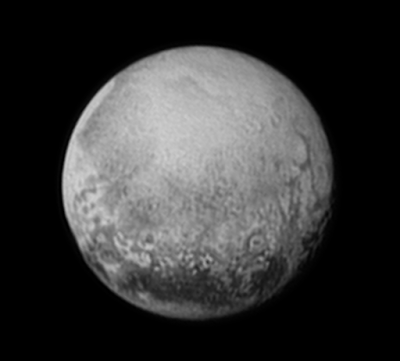 Pluto as seen by the New Horizons probe, July 11, 2015. Source here.
I assume this image as well as the ones below were all taken by LORRI, but the captions don't specifically indicate this. We now know that Pluto has a sort of reddish-ruddy-brown hue.
*******

One Million Miles to Go; Pluto is More Intriguing than Ever
Source here


As NASA's unmanned New Horizons spacecraft speeds closer to a historic July 14 Pluto flyby, it's continuing to multi-task, producing images of an icy world that's growing more fascinating and complex every day.
On July 11, 2015, New Horizons captured this image, which suggests some new features that are of keen interest to the Geology, Geophysics and Imaging (GGI) team now assembled at the Johns Hopkins University Applied Physics Lab in Laurel, Maryland. For the first time on Pluto, this view reveals linear features that may be cliffs, as well as a circular feature that could be an impact crater. Just starting to rotate into view on the left side of the image is the bright heart-shaped feature that will be seen in more detail during New Horizons' closest approach. 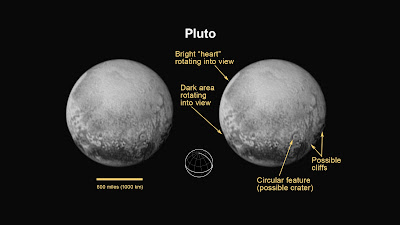 Caption: On July 11, 2015, New Horizons captured a world that is growing more fascinating by the day. For the first time on Pluto, this view reveals linear features that may be cliffs, as well as a circular feature that could be an impact crater. Rotating into view is the bright heart-shaped feature that will be seen in more detail during New Horizons' closest approach on July 14. The annotated version includes a diagram indicating Pluto's north pole, equator, and central meridian. Source here.
*******


The New Horizons spacecraft is now approaching a milestone -- only one million miles to Pluto -- which will occur at 11:23 p.m. EDT tonight, Sunday, July 12. It's approaching Pluto after a more than nine-year, three-billion mile journey. At 7:49 AM EDT on Tuesday, July 14 the unmanned spacecraft will zip past Pluto at 30,800 miles per hour (49,600 kilometers per hour), with a suite of seven science instruments busily gathering data. The mission will complete the initial reconnaissance of the solar system with the first-ever look at the icy dwarf planet.
Follow the path of the spacecraft in coming days in real time with a visualization of the actual trajectory data, using NASA's online Eyes on Pluto.
Stay in touch with the New Horizons mission with #PlutoFlyby and on Facebook at: https://www.facebook.com/new.horizons1
******* 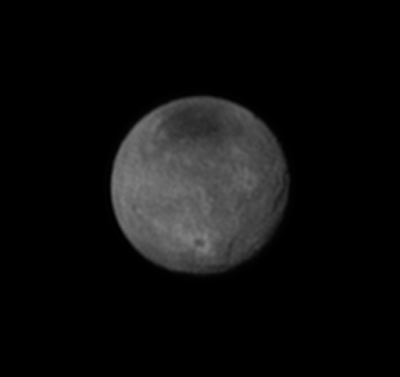 
New Horizons' newest images reveal Pluto's largest moon Charon to be a world of chasms and craters. The most pronounced chasm, which lies in the southern hemisphere, is longer and miles deeper than Earth's Grand Canyon, according to William McKinnon, deputy lead scientist with New Horizon's Geology and Geophysics investigation team.
"This is the first clear evidence of faulting and surface disruption on Charon," says McKinnon, who is based at the Washington University in St. Louis. "New Horizons has transformed our view of this distant moon from a nearly featureless ball of ice to a world displaying all kinds of geologic activity."
The most prominent crater, which lies near the south pole of Charon in an image taken July 11 and radioed to Earth today, is about 60 miles across. The brightness of the rays of material blasted out of the crater suggest it formed relatively recently in geologic terms, during a collision with a small Kuiper Belt Object (KBO) some time in the last billion years. 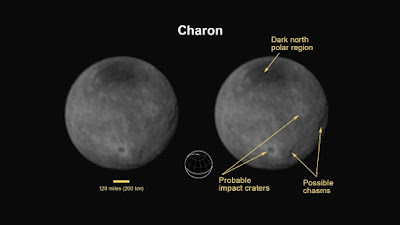 
The darkness of the crater's floor is especially intriguing, says McKinnon. One explanation is that the crater has exposed a different type of icy material than the more reflective ices that lie on the surface. Another possibility is that the ice in the crater floor is the same material as its surroundings but has a larger ice grain size, which reflects less sunlight. In this scenario, the impactor that gouged the crater melted the ice in the crater floor, which then refroze into larger grains.
A mysterious dark region near Charon's north pole stretches for 200 miles. More detailed images that New Horizons will take around the time of closest approach to the moon on July 14 may provide hints about the dark region's origin.
*******


We love the Pluto system and we love New Horizons!
--Regulus
Posted by Regulus at 11:58 PM