This is an awesome animated GIF released by NASA showing Pluto and Charon getting larger and more detailed as New Horizons draws closer.
NASA released another version of this video on June 30, 2015 with dates, distances, and other information superimposed on the images. These reveal the time-lapse was taken between May 28, 2015 and June 25, 2015 in roughly 6 hour intervals with the distance closing from 56.07 million km to 22.06 million km.
Conveniently, NASA also posted it on YouTube:
YouTube embedded clip of the same nearly one-month time lapse approach -- with each image approximately 6 hours apart -- along with other information.
To be clear, this is a "Plutocentric" set of images; were it "barycentric," you would see Pluto and Charon orbit a common center, although that point is significantly closer to Pluto than to Charon. In such a frame of reference, you would see the two locked in their endless face-to-face tidally-locked dance.
*******


The New Horizons mission control also released new color photos of Pluto showing its two hemispheres. This includes the "encounter hemisphere" that New Horizons will see and the opposite one on its impending July 14, 2015 flyby of the Pluto system. 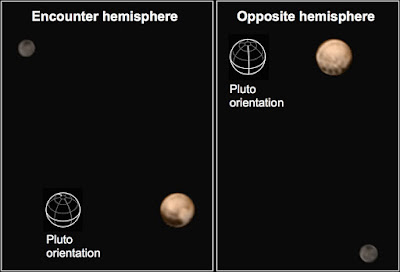 Caption: "Pluto shows two remarkably different sides in these color images of the planet and its largest moon Charon taken by New Horizons on June 25 and June 27. The images were made from black-and-white [LORRI] images combined with lower-resolution [Ralph] color data. The left image shows the side of Pluto that will be seen at highest resolution when New Horizons makes its close approach on July 14. The hemisphere is dominated by a very dark region that extends along the equator. The right image is of the side that faces Charon; the most dramatic feature on this side of Pluto is a row of dark spots arranged along the equator. (The equator appears near the bottom of the images, as only about half of the planet is shown.)"
Image credit: NASA/Johns Hopkins University Applied Physics Laboratory/Southwest Research Institute
Just as an aside, it is worth looking at both the New Horizons Mission Home Page and the NASA New Horizons page for image and video updates since these two sites are posting different content. 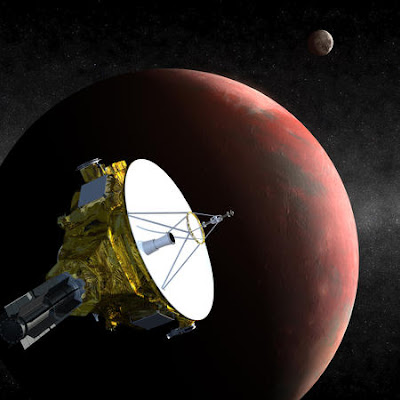 WE LOVE YOU, NEW HORIZONS! GO, LITTLE ONE, GO!
Blog Editor's Note: I will be covering New Horizons' rendezvous with the Pluto system on this blog very closely during the month of July. The encounter with "dwarf planet" Pluto marks the end of the "initial phase" of planetary space probe exploration of the "Canonical Nine" set of planets of our "Terran" Solar System.
--Regulus
Posted by Regulus at 1:51 AM