New Horizons mission control excerpted caption: This is the first movie created by New Horizons to reveal color surface features of Pluto and its largest moon, Charon ... The images were taken between June 23 and June 29, 2015, as New Horizons' distance to Pluto decreased from a distance of 15 million to 11 million miles (24 million to 18 million kilometers). Six high-resolution black-and-white images from New Horizons' Long-Range Reconnaissance Imager (LORRI) instrument were combined with color data from the Ralph instrument to produce the movie.
Source here.


This is not an Independence Day message (from yesterday) that I wanted to post but here goes anyway ...
July 4, 2015


The New Horizons spacecraft experienced an anomaly this afternoon that led to a loss of communication with Earth. Communication has since been reestablished and the spacecraft is healthy.
The mission operations center at the Johns Hopkins University Applied Physics Laboratory, Laurel, Maryland, lost contact with the unmanned spacecraft -- now 10 days from arrival at Pluto -- at 1:54 p.m. EDT, and regained communications with New Horizons at 3:15 p.m. EDT, through NASA’s Deep Space Network.
During that time the autonomous autopilot on board the spacecraft recognized a problem and – as it’s programmed to do in such a situation – switched from the main to the backup computer. The autopilot placed the spacecraft in “safe mode,” and commanded the backup computer to reinitiate communication with Earth. New Horizons then began to transmit telemetry to help engineers diagnose the problem.
A New Horizons Anomaly Review Board was convened at 4 p.m. EDT to gather information on the problem and initiate a recovery plan. The team is now working to return New Horizons to its original flight plan. Due to the 9-hour, round trip communication delay that results from operating a spacecraft almost 3 billion miles (4.9 billion kilometers) from Earth, full recovery is expected to take from one to several days; New Horizons will be temporarily unable to collect science data during that time.
Status updates will be issued as new information is available.
Come on, baby, don't do this; you're nearly there after all these years. Just a little bit more ... 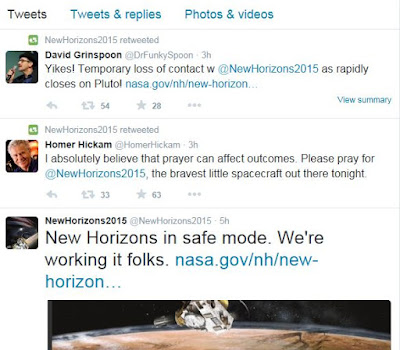 In other New Horizons news ...

New Horizons mission control caption: What color is Pluto? The answer, revealed in the first maps made from New Horizons data, turns out to be shades of reddish brown. The mission's first map of Pluto is in approximate true color – that is, the color you would see if you were riding on New Horizons. At left, a map of Pluto's northern hemisphere composed using high-resolution black-and-white images from New Horizons LORRI instrument. At right is a map of Plut's colors created using data from the Ralph instrument. In the center is the combined map, produced by merging the LORRI and Ralph data.
Excerpt:


Although [Pluto's true color] is reminiscent of Mars, the cause is almost certainly very different. On Mars the coloring agent is iron oxide, commonly known as rust. On the dwarf planet Pluto, the reddish color is likely caused by hydrocarbon molecules that are formed when cosmic rays and solar ultraviolet light interact with methane in Pluto's atmosphere and on its surface.
"Pluto's reddish color has been known for decades, but New Horizons is now allowing us to correlate the color of different places on the surface with their geology and soon, with their compositions," said New Horizons Principal Investigator Alan Stern, of the Southwest Research Institute, Boulder, Colorado. "This will make it possible to build sophisticated computer models to understand how Pluto has evolved to its current appearance."
Experts have long thought that reddish substances are generated as a particular color of ultraviolet light from the sun, called Lyman-alpha, strikes molecules of the gas methane (CH4) in Pluto's atmosphere, powering chemical reactions that create complex compounds called tholins. The tholins drop to the ground to form a reddish "gunk."
*******

I'm very worried but I will keep my hope and faith for now.


UPDATED 12:45AM 7/6/2015: The New Horizons probe appears to have recovered, is resuming normal operations! New Horizons mission control posted the following update on July 5th; direct link here.
July 5, 2015
New Horizons Plans July 7 Return to Normal Science Operations
NASA's New Horizons mission is returning to normal science operations after a July 4 anomaly and remains on track for its July 14 flyby of Pluto.
The investigation into the anomaly that caused New Horizons to enter "safe mode" on July 4 has concluded that no hardware or software fault occurred on the spacecraft. The underlying cause of the incident was a hard-to-detect timing flaw in the spacecraft command sequence that occurred during an operation to prepare for the close flyby. No similar operations are planned for the remainder of the Pluto encounter.
"I'm pleased that our mission team quickly identified the problem and assured the health of the spacecraft," said Jim Green, NASA's Director of Planetary Science. "Now - with Pluto in our sights - we're on the verge of returning to normal operations and going for the gold."
Preparations are ongoing to resume the originally planned science operations on July 7 and to conduct the entire close flyby sequence as planned. The mission science team and principal investigator have concluded that the science observations lost during the anomaly recovery do not affect any primary objectives of the mission, with a minimal effect on lesser objectives. "In terms of science, it won't change an A-plus even into an A," said New Horizons Principal Investigator Alan Stern of the Southwest Research Institute, Boulder.
Adding to the challenge of recovery is the spacecraft's extreme distance from Earth. New Horizons is almost 3 billion miles away, where radio signals, even traveling at light speed, need 4.5 hours to reach home. Two-way communication between the spacecraft and its operators requires a nine-hour round trip.
Status updates will be issued as new information is available.
*******