OK, I am back from a rather wonderful wedding reception day ... although I MISSED the ceremony and feel like shit about that (all the more so because everyone was so nice about it and actually wanted me there). Not only that, but I was the least nice dressed among the family and friends there. Furthermore, I sat at the table at the Friendship Heights with Nick's parents and grandmother (!) -- all down from Massachusetts (the Braintree, Quincy, Watertown area). 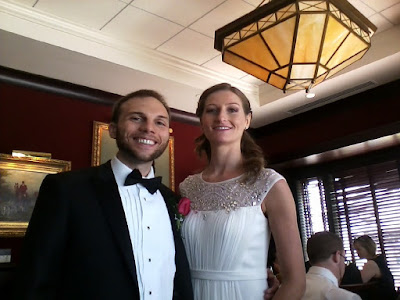 
Later, I went to the National Cathedral in an Uber with Andrea, Imara, Matt, and Daria. It was my first such Uber ride -- the driver laughed when I said that, and it was such a nice route we followed through residential upper Northwest D.C.)
A short time later, the wedding party showed up and Jake took lots (approx. 500!) photos of Nick and Luana and family and friends (I'm in some of the photos), and I walked around the interior of the cathedral (we didn't have to pay the mandatory-voluntary $10 at that point) with Andrea, Imara, Matt, and Daria. 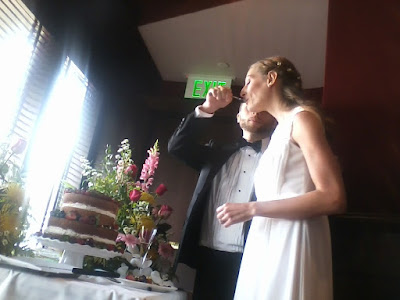 
Thereafter, we went to Barcelona restaurant and wine bar on Wisconsin Avenue in the Cathedral Heights section of D.C. and had a lot of drinks and light appetizers. The staff were very attentive to us even as the place became quite crowded.
I have lots of pictures and Jake has even more that I intend to post at some point. 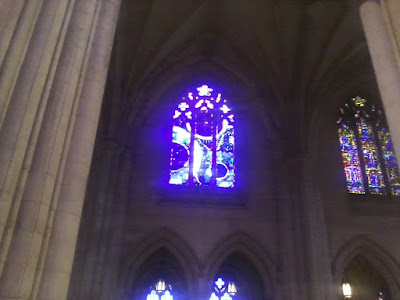 This is the Scientists and Technicians Window -- a.k.a., the Space Window -- at the Washington National Cathedral, Washington, D.C., 4:09PM July 25, 2015.
This stained glass window incorporates a 7.18-gram basalt lunar rock brought back and given to the Cathedral by the crew of the Apollo 11 mission. The full story is available here.
*******


As for now, I am attempting to post a jukebox Saturday night entry while running up against the clock. (You see, I can temporarily disable Barracuda, but it re-enables itself after a few seconds, and I can only do it three times before I have to reset the counter, as it were, by "rebooting" the computer (which means shutting it down and restarting it).)
This is my weird life.
Anyway, for the next song, this seems appropriate for today ...
"Wedding Bell Blues" by The 5th Dimension from the group's The Age of Aquarius release (1969)
This was actually the No. 1 song -- on the Billboard Hot 100 list -- the week I was born (Nov. 26, 1969).
*******


Oh, yes, I ate and drank a lot today (although I had more the vodka drinks than wine at Barcelona).
I might be meeting up with some of them later tonight. I walked to the intersection of Wisconsin and Massachusetts Avenues and caught a fortuitously timed N6 bus that brought me to Dupont Circle in literally 5 minutes and biked the short way home (to be clear, I rode my bike to the Dupont Circle southside entrance this late morning).
And to end this jukebox Saturday night edition, this also seems appropriate ...

"Better Be Good To Me" by Tina Turner from her Private Dancer album (1984)
Tina Turner and I have the same birthday -- November 26th -- except she is 30 years precisely older than me. And looks much better.
*******


OK, that's all for now. For tomorrow, I am planning on taking a bike ride and meeting Quill for lunch in Bethesda. Right now, I'm headed back out to meet the group at a place on U Street.
--Regulus
Posted by Regulus at 10:46 PM