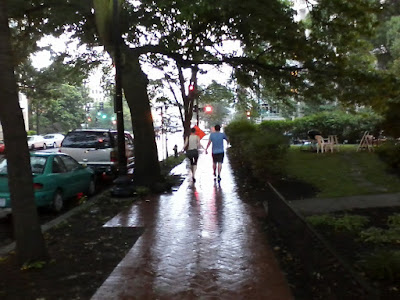 A couple walking in the rain, 1300 block New Hampshire Ave NW, Washington, D.C., 4:38PM July 4, 2015.
It was just starting to downpour at this moment. The couple -- I think they were actually Italian -- and I took refuge across the street in the same spot (see below). Everybody outside got quite wet in the downpour. This included all people wearing American flag-themed undergarments and beachwear as "street clothing."
Blog Editor's Note: When (and if) I post a full update of my July 4th doings, I will be reposting the three images included in this entry.
*******


This is the quickest of quick entries since I need to meet Wendy a bit later (bike to her place) and then I'll take a longer bike ride this afternoon. I just posted the HOPEFULLY TEMPORARILY worrying news about the New Horizons space probe (so close to Pluto!).
My July 4th was, in the end, fine. I have a number of pictures to post plus narrative.
As the briefest of updates, I walked to Foggy Bottom Metro from my apt., getting caught in of this summer's seemingly ubiquitous downpours, waiting it out for 20 minutes at the Hamilton House outdoor entrance. (KDCA recorded another 0.85" of rainfall yesterday including 0.63" in that event. The other three main weather regional stations had less.)

After the rain let up, I continued on my way and went to Ballston to Jake and Matt's place. While there, I played a couple games of "Cards Against Humanity" with a group of 20-somethings including also Nick and Jack's brother, Ethan, visiting from Indiana. This is a inherently deeply offensive card game but source of many laughs. Oh, and we watched the movie Independence Day that was on continuous loop on some cable channel. 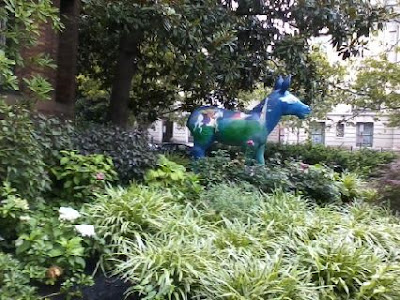 
Later, I walked from Rosslyn Metro back to Dupont Circle via Georgetown in a night featuring a pure maritime tropical (mT) air mass, low clouds, and very humid but not oppressively warm conditions (76F air temp over 71F dew point). I actually saw the glow and tops of the fireworks on the National Mall in the soft night as I walked from Georgetown into Dupont. The streets were temporarily semi-deserted, which was nice. Their muffled thunderous reverberations made for quite an effect, as if in some warzone.
It turns out you can see the fireworks display surprisingly well from Dupont Circle looking south down 19th Street (they are shot off pretty much from that "longitude"). 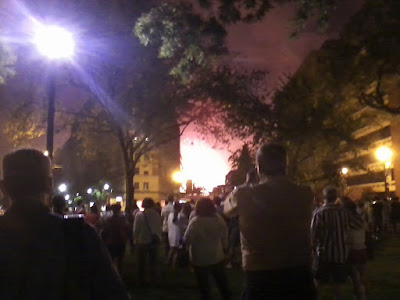 A blurry picture with my flip-open cellphone showing the glow of the National Mall Independence Day fireworks display as seen about 1-1/2 miles away from Dupont Circle, Washington, D.C., 9:26PM July 4, 2015.
*******


Oh, yes, Georgetown was so quiet and serene -- not the usual let's-set-off-fireworks--everywhere explosive, sulfurous extravaganza in poorer areas. I was going to say "white trash" but it's really a ubiquitous feature of any lower income neighborhood of any race or ethnicity.
I guess really rich and powerful people don't to blow up the world that they already own.
Anyway, I had dinner at Dupont Italian Kitchen (INSIDE with the nice music and subdued atmosphere) with Dave joining me. Thereafter, I went to No. 9, had several drinks at bartender Jose's well (the music was too loud upstairs where I think it was "DILF" night), and walked home.
I might not be able to post an entry until tomorrow night, but I do want to post my pictures from yesterday.
Oh, yes, late last night after I got home, I updated last night's Jukebox Saturday night entry to note the number of hits of the third song, and now -- having posted a link to it owing to its phenomenal 2.3 billion YouTube hits (and counting) -- I have that goddamn "Gangnam Style" song AND its video, neither of which I had never actually seen before, stuck in my head. 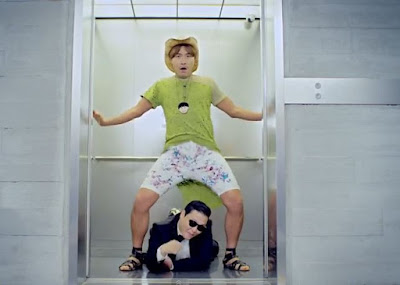 Screenshot from that ridiculous "Gangnam Syle" video. I have no frickin' idea what supposed to be going on there.
May it get stuck in your head.