A Thursday Morning Brief (Blog Entry, That Is) 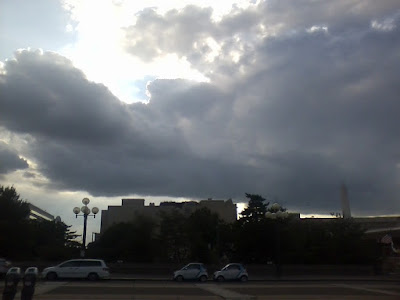 Clouds in the early evening sky above L'Enfant Promenade with the Washington Monument visible to the right, Washington, D.C., 6:14PM July 15, 2015.
Also visible in this image are two of those little "Car2go" cars that as a pedestrian I don't full trust precisely because of their small size. I'm not sure if they are electric vehicles or not. They look it. I think they're banned as instruments of Satan in Alabama.
As for the weather yesterday, it included a few brief scattered tropical-like showers due to an upper level low spinning over New Jersey but for the second time this past week, a flash flood watch proved totally unnecessary. Mostly, it was just partly to mostly cloudy, warm, and humid.
*******


Apologies for lack of updates -- except for the wonderful New Horizons news that only kept getting better! following the successful Pluto flyby -- but I've been very busy this week and unable to post.
I intended to post an entry last night, but in lieu of the gym, I did one of my weekday "happy hours" involving Baan Thai (the old Tsunami) (with Andrea) and No. 9 (with Gary) that then included, briefly, a stop at Larry's Lounge.
By the time I got home, I was too tired to post the entry I wanted -- in addition to which, my attempted entry quickly got too vitriolic about the Greek situation and what Germany is doing. I just couldn't post anything that topic.
Anyway, that aside, my intention is to post a more complete entry tonight after work and the gym. As for the New Horizons' pictures, I will post those in a subsequent entry over the weekend.
--Regulus
Posted by Regulus at 9:49 AM