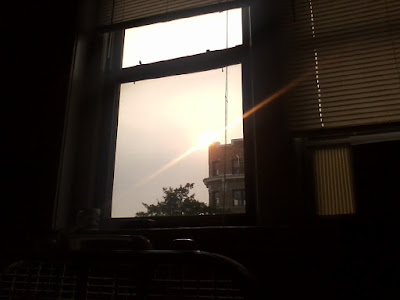 The low-angled evening Sun as seen from my apartment window sinking behind the top tip of the Brittany, Washington, D.C., 6:44PM June 9, 2015.
Note the pinkish-orange dullness of the Sun and vapid beige-pink-yellowish sky (it seems to be all three colors). This sky condition, as I suspected, from very distant forest fires, specifically, fires burning in Saskatchewan. The high-level smoke was lofted across all that distance on a northwesterly flow behind a (summer season) cold frontal passage. I found this online article from the Chicago Tribune as the smoky particulate matter passed over the Chicago area.
The sky over D.C. is back to a dull whitish-blue today.


UPDATED 12:02PM 6/10/2015: The Capital Weather Gang has this entry about the smoky skies along with some great pictures and satellite images. It states that the smoke is from large wildfires burning in Alberta and British Columbia, not Saskatchewan. It's too late to update the title of this blog, though, to "Alberta Smoke Clipper." 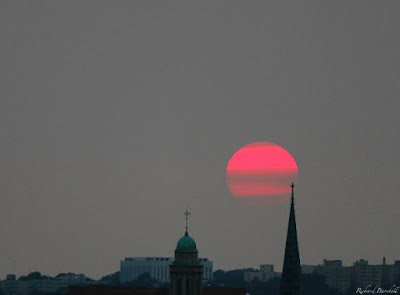 A red sunset over upper Northwest Washington, D.C., June 9, 2015 in a picture taken by Richard Barnhill that appears in the above-linked CWG entry.
The large white building behind the dome is, appropriately enough, the Russian Embassy. Uh, oh: Maybe it's an omen.
End of Update.


My planned entry did not happen last night because I ended up meeting Gary at No. 9 to discuss with him the situation involving his mother (it's not good). I did this in lieu of my planned "supplemental" gym workout -- although that was mostly just going to be a swim in the big pool at the National Capital YMCA rather than my usual Anthony Bowen YMCA -- but things didn't turn out that way. 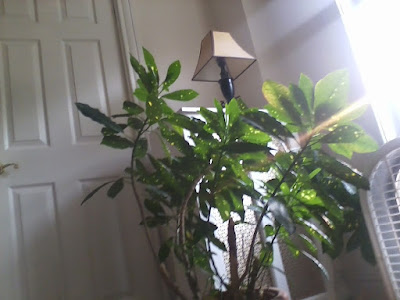 
For starters, my fascist planter plantar fasciitis was acting up, and I couldn't do a jog tonight, esp. if I want to try to do my usual 6-1/2 mile jog tomorrow. More importantly, I was just tired, no, exhausted and any workout I did tonight would be a big drag on anything I do tonight. Thursday and Friday nights are off ones from the Gymnasium of Young Christian Men.
Anyway, I came home and went to bed, and now it's morning and I have to get to work. I'll try to update the blog tonight.
--Regulus